Pre MXGP of USA Festivities on Tap for So Cal Area

The MXGP boys are headed to Southern California for the final round of the FIM Motocross World Championship. Here’s how you can meet them. 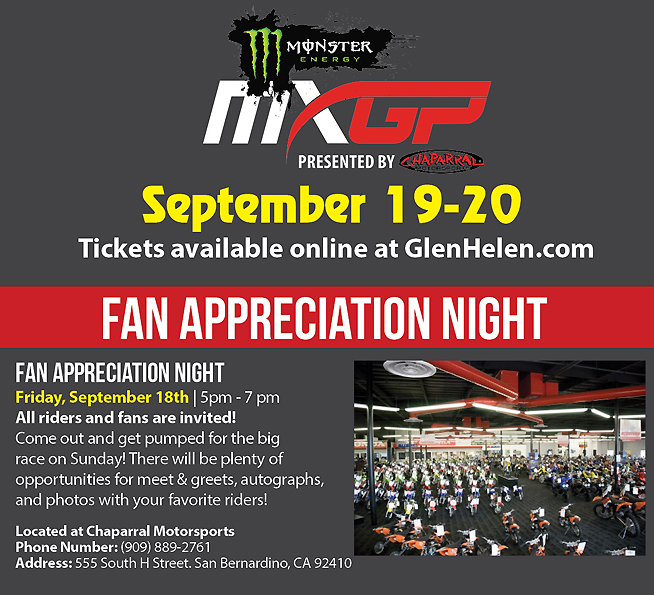 The Monster Energy MXGP of USA is set to take place this weekend at Glen Helen Raceway, but motocross fans will have a chance to meet the stars of the FIM-sanctioned series in a special fan appreciation night at Chaparral Motorsports in San Bernardino, just down the road from Glen Helen, on Friday night, September 18.

Chaparral Motorsports Fan Appreciation Night is scheduled to take place from 5 p.m. to 7 p.m. PT, and it will feature a mix of top talent from the Lucas Oil Pro Motocross Championship as well as from Europe. Fans will have the opportunity to meet the riders get autographs, and take photos with some of the sport’s biggest names from at home and abroad. The trio of Tom White, Erv Braun and Paul Milan will serve as event emcees.

The first 100 fans at Chaparral Motorsports Fan Appreciation Night will also receive a copy of the original USGP poster created by legendary racing artist Troy Lee. This exclusive piece of artwork was made especially for Glen Helen and the USGP. The poster can also be purchased at the event for $5.

**Riders who are schedule to appear include:

But the pre-MXGP of USA festivities will actually begin on September 17 with a special book signing and movie night hosted by Malcolm Smith Motorsports in Riverside, California, from 4:30 p.m.-9:00 p.m. Smith, an AMA Hall of Famer, pioneering racer and businessman, will be on hand to meet with the fans, sign his book and autographs, and watch filmmaker Todd Huffman’s latest MX Files movie featuring the great Brad Lackey. Tom White, himself an AMA Hall of Famer, will be the emcee for the festivities.