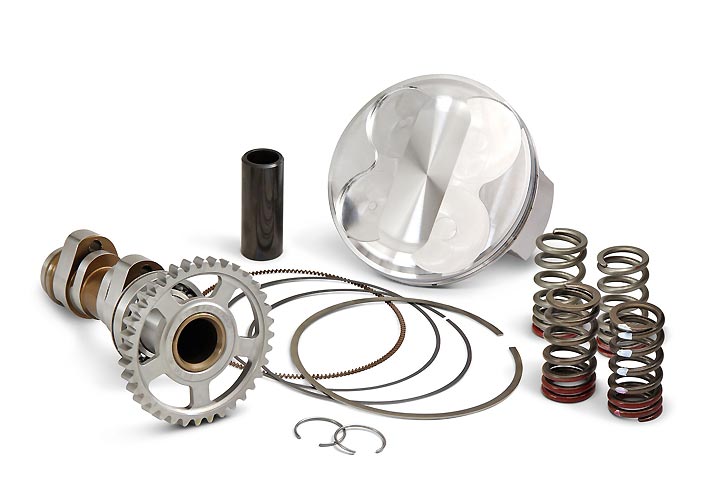 Designed to increase power at all rpm levels, the Performance Engine Package for the 2017 Honda CRF450R/RX consists of a high-compression
piston kit, camshaft and valve springs. Pro Circuit says that each part has been designed and tested to complement each other in achieving the intended peformance boost.

The high-compression piston kit is manufactured by renowned piston manufacturer JE Pistons to Pro Circuit’s specifications. It is claimed to provide a significant increase in both low-end torque and high-rpm horsepower. The kit also features the company’s latest camshaft design for the 2017 CRF450R/RX. It is designed to enhance power by optimizing the valve lift profile, according to the company. To prevent valve train bounce, Pro Circuit’s heavy-duty valve springs area also used.

Pro Circuit emphasizes that the Performance Engine Package for the 2017 Honda CRF450R/RX is designed as a complete system, and that the individual components are not sold separately.

One-time desert racing pro and motor tuning specialist Mitch Payton, founded Pro Circuit in 1978 at the age of 18. Early customers were mostly Husqvarna-mounted desert racers and motocrossers who wanted Payton to provide the same speed set-ups that he and his father had learned to dial in on Payton’s personal race machines. Word regarding the success of Payton’s motor building skills traveled quickly around southern California racetracks. Payton closed his family’s Husqvarna dealership in 1980 to focus on his aftermarket hop-hop service business full-time.

After perfecting his skills in the black arts of cylinder porting and polishing, Payton and his small-but-elite team of speed specialists focused their collective energy on other bike parts and other brands. Custom-tuned exhaust pipes were the first Pro Circuit high-performance accessory to roll out of the shop, followed by racing silencers. Pipe business was brisk, and pretty soon every PC-equipped racer was requesting PC performance modifications for other parts of their bike. Pro Circuit obliged by opening a suspension shop and expanding the available line of Pro Circuit exhaust systems and motor accessories for different bike brands. With so many Honda, Kawasaki, Yamaha and Suzuki-mounted racers across the nation running Pro Circuit equipment, it didn’t take long for the company to start racking up championships. Pro Circuit’s phenomenal racing success rekindled Payton’s competitive fires, so in early 1990 he set Pro Circuit’s sights on winning a national motocross championship. But doing so would mean challenging the Big Four at their own game and would require some serious financing. To make this goal a reality, Payton borrowed a strategy from the auto racing game, securing a corporate sponsor. By doing this, Payton changed the way motocross teams would be financed and packaged forever.

In 1991, Payton and a four-man team of relatively unknown motocross racers (including a kid named Jeremy McGrath) contested in the AMA Supercross series under the Peak Antifreeze, Pro Circuit and Honda banners. Six months later, that team swept the 125cc East and West Supercross championships, beginning a racing legacy that continues today.