Alpinestars pretty much created the motocross boot, and it has continued to be a driving force in the advancement of rider safety and comfort ever since.

The Alpinestars Tech 10 is the pinnacle of the Italian company’s efforts, which began in 1965, just two years after it was founded by Sante Mazzarolo to create safer and more technically advanced hiking and alpine ski boots. Today, the famous A-star logo is immediately recognizable as one of the premier brands in all of motorsports, two wheels and four. A technological tour de force of Alpinestars design, the Tech 10 is worn by such top AMA National Motocross stars as Eli Tomac, Justin Barcia, Trey Canard, Cole Seely and Marvin Musquin, and the latest version boasts an all-new closure system that improves its functionality even more.

When it comes to material selection, there’s a lot going on with the Tech 10 boot. It’s constructed using a one-piece co-injected foot chassis made of five different advanced polymer compounds to add strength while maintaining flexibility. The lightweight upper is a mix of full-grain leather with lightweight microfiber and an impact and abrasion resistant Thermoplastic polyurethane (TPU) shell. The medial outer panel is made from a specially formulated polymer to give the Tech 10 even more structural stability, and the inner panel is designed to help the rider grip the bike better.

The Tech 10 doesn’t scrimp on protection. Its shin incorporates a unique TPU blade system that is designed to prevent frontal hyperextension and offer greater flex control, while a contoured TPU calf protector plate is used to enhance the boot’s impact resistance. Alpinestars engineers added a polymer rear blade system to better protect the rider’s heel. The system also features a rear hyperextension guard. A multi-density foot shell is used to protect the rest of the foot. Alpinestars claims that it is highly resistant to abrasion and impact, and adds to the boot’s overall durability. 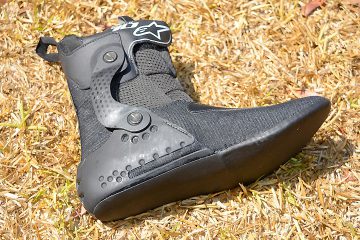 There’s even more protection inside the Tech 10, which contains Alpinstars’ removable bootie system. The bootie features a biomechanical inner ankle brace with medial and lateral “C” torsion bars to help control ankle and leg rotation, while allowing the wearer to maintain freedom of movement. Think of them as a steering damper or a rising rate shock linkage: The torsion bars offer natural ankle movement but progressively damp torsional forces during a sudden impact. More TPU along with shock absorbing padding is used in the heel and ankles, and the forefoot area is designed to be thin and flexible for increased sensitivity and control.

The Tech 10 boot is CE certified, which means that it complies with Europe’s “new approach” safety standards. With all this safety, Alpinestars claims that the Tech 10 boots are still relatively light, weighing it 9.2 pounds per pair in Size 10. We weighed our Size 10s, and they were close, coming in at 9.4 pounds for the pair.

Wearing The Tech 10
If you’re an Alpinestars customer, then you know how frustrating the old buckle design could be—you could call it the Achilles’ heel of previous Alpinestars boot designs. The new buckle closure system uses what Alpinestars calls aluminum bridge closures with a self-aligning, quick release/locking system. Basically, the male end looks like a fish hook, and the female and features a sturdy aluminum loop that allows for better leverage when closing the boot. The entire system works much smoother than the previous design, making opening or closing the boot much less of a pain. It’s also adjustable via serrated straps, which allow the rider to open up the boot to accommodate large knee braces and the like. The very top of the boot is still secured using a Velcro panel, which also offers a degree of adjustability.

With older Alpinestars boots we’ve tried, the bootie made slipping your foot into the boot look like you were trying to audition for the WWE, but the Tech 10s slid right on with no trouble, even though some of our testers wear thicker-than-average motocross socks. Our three-man test crew favored the comfort and fit of the bootie by a 2-1 margin; the stubborn holdout admitted that he simply doesn’t care for the booties and would prefer to wear a boot that doesn’t use them.

We expected the initial break-in of the Tech 10s to take a long time, but some of our testers were pleased with how flexible the boots were right out of the box. Some of our more sensitive thought that they were quite stiff but only took a few rides to break-in to an acceptable level of flexibility. Once broken in, the Tech 10s offer excellent ankle flexibility and are actually fairly easy to walk in if necessary. When riding, we were pleased with how easy it was to rotate the ankle in order to slip the toe under shift lever, and the TPU grip on the left toe is sensitive enough to allow the rider to feel the shifter.

During one of our test rides at Competitive Edge in Hesperia, California, DirtBikes.com testing stud Ryan Abbatoye managed to have one of his feet come off the pegs, stuffing his toe into the ground and effectively running it over when the footpeg hooked the shaft of the boot. We’re fairly confident that in a cheap boot this little faux pas would have resulted in a broken foot or ankle, but while tweaked and sore, the “RAD” one’s tootsie was not severely damaged.

At MSRP $599.95 Alpinestars Tech 10s aren’t cheap, and if you’re interested in saving a few bucks while still owning an Alpinestars product that incorporates some of the Tech 10’s features, then you might want to look at the company’s more consumer friendly-priced Alpinestars Tech 8 RS. But, if you want a true top-of-the-line product that incorporates the latest and greatest safety technology in a supremely comfortable package made by a company that has over 50 years of experience in motocross boot design, the Tech 10 is your boot.

Alpinestars Tech 10s are available in full sizes only from Size 7 through Size 14, and in a variety of colors, including Black, Black/Green, Black/Red Yellow, White, White/Orange, White/Red/Blue and White/Red/Yellow. Alpinestars also offers the Tech 10 in Limited Edition Tomac, Barcia, Canard and Venom colors.