Ride Engineering is a fairly well-known manufacturer of aftermarket accessories for dirtbikes, and the company’s billet-aluminum triple clamps have been used by factory teams and other top racers for the past two decades.

But despite manufacturing clamps for just about every full-sized late model machine, Ride Engineering had never ventured into the minicycle market until now. Ride Engineering owner Adrian Ciomo believes that mini riders need love, too, so to roll out the first in what he hopes will be a new product line, he decided to take a beat-up Yamaha YZ85 and turn it into something worthy of showcasing Ride Engineering’s beautiful clamps.

“We have been getting requests for mini clamps,” Ciomo said. “I don’t know why, but I just picked a Yamaha YZ85 because I knew a used one could be had for cheap, and it has been virtually unchanged for years. I mean, these clamps go from 2002 to the current year. That’s 15 years’ worth of bikes.”

“The point of the whole project was to introduce our triple clamps,” Ciomo said. “The bike I found was one that some kid had ridden around in the desert and scratched all up, so I needed to make it look nice again. I just started reaching out to some companies that I’ve worked with in the past.”

Aftermarket plastic giant Acerbis came through with an entirely new set of YZ bodywork that not only replaced the thrashed OEM plastic but also modernized the look of the bike.

“Yamaha has remodeled the bodywork over the years, but the chassis is the same, so it’s cool that you can put the new-style plastic on an older bike and made it look like a new one. After we put an SDG Gripper seat cover and some custom graphics from Flu Designs, we had it looking pretty good.

One of the few bonuses that Ciomo found after buying the bike was that it was fitted with a Moto Tassinari VForce3 Reed Cage, which is designed to increase power and throttle response. To pull even more power from the otherwise stock engine, Ciomo fitted an FMF Factory Fatty pipe and Shorty muffler to the bike. FMF says that the Factory Fatty is designed to broaden and smooth out the power curve while increasing thrust throughout the entire powerband, giving the YZ better low-end, more mid-range and increased over-rev. The engine breathes through a brand new DT1 air filter.

As the chain and sprockets on the YZ were pretty used up, Renthal was called on to supply its 428 Front Sprocket and 428 Ultra Light Rear Sprocket along with a new R1 428 Works Chain, which rides on a TM Designworks Yamaha YZ 85 Factory Edition #2 rear chain guide. Renthal also supplied a brand new KTM-bend Fatbar 1-1/8” handlebar, but more on that in a moment.

Although the stickers on the bike say otherwise, Ciomo admits that the stock suspension was in good condition.

“We actually left the suspension alone,” Ciomo said. “The bike is pretty plush, as-is. It’s pretty good. My 15-year-old test rider has modified suspension on his Super Mini, and he didn’t have a complaint about the stock suspension on the YZ85.”

Of course, the heart of this particular build, or at least its reason for being, is Ride Engineering’s new billet aluminum Yamaha YZ85 Triple Clamp Set, which, in addition to being more rigid and better looking, also addresses an issue with the stock cast-aluminum clamp.

“The primary reason that we wanted to make these clamps is because the stock ones come with bar mounts that are cast into place, and that pretty much locks the rider into one position, so even as he grows he is stuck with the same bar position. It also forces the rider to run a 7/8-inch bar, which is much more likely to bend if he wads up the bike.

“You want to be able to offer adjustability for big kids as well as small kids, so our clamps feature four-position adjustability, from zero millimeters out to 20 millimeters out from the steering stem hole. That makes it easier to make the bike comfortable for a wider range of rider sizes. We can also raise the bars 10mm higher (via replacement bar clamps). It helps because a lot of times these kids will stay on minis longer because they want to race the AMA Amateur Nationals at Loretta Lynn’s before they move up.”

One other benefit to the Ride clamp, says Ciomo, is that it also features O-ringed bar mounts to better isolate vibration to the handlebars.

“That’s a design I stole from what we were doing 10 years ago on our bike bike clamps,” Ciomo added.

All Ride Engineering clamps are designed to work only with the larger and more bomb-proof 1-1/8-inch fat bars, and that includes the new YZ85 clamp as well. Ciomo also fitted the YZ with a Ride Engineering Over-sized Bar Mount.

“The bar mounts only held on by a couple bolts rather than being cast into the top clamp, so if a kid wads up hard enough, you’re only going to bend a two-dollar bolt rather than the handlebar itself.”

One other neat trick that Ciomo employed was a Ride Engineering Front Brake Line Reroute Kit that shortens the length of the brake line and also replaces the line itself with a steel braided line.

“Yamaha still wraps the brake line all the way down and under the left fork,” Ciomo said. “The longer the brake line is, the spongier it will feel. The stock line is also made of plastic, and it will expand when it gets hot. Our kit gets rid of that really long brake line, and it is a braided steel line with a direct route, which is how every modern bike comes these days. It just drops down between the fork guard and the wheel, and it takes about 15 inches off the length of the line. It gives the brake a much better feel, and it is less likely to fade.”

Other mods to the Ride YZ85 include new wave rotors and brake pads front and rear from Galfer USA as well as new Bridgestone intermediate terrain tires, an M403 front and M404 rear.

Demand for the Ride Engineering clamps is still in the building phase as people are just getting turned on to the fact that the company is now in the minicycle market as well as the big bike market, but if sales are a success, Ciomo said he will then turn his attention toward manufacturing clamps for Kawasaki and KTM/Husqvarna 85s as well. Again, the wealth of inexpensive minis that dominate places such as eBay and Craigslist could make it worthwhile. 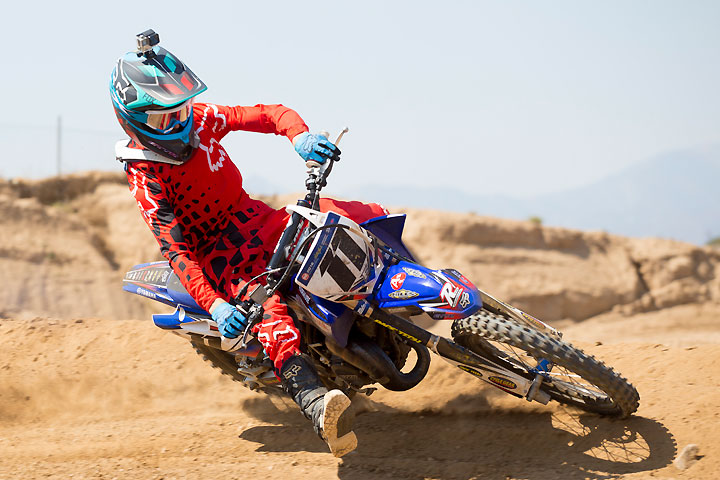 “What’s cool about it is that that guy can get his kid into the sport without spending a lot of money. Even at retail prices, the whole project only cost about $3000, including the price of the motorcycle. You can buy an older bike, trick it out and make it look bitchin’ for your kid, and you still won’t have a lot of money in it.” 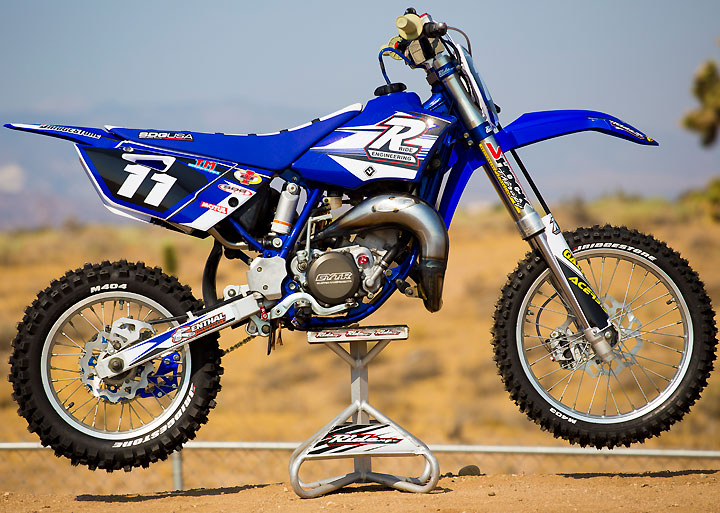