We’ve done quite a few project Lowbucks in the last few years, and we have heard some complaints from readers that we don’t do enough of the smaller bikes.

Well, this project should calm them down. We spent a substantial amount of time looking for a 125 that made sense. After a tremendous amount of looking, we found a 1982 Yamaha YZ125 for sale on Craigslist. The owner was asking $175 for the bike and we got him down to $130. The YZ consisted of the complete rolling chassis and a box full of parts, some of them usable and some not.

In our hurry to get the deal closed, we made a major mistake. There was no exhaust pipe in the pile of parts. The whole concept behind the project Lowbucks is getting a decent dirt bike running without spending a lot of money. However, finding a decent exhaust system for a very good price is one of the hardest things you can do. If you had to spend half of the resto money on the exhaust system to get the bike completed, then you’re defeating the concept of a budget bike.

In the early eighties, motocross technology was moving at blinding speed and in no class was this more apparent than the 125s. The advent of water-cooling, better forks and rising rate suspension systems meant that the performance potential of stock 125s was surpassing that of Works bikes from only a few years before. Each new model brought with it innovations and real improvements that pushed racing technology ever further.

In 1982, Yamaha would introduce the first major revision to their monoshock rear suspension since its inception. The new Mono-X rear maintained the shock placement of the original but mounted it to a new rising rate linkage and redesigned swingarm.

For 1981, the major technological advance was liquid cooling. Used on factory bikes on and off since the mid-seventies, water cooling allowed the motors to be built in a higher state of tune, while also offering increased longevity. Honda, Yamaha and Suzuki all introduced water-cooled 125s in 1981, with Kawasaki remaining the last air-cooled Japanese holdout.

In addition to the new chassis and suspension, the 1982 YZ125 would feature an all-new motor that incorporated a “power valve” the first time. First seen on Works bikes only a few years prior, the power valve was designed to widen the traditionally narrow two-stroke power spread by adjusting port timing to engine RPM. Yamaha named this new technology the YPVS (Yamaha Power Valve System) and it consisted of a small drum placed at the top of the exhaust port, which was rotated based on the action of a small centrifugal ball governor. Depending on engine RPM, the exhaust port height could be raised or lowered by rotating this drum to fine-tune performance and widen the available spread of power.

In 1982, this was the fastest motor in the 125 class by a wide margin. The YPVS-equipped motor was only mediocre down low, but it ripped through the middle and screamed on top. Even with its weight disadvantage and tall stock gearing, the little YZ was more than a match for all comers in 1982. 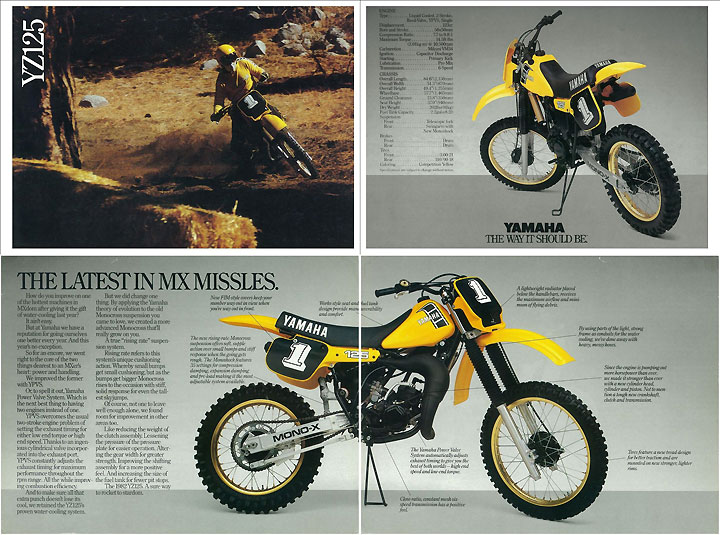