Kawasaki released details of its 2018 motocross lineup today, with the 2018 Kawasaki KX250F getting the lion’s share of updates, including a revised engine that is designed to give a better pull throughout the rev range.

The biggest knock against the 2017 Kawasaki KX250F was its lack of top-end performance despite having a robust midrange snap. For 2018, the KX’s DOHC, liquid-cooled, fuel-injected 249cc four-stroke Single is claimed to benefit from better high-rpm performance and over-rev. In layman’s terms, the KX250F’s thrust will not drop off as readily as the 2017 model’s did.

Engine
To achieve their intended goal, Kawasaki engineers revised the KX250F’s intake tract by shortening the intake funnel and redesigning the intake duct. The intake cam has been advanced to open the intake valves a little sooner, and the KX’s fueling has also been updated via a new fuel pump with increased output as well as a new injector placement angle. The fuel injection system and ECU have also been revised, and a larger and longer exhaust header is incorporated to increase torque and power output, while retaining the resonator chamber. 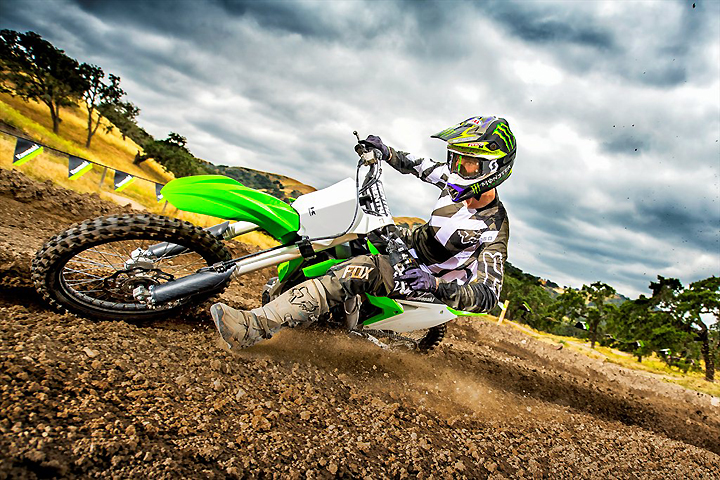 As rpm and throttle position increase, primary operation switches from the downstream injector to the upstream injector, depending on whether in a low (1st, 2nd) or high (3rd, 4th, 5th) gear. The upstream injector’s greater distance from the combustion chamber gives the fuel particles and intake air more time to mix, as well as allowing the mixture to cool before entering the combustion chamber, both of which are said to contribute to more efficient filling, and ultimately more power.

The lightweight ECU is designed to offer a wide variety of tuning options. The Kawasaki KX250F includes three engine maps that come pre-loaded into the motorcycle’s ECU and are easily accessible through the DFI® coupling plug. These three color-coded couplers are designed to tune for hard, medium or soft track surfaces, and allow riders to find the ideal power delivery for a particular terrain.

Using the optional KX FI Calibration Kit (handheld), sold separately as a Kawasaki Genuine Accessory, a rider can store and select from up to seven separate engine maps. The kit includes a portable handheld calibration tool, which enables riders to make changes to the engine maps without the need of a PC, laptop or battery, making it easy to tune at the track. The handheld calibration module plugs in thanks to an additional harness not included in the kit.

Chassis & Suspension
The 2018 Kawasaki KX250F retains the aluminum perimeter chassis design that was introduced in 2017, but the 2018’s suspension has been fine-tuned for better bump absorption and improved handling. Up front is a revised Showa 48mm Separate Function Front Forks (SFF Type 2) with works-style internal construction that locates its damping assembly in the left fork tube and a spring in the right. For 2018, revised settings contribute to greater precision over braking bumps and through corners.

The KX250F features a Launch Control system that, with the simple press of a button, allows riders to activate a separate engine map designed to assist starting in certain conditions. The Launch Control Mode map retards ignition timing, allowing tires to gain grip in low-traction situations, and allows riders to focus on their lines. Launch Control remains active through first and second gear, until the rider shifts into third gear, and then it returns to normal engine timing.

Even for top-level riders, controlling the hard-hitting power of a KX250F motocrosser off the start requires a high degree of throttle control and clutch finesse. By optimizing this power, Launch Control Mode helps riders maximize traction, increasing the chance of getting a good start.

Brakes
Contributing to the racing components found throughout the KX250F are the brakes. Up front is an oversized 270mm Braking brand rotor, which delivers strong braking force and superb control. The petal style discs contribute to both sporty looks and help deflect debris. Rear caliper guard helps protect the caliper from damage.