Rick Sieman: Getting to a Desert Race is the Hardest Part 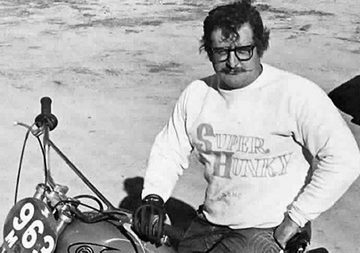 In the early days of desert racing, we ran around in a near state of panic half the time on the way to a race. We just didn’t know the “regular” places and the directions they gave on the info sheets, or in the weekly motorcycle rags, were more often than not hopeless. There’s a whole lot of reality in this frenetic column.

I ride a lot of desert. It’s sorta neat—you get plenty of riding in and see some truly astounding terrain. And when you’re done with a day of riding in the desert, baby, you know that you’ve put some time in the saddle. You’re good and tired and you’re flat filthy.

But that’s not the hard part—the racing, I mean. Nope. The hard part is getting there. Finding the damn place you’re supposed to race at.

Like the one morning my old buddy Tom and I headed out for a Hare Scrambles:.

It wasn’t even daylight yet, and there I was sitting out in the garage, half naked, putting on my leathers, drinking a cup of coffee and flicking through a print motorcycle pub to get the directions to the race. Tom was late, as usual. If I want to leave at 4:30 for somewhere, I tell him to meet me at 4:00. That way, he’ll show up at 4:45. So I don’t bother to get up until 4:30 and everything works out just perfect. It’s admittedly a strange system, but I haven’t thought of a better one yet.

I had a hell of a time getting the zipper of the leathers up, what with all the dirt from two months of racing saturated in the teeth. I made a mental note to wash those leathers before the next race. A certain fragrance was there—that I was sure would go away if I washed them—despite the liberal use of a half can of baby powder.

The sound of a garbage can falling over signified Tom’s entry into the driveway. I never did mind Tom knocking my garbage can over with his van, but trash pickup is always on Monday in my neighbor¬hood, and the can is usually full. He would generally knock it over two out of three Sundays. If the can was empty, he’d never hit it.

“Hey Rick,” he bellowed, “let’s hit it. Don’t wanta be late for the old races, eh? Sorry about the can. I’ll buy you a new one, one of these days.”

Several lights went on across the street and I saw a head peering out between some curtains and I think I heard some muttered swearing. We picked up some of the trash—I stuck some in the back of Tom’s van when he wasn’t looking. Behind the seat where he wouldn’t find it for a while. After loading the bikes, we headed out toward the desert. The first part was easy … 70 miles per hour steady out the freeway. The truck, purring along on most of its asthmatic cylinders, made cruising a breeze. We passed several bikers along the way and waved. I felt a little stupid when I waved at a pickup full of lawnmowers and several early morning gardeners on their way to do whatever gardeners do. If you’re not really awake, they look a lot like CZ handlebars, those lawnmowers.

Tom had circled the event and was reading the directions out loud “Just go on this road, until you get to Avenue J. Then look for lime marks. That’s all it says.”

A half-hour later, we were at the intersection in question. Lime marks were at three of the corners. Hmmm. Now what? We stopped in the gas station and questioned the attendant . . . “Uh, say, do you know where they’re holding the races today, friend?”

“Sickle races. They’re having a desert race and we’re not sure which road to take. Have you seen any trucks go by with bikes on them?”

“Bikes are dangerous, sonny,” he intoned, “Had a nephew got all busted up on one a them things. Big cee-ment truck ran right over his elbow. Kid ain’t been the same since. Usta play a helluva game of baseball, but not anymore—just can’t throw his knuckleball anymo …”

Just then a truck loaded with scoots went by, heading east. We fired the El Camino up and left the attendant in mid-gripe.

“Boy, did we luck out,” said Tom, “all we gotta do is follow these guys and we’ve got it made.”

After following the truck for 15 miles, I noticed something a little strange . . . none of the bikes had number plates on them. Damn!

“Uh, say Tom,” I asked offhanded¬ly, “do you notice anything strange about those bikes we’re following?”
“Well now, lemme see . . . hmmm Oh yeh, that red CZ has a 15-tooth countershaft sprocket on it, instead of the normal 13. Far out.”

Damned CZ freaks. Put one of those bikes in front of ‘em, and they’d never notice a safe falling on their foot. I stopped and pulled off the side of the road and told Tom about the lack of number plates, and the obviousness of our error. We looked at the time. It was getting late.

Swoooooooossssssshhhhh! A trailer full of bikes blew by, heading in the opposite direction. Hot dog— they had desert number plates all over the scoots. We pulled a classy looking U-turn and boogity-shooed down the road. We settled down and pulled in be¬hind the trailer at a comfortable distance. Strangely, they started to slow down. So, naturally, did we. The driver of the car rolled down his window, leaned out and yelled.

“Hey, do you guys know where they’re holding the race today? We’re lost as a bunch of little lambs.” Christ almighty. The blind leading the blind. A quick conference showed that nobody present knew where to go from here. Puzzle, puzzle. Mutter, mutter. Assorted mumbling.

Another pickup, heading the opposite direction (also loaded with bikes) toot-tooted at us and yelled: “This waaayyyyy!” Whoopie. A leader. The guy
pulling the trailer spun a clumsy U-turn, almost tipping the bikes off in the process.

Hmmmph. We would instruct him as to the fine art of turning around in less than its own distance. Vrrrrmmm, vrrrrmmm. Gawd. What neat maneuvering. The occupants in the other vehicle looked in awe as our truck hurtled by.

I reached for a cigar on the dash and congratulated Tom on our good fortune, when he slumped down in the seat and told me to save the congrats. The red light blinking in my mirror told me why. Oh, oh. One of the gentlemen of the law. After several dozen “yes sirs” and “no sirs” and “yeh-I-should-know¬betters,” he gave us our ticket and motored off into the distance. This one would be worth the price of a new knobby, at least.

The truck in front of us was gone. Clean out of sight. We rode back to the gas station, reread the directions, ran up and down every section of the highway leading in and out and, in general, piddled away a good two hours without finding anything.

Finally, being totally disgusted with the whole thing, we decided to just forget about racing and go trail riding somewhere. Tom suggested Red Rock Canyon, a place not too far up the road. Why not? When things get like this, one place is as good as another.

As we neared Red Rock, I saw a haze of dust hanging in the air. Either a whole bunch of people were trail riding out here, or … OH NO! Yep, that’s where they were holding the race. Feverishly, we headed for sign-up and, just as the pencil inscribed my AMA number down on the entry blank, a giant roar told me something. The race had just started.

I looked at Tom. He looked at me. I walked to the cooler and got a six-pack of beer. Tom said, “Better bring the other one, too. It looks like we just can’t do anything right today.”

He was right. The beer was warm and, if I remembered correctly, the ice was left sitting on top of the $10 Maico manual in my garage.