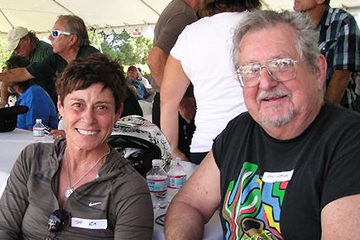 There are those who claim that flat track racing is the most dangerous thing you can do on a bike. Others say that going flat-out in Baja is treacherous. Some mention ice racing on spiked tires as a sure path to the Pearly Gates. Their detractors point out the controlled lunacy of road racing and the close-in violence of stadium moto­cross.

Hah! The most dangerous thing you can do with any racing bike, without exception, is to load or unload the thing—from whatever conveyance you choose. I have personally lost more skin, bled more blood, moaned louder and squeezed out more tears attempt­ing to load a bike, than I have in all the races I have ever ridden.

And that, as I am reminded constantly, goes back a long way.

The single most deadly thing you can load a bike into is a van. Consider: Once I was rolling a bike up a loading ramp into the back of a Ford Super Van. As the bike was heavy, it took a bit of speed to get it up the ramp. Just as the bike started its upward path, a gust of wind blew the left door partial­ly shut. My knuckles caught the lead­ing edge of the door and both the bike and I came to an immediate and painful halt.

However, the right side of the bike had a bit of momentum in it and swung lazily over. An instant later, I was on the ground with the bike on top of me, upside down. Gas dripped steadily over what used to be a good pair of pants. Naturally, I couldn’t move and no one was around. So, I just laid there for a while, hoping the pain would go away. It didn’t.

Another time: I had a bike on a trailer strapped in place with two tie-downs. After getting all of my riding gear together, I rocked the bike a bit to check it and made a last minute deci­sion to snug it down a bit more. For safety, you understand.

First, a tug on the right tie-down. Then, a good strong pull on the left one. Sprannnng! The ancient tie-down snapped and the bike absolutely lunged off the trailer and pounded me dead-center in the fore­head. As luck would have it, the end of the bar made the initial contact—and the bar had a thrashed grip on the end. For about a month after that incident, I walked around with a big circle stamped in the middle of my forehead. Folks must have thought that I was a member of some odd religious cult.

More? You want to hear more? Okay. I had two bikes in the back of that same cursed Ford van one day and it appeared that the lever on one bike might kink the throttle cable on the other. It was impossible to move either bike, as they were both snubbed down in place. So I leaned over the bars and released one tie-down.

Now, if I had done this in the mid-seventies, there would have been no problem to speak of, because back then all of the bikes had maybe seven inches of travel. Tops. But this was one of those 12½-inch Maicos. When the pressure was taken off those massive forks, the bike rose up sharply and pinned my head to the roof of the van. The bars were rammed across my throat and I was being strangled by my own 490 Maico!

To save my life, I had to turn my head sideways and drag my head out from between the bars and the roof. I left a trail of blood against the roof that is there as of this writing, as a mute testimony to the perils of transporting race bikes. My ears looked like liver for about two weeks.

Enough? No? Alright. How about this? Once I was pushing a shiny, new test bike up into the bed of the vomit-colored Toyota DB truck. Things went just fine, until I stepped on a number plate that was laying on the tailgate. Don’t ask me how it got there. Please. Anyway, the number plate shot off into the air like a frisbee, and my leg spasmed above my head like a ballet dancer with a bad case of the Mexican trots.

A portrait is necessary at this point, if you will. Picture a full-grown, two-hundred pound man holding onto a motorcycle with both hands. One leg, as stated, is high above the head and straight as an arrow—toes pointed. The other is tucked underneath like a flamingo of sorts. The entire body is horizontal and about five feet from the ground. The loading ramp has taken a walk off to one side and is sus­pended in the air. Only the front wheel of the bike is touching the tailgate. The bike is also leaned over, much like a road racer on the banking at Daytona. Freeze this picture into your mind for a moment. I refuse to relate what happened a fraction of a second later. Suffice to say that I walked with a pro­nounced limp for some time after the accident.

No more, no more! Well, one more; but this is the last. After having had my share of grief with that vile Ford Super Van, I started using a great deal more caution when loading the bikes. I welded a bolt on the end of the loading ramp and drilled a matching hole in the floor at the back of the van so the ramp wouldn’t slip anymore.

I had an extra section welded to the bottom of the ramp to guide the tires into the groove comfortably. No more slipping off this way. I bought a set of bungee cords to keep the doors of the van open and well out of the way while I was pushing the bikes up the ramp. I even went so far as to glue carpeting to the ramp itself, so the tires would grip, no matter what.

It was a warm, spring day. I had to take a new bike out to the Dunes for a test session. The loading ramp was slipped into place. The doors of the van were carefully hooked back out of the way. All of the area at the back of the van was checked for dangerous debris.

Everything clear? Good. I clutched the bars and started pumping the legs. Bike and pusher picked up speed. The front wheel hit the ramp cleanly and the bike headed up the center of the ramp, straight and true. I kept two fingers poised over the front brake lever to slow the bike down when it was needed. That moment never ar­rived.

Somehow, some way, I had for­gotten about the roof of the van. That cold, hard, unyielding roof caught me square in the forehead, putting a crease directly across the faint circular scar still there.

The bike had a great deal of momentum. So much so that, when my hands left the bars (involuntarily, I assure you), the bike hurtled all the way to the front and blasted a chunk out of the windshield and put the radio perma­nently at 94.7 on the dial. FM, for­tunately.

I refuse, absolutely refuse, to go into any more details. A man in my position deserves some respect! After all, danger is my business.