Suzuki has reason to be excited in 2015.

Although no official word has yet come down, the rumor is that the factory-backed Yoshimura Suzuki team has hired none other than newly crowned Lucas Oil 450cc Pro Motocross Champion Ken Roczen of Germany to campaign the 2015 Monster Energy AMA Supercross and Lucas Oil Pro motocross series. The timing couldn’t be better for Roczen or Suzuki, as the Hamamatsu firm has significantly updated its RM-Z450 for 2015, creating high expectations for next season.

Roczen’s pedigree is not in doubt, but can the new RM-Z450 deliver the goods to bring Suzuki its first AMA Championship in the premier class since Ryan Dungey’s sweep of both the supercross and motocross titles in 2010? After spending time aboard the RM-Z450, we’re confident that the basic ingredients are there. A clear effort has made to bring the Suzuki on par with the top dogs in the class.

Mechanical changes to the RM-Z450’s fuel-injected, DOHC, 449cc four-stroke single for 2015 are both minor and significant at the same time. Suzuki engineers have remapped the 450’s ignition and Keihin fuel injection, which utilizes a 44mm throttle body with a 12-hole fuel injector, to yield more low-end and mid-range grunt from its big bore/short-stroke (96.0 x 62.1mm) engine. They also redesigned the muffler to reduce its noise output. But the big news is that Suzuki is offering riders a greater degree of control to help the big RM-Z garner a lion’s share of holeshots. To that end, the RM-Z450 gets a new Suzuki Holeshot Assist Control (SHAC) system, which features two modes that alter ignition. In A Mode, the RM-Z retards the ignition to minimize wheel slip in hard-packed or slippery conditions, while B Mode offers more aggressive mapping for high-traction conditions. Once out of the gate, the SHAC returns the ignition timing to the stock mapping after 1.2 seconds or once the rider engages third gear. The system is engaged by a button on the left-side handlebar, and it can be completely disengaged if conditions warrant it.

The RM-Z450 is now easier to start than ever, thanks to a redesign of its kick-starting gears. Suzuki engineers attempted to improve the 450’s cranky starting habits with the 2014 model by reprogramming its Electronic Control Module (ECM) to retard the ignition and eliminate an unwanted extra spark that was being thrown out during the exhaust stroke. The spark was igniting unburned residual gases in the combustion chamber and made starting a dicey propostion—not a good thing if you’re quickly trying to get back in the race after stalling or crashing. The new ECM appeared to help, as we had no trouble getting the 2014 to start, but apparently that wasn’t good enough for Suzuki. For 2015, the RM-Z450 also gets a 30mm longer kickstart lever and a revised kickstart idler gear along with an updated de-compression system and a redesigned exhaust camshaft to make starting the bike even easier. Suzuki officials are so proud of these changes that they claim the 450 can now be started by hand even when hot, and we can report that even a half-hearted boot is enough to get the big motor roaring to life.

But what about the power? That’s a bit of a conundrum, as our expert test rider, Ryan Abbatoye, had no complaints about the 2014 RM-Z450’s delivery. However, while the RM-Z450 produces solid grunt, other 2015s we’ve sampled outshine the Suzuki off the bottom and into the midrange. The RM-Z is far from slow, and all but a Pro-level rider would have a hard time riding it to its potential, but Abbatoye is a Pro-level rider, and he said that some might still wish for more grunt, particularly down low. Similar to the power character of the RM-Z250, the 450 is linear and responsive everywhere, but it really likes to be kept in the middle of the powerband for maximum effect on the track. Abbatoye found that short-shifting its slick five-speed transmission is the key to success because the 450 engine tends to run through its rpm range and kiss the rev limiter rather quickly on the track. The RM-Z450 boasts easy-riding power, but more low-end torque and a broader pull would be a welcome improvement that wouldn’t necessarily upset the RM-Z’s overall flow. At the track, Abbatoye was happiest when he swapped to the RM-Z’s “fast” ECU coupler, which delivers a richer fuel setting throughout the rev range. Suzuki’s coupler system makes altering the RM-Z450’s powerband easy. A swap takes mere seconds to complete, and the modules can be reprogrammed using Suzuki’s accessory software.

To confirm our on-track impressions, we trucked our RM-Z450 to the dyno, where it produced 49.5 peak rear-wheel horsepower at 8750 rpm, with 31.53 lb.-ft. of torque at 8000 rpm. The Suzuki maintained 30 lb.-ft. of torque from 6500 rpm to 8500 rpm, proving that it is a midrange monster. The 450’s rev limiter steps into halt the proceedings at 11,000 rpm. The numbers show that the RM-Z is strong, but it isn’t the strongest 450 in the class. The torque figures also show that it is making its best power right where we thought it did.

The 2015 RM-Z450 should be able to maintain its peak power longer over the course of a moto because it runs cooler now. Suzuki claims that its coolant system is 16 percent more efficient because the coolant is now more effectively routed between the right and left radiator halves, and the RM-Z’s water-pump cover hose connection directs coolant directly into the water-pump.

And power isn’t everything, especially in an open-class motocross machine—just ask some of Suzuki’s competition. Sure, getting the holeshot can be a huge advantage, but if you have to wrestle your big-bore machine around the track like a sideshow performer at an alligator farm, your energy will be taxed more easily in a long moto. Handling is just as crucial to overall performance. Fortunately for Suzuki fans, the RM-Z450 carves like a precision pen writing cursive. Berms, sweepers, off-cambers, loam or hardpack, the Suzuki rails around corners like it is on a train track. Steering is light and exact, while the RM-Z’s twin-spar aluminum chassis retains rock-solid stability in fast chop.

The key to its handling prowess, says Suzuki, is a redesigned frame that reduces weight by 4 percent, with retuned flex points to make the bike more compliant over rough terrain. The 2014 model already handled amazingly well, but the 2015 handles even better. Our 2015 test bike tipped the scales at 248 lbs., with its 1.6-gallon aluminum fuel tank topped. The RM-Z450 places 119 lbs. of that weight on the front wheel and 129 lbs. on the rear wheel for a 48%/52% front/rear weight bias. It feels light and flickable on the ground or in the air.

“The new chassis has a lot more flex to it, which takes away some of the harshness to it,” Abbatoye noted. “Overall, it just feels like a huge improvement over the 2014.”

Of course, some of the new RM-Z’s handling improvement can also be attributed to its trick new 48mm Showa SFF-Air Fork, which replaces the previous Separate Function Fork. However, the Suzuki version differs from the Honda and Kawasaki versions by virtue of the fact that its third air chamber—a.k.a. balance chamber—is external, located at the bottom of the right fork leg. Suzuki tested its version of the SFF-Air on James Stewart’s factory Yoshimura Suzuki throughout the 2014 season before pronouncing it ready for production. Like the other brands that have made the switch, Suzuki claims a 2.5-lb. weight reduction as well as more incremental adjustability as the primary factors in going spring-less up front.

The SFF-Air fork is matched with a rising-rate rear suspension linkage and Showa Piggyback rear shock that features high- and low-speed compression damping adjustability as well as rebound damping and spring preload adjustability to control its 12.2 inches of travel.

Abbatoye noted that the fork, felt a little harsh initially and was riding too low, so we added pressure to the balance chamber. The change raised the ride height and also brought the fork into better sync with the rear end. After that, all it took was a slight increase to the rebound setting on the fork to make the big Suzuki perfectly compliant over the whole gamut of suspension loads, including small bumps, spike hits, g-outs and everything in-between. The Suzuki’s on-track behavior proved just how much easier it can be to dial-in the suspension with an air fork—that is, provided that you have the special air pump required to make the adjustments. Rather than throw one in at the point of sale, Suzuki requires that you buy its pump as an accessory. That’s not so cool, even if the suspension itself is. Abbatoye definitely liked the Suzuki fork.

“I like them, but I am an off-road guy, and for off-road you kind haven’t been able to trust them,” Abbatoye said. “Now, with the triple chamber, at least it seems like if you lost air pressure they wouldn’t collapse. Overall, it’s just a lot more composed than the 2014 bike. Suzukis have been known for good turn-in, but with the 2014, over the fast stuff it was kind of nervous, but with the new fork and revised shock valving it is really stable.”

Adding to rider confidence is a comfortable ergonomic package that makes it easy to maneuver the RM-Z450. Perched 37.6 inches off the ground, it is flat and slim. The RM-Z’s bars are also positioned well, allowing the rider to feel comfortable when seated or standing.

Abbatoye also noted that the RM-Z450’s front and rear wave-rotor disc brakes, measuring 250mm up front and 240mm out back, do an adequate job of hauling the RM-Z450 down from speed. In a time when other brands are stepping up to oversize front rotors, the Suzuki gives nothing away in the power or feel department, for the time being.

The bottom line is that even though it didn’t get a huge power boost for 2015, the RM-Z450 is still substantially better than the 2014 model. Its chassis feels better, its suspension works better, and it may just be the best handling 450cc motocross bike avaiaable. With an MSRP of $8749, it’s also a pretty decent bargain. That said, we won’t be surprised to see a lot of yellow-hued bikes circulating the nation’s motocross tracks next summer, nor will we be shocked if the factory team has earned another AMA Championship, or two, by the close of 2015. 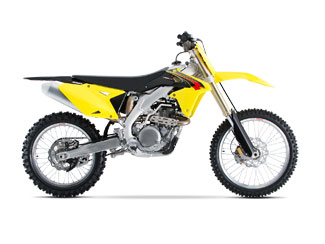