In what is almost certainly his last AMA National aboard an RCH Soaring Eagle/Jimmy John’s Suzuki RM-Z450, newly crowned 2016 Lucas Oil 450cc Pro Motocross Champion Ken Roczen gave his team a hell of a sendoff by scoring his ninth series win of the season at Ironman Raceway in Crawfordsville, Indiana, today.

The now two-time series champion put in a dominant performance that equaled the one with whic he clinched the title one round early, last weekend. Roczen stormed to 1-1 moto scores to end the year with 20 moto wins out of a possible 24 motos. In the 250cc class, Monster Energy/Pro Circuit/Kawasaki’s Austin Forkner enjoyed another milestone in his rookie season, landing his first career Lucas Oil Pro overall win.

450cc
On a rain-soaked and rutted Ironman racetrack, Roczen pulled the holeshot in the first 450cc moto, leading Autotrader/Monster Energy/Yamaha teammates Justin Barcia and Phil Nicoletti. Barcia was able to latch onto Roczen early, and the two put some distance between themselves and the field. Then Roczen stepped up the pace even more, and he began to build an insurmountable lead as the moto progressed.

With Barcia running second, Nicoletti and Red Bull KTM’s Marvin Musquin battled for third briefly before Musquin secure the position on lap two. Musquin held the spot for most of the moto until Monster Energy Kawasaki’s Eli Tomac caught him. Tomac was able to out-muscle Musquin to take over third place on lap seven. Tomac crashed two laps later, however, allowing Musquin to retake third place. Tomac remounted and fought his way past the Frenchman again by taking advantage of lapped traffic two laps before the finish.

Roczen crossed the line just over 6 seconds ahead of Barcia. Then came Tomac, Musquin and Rockstar Energy Husqvarna Factory Racing’s Jason Anderson, who was returning to racing after a long layoff due to injury. Anderson was mainly on hand to get in some track time as training for the upcoming Motocross of Nations in Maggiora, Italy.

In the last AMA National motocross of his 16-year career, BTO Sports/WPS/KTM’s Andrew Short went out on a high note by grabbing the holeshot to start Moto 2, just ahead of Barcia and Tomac. Barcia quickly overcame Short, the latter’s race ending prematurely when he suffered a shock failure. Roczen and Musquin stalked Barcia, and when Barcia made a minor mistake, Roczen quickly moved into the lead. Once again, Roczen disappeared from view, leaving Barcia in second an Musquin in third.

Tomac, meanwhile, ran sixth on the opening lap, but the Kawi man was on the move again, and he passed Musquin for third place on lap five. Musquin then settled into a duel with Anderson for fourth place. Musquin ultimately secure the spot.

Roczen went on to lead every lap and took the checkered flag 19.7 seconds ahead of Barcia. Tomac followed in third. Roczen’s 1-1 scores earned his 15th career 450cc class win, moving him into a tie with Jeremy McGrath for eighth on the all-time winner’s list. He also became the first multi-time winner at Ironman Raceway, having won the inaugural Ironman National in 2014.

“It ended up being a beautiful day today,” Roczen said. “It was a little sloppy in the morning but the track dried out all day. I got two awesome starts and just put in a good charge. I went for another win because we wanted to finish the season off strong and not slack off. It was really tough to stay motivated, but I knew we had another race this week. I ultimately knew I would come here mentally ready, and I couldn’t be happier to end the season this way and move on to the off-season feeling like we did everything we came here to do this summer.”

Barcia posted his single-best outing of the championship with 2-2 scores for second overall. Tomac’s 3-3 scores allowed him to claim the final podium position.

Roczen finished the season with 584 points, 86 more than series runner-up Tomac. It is the fourth-highest point total achieved in the premier division in Pro Motocross history and is the most since 2008 when James Stewart earned 600 points during an undefeated season. Musquin wrapped up third in the final standings, 183 points behind Roczen.

While the top three eventually settled into their positions, Webb was charging up from 13th place on the opening lap. He was up to fifth place by lap six and fourth place by lap nine. Webb then closed the gap to Martin in the late stages of the moto. Just as tried to take an inside line for the position, Webb’s bike took a hop while entering the corner, and Webb crashed again. He was back on the bike quickly and able to stay in fourth place, although he was forced to get rid of his mud-caked goggles.

Forkner cruised to his second career moto win by nearly 29 seconds over Savatgy. Martin was third. Monster Energy/Pro Circuit/Kawasaki’s Arnaud Tonus was able to take advantage of Webb’s lack of goggles to pass the champion for fourth on the final lap. Webb was fifth.

Forkner scored another holeshot in Moto 2, edging out Yamalube/Star Racing Yamaha’s Aaron Plessinger, though Plessinger’s momentum carried him into the lead, with Forkner second and Webb third. Monster Energy/Pro Circuit/Kawasaki’s Adam Cianciarulo ran third, ahead of Martin and Webb. Plessinger then bobbled on the opening lap, allowing Forkner to retake the lead. Webb moved into third, passing both Martin and Cianciarulo.

Forkner and Plessinger proceeded to pull away from their competitors, with Forkner securely in control despite Plessinger following just a few bike lengths back. As the leaders continued to pace one another, Star Racing teammates Webb and Martin suddenly found themselves in a battle for third after Webb crashed and lost all of the advantage he held over his teammate. Webb held Martin off and eventually pulled away again.

Out front, Plessinger fought his way back to Forkner and began to pressure the rookie for the lead. Forkner effectively handed the spot to Plessinger by crashing just after the finish line on lap eight, but Forkner was able to get back underway in second place. However, Webb was right on him, and Forkner yielded to the champion on lap 10. Forkner then began checking his back to see if anyone else might be up to challenge him for third place, knowing that finishing third would be good enough to secure the overall win.

Plessinger led the remainder of the race to earn his first moto win of the season at the track in which he broke through for his first career overall victory in 2015. He crossed the line 12.7 seconds ahead of Webb. Forkner settled for third, but that was good enough for this first career overall win as a professional. It was also the third time this season that a rider has scored the first overall win of his career.

“In the first moto I told myself not to look back because then I start thinking too much,” Forkner said. “I didn’t [look back] until late and figured there’s got to be someone behind me, but I was surprised to see I was up 23 seconds according to my mechanic. From there I just put it in cruise control and focused on hitting my lines.

“In the second moto I got a good start but Aaron [Plessinger] got by me,” Forkner added. “I just tried to follow him and he messed up, so I got by. He got close to me so I knew I had to try and get some breathing room, and I ended up going down. I had to ride the rest of the moto basically with one eye because I got some sweat on the inside of my goggles. Cooper [Webb] ended up getting by me and I didn’t really put up a fight. I just put it in cruise control because I was pretty sure I got it [the overall].”

Yamalube/Star Racing/Yamaha wound up in a three-way tie for second, with Plessinger’s moto win ultimately landing him in the runner-up spot (8-1) followed by Webb in third (5-2). Martin’s fourth-place finish in the final moto left him off the podium in fourth (3-4). 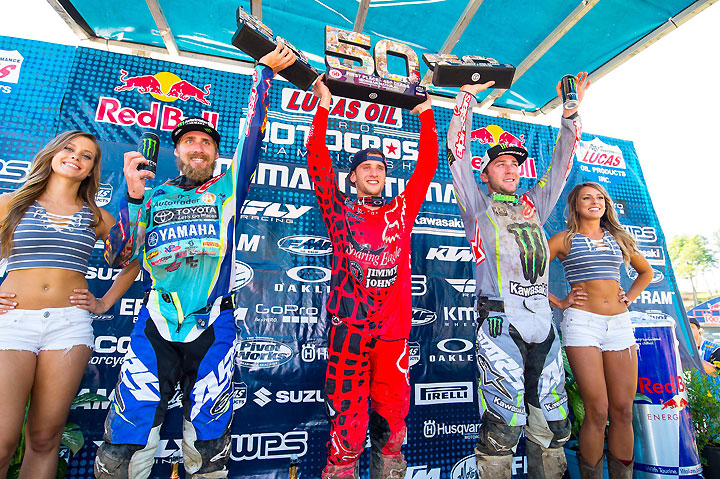 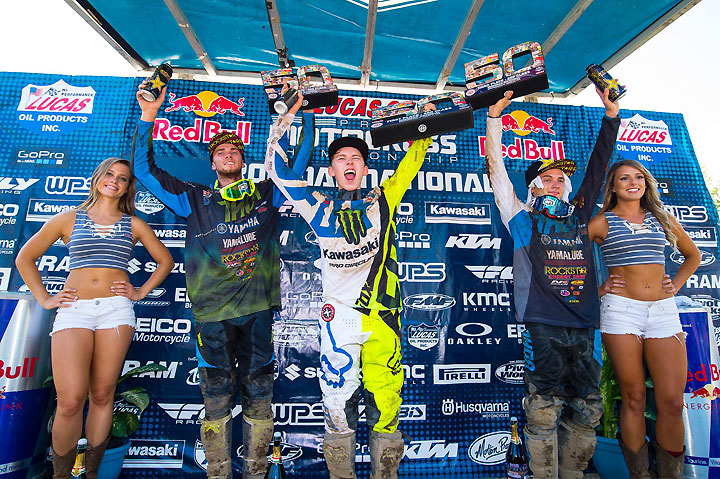