The 22-year-old German rider posted his 10th career 450cc win and his fourth overall win in five rounds of the series, piloting his RCH Soaring Eagle/Jimmy John’s/Suzuki Factory Racing RM-Z450 to 1-1 moto scores, adding to an already commanding series points lead in the 450cc class. Thus far in the 2016 season, Roczen has only lost one out of the 10 motos run.

Roczen didn’t have the easiest time of it in the first 450cc moto. He ran fifth early, behind Team Honda HRC’s Cole Seely, Autotrader/Monster Energy/Yamaha’s Phil Nicoletti and the weekend’s fast qualifier, Rockstar Energy Husqvarna Factory Racing’s Christophe Pourcel. Autotrader/Monster Energy/Yamaha’s Justin Barcia ran fourth. Up front, Seely had trouble establishing a fast pace and Nicoletti passed him just a few turns into the moto. Pourcel and Barcia also advanced on Seely before he was able to find his rhythm and pass his way back into the lead before lap one was in the books.

While the top four running order shuffled, Roczen and Monster Energy Kawasaki’s Eli Tomac followed in fifth and sixth respectively. Roczen made his way past Barcia, Pourcel and Nicoletti to move into second place on lap three, but by then Seely had put about 8 seconds on the field. Tomac, meanwhile, moved into third place only after a little help as teammates Nicoletti and Barcia tangled and crashed while battling for third.

With Tomac right behind Roczen, the two riders caught up to Seely, setting up a frantic battle for several laps, with Tomac actually snatching second away from Roczen. Tomac couldn’t find a way past Seely, Roczen, but Roczen slipped past both of them by lap nine to take the lead, and he went on to win the moto by 6 seconds. Tomac, Seely, Pourcel and Autotrader/Monster Energy/Yamaha’s Weston Peick completed the top five.

However, Roczen was a surgeon as he passed his way into third place and began to hound Brayton. Roczen got by Brayton and then Tickle before the end of lap one. Tomac had followed Roczen through the riders in front to make his way into second place by lap three, and from there the front two ran nearly identical lap times, which allowed Roczen to maintain a cushion of several seconds for most of the race. However, Tomac pushed hard late in the moto to challenge Roczen for the moto and overall wins. Despite showing the German a wheel several times in the last few laps, Tomac came up short by just a few bike lengths. Tickle held strong for third place throughout the moto, carding his best moto finish of the season, and his 6-3 scores also landed him his first podium finish since 2012.

Roczen is now 47 points ahead of Tomac in the Lucas Oil 450cc Pro Motocross Championship points race. Seely, who finished fourth overall at Muddy Creek, jumped to third, 92 points out of the lead.

“That [second moto win] felt good. That’s the way you want to win a race,” Roczen said. “[Tomac] was pushing during the final laps but I was able to hold him off. This was one of the hotter races [this season], which made it tougher. I’m just going to keep doing what I’m doing [in training] because it seems to be working. We were able to get another win today and go 1-1, so we’ll just keep working.”

Tomac’s second overall finish was his best of the season.

“We [Roczen and I] were just nailing our lines and clicking off laps out there,” Tomac said. “He got a little out of touch [in the middle of the moto] but we were able to close in. He was just riding awesome and kept me behind him. It’s good. We’ll take this and move on to fight another day. I really just want to beat him across the line next weekend.”

The Lucas Oil Pro Motocross Championship will reach the halfway point of the 2016 season next weekend with the RedBud National in Buchanan, Michigan. The sixth round of the championship will commence over Independence Day weekend on Saturday, July 2. 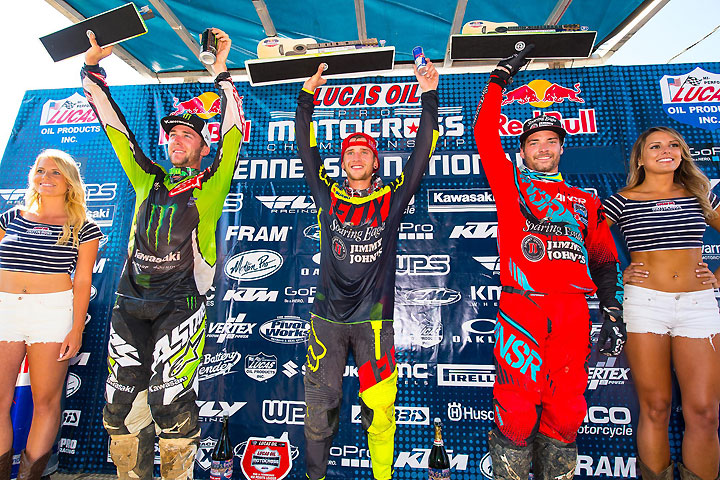