The following is from MX Sports Pro Racing, organizers of the Lucas Oil Pro Motocross Championship:

NEW BERLIN, N.Y. (August 13, 2016)– The Lucas Oil Pro Motocross Championship, sanctioned by AMA Pro Racing, returned to action in the northeast following a two-week break for Round 10 of the 2016 season at Unadilla MX and the Unadilla National. RCH Soaring Eagle/Jimmy John’s/Suzuki Factory Racing’s Ken Roczen dominated the field by sweeping both motos en route to his seventh 450 Class victory of the season. In the 250 Class championship leader Cooper Webb inched closer to capturing his first-ever national title by piloting his Yamalube/Star Racing Yamaha to his fourth win following a sweep of both motos.

The opening 450 Class moto witnessed Autotrader/Monster Energy/Yamaha rider and New York native Justin Barcia rocket out of the starting line to grab the holeshot in front of the hometown crowd ahead of Roczen and Monster Energy Kawasaki’s Eli Tomac. Despite the stiff competition, Roczen rode exceptionally in the early stages and quickly found his way past both Tomac and Barcia to take control of the lead on the opening lap. Tomac was determined to keep the German rider in his sights and moved into second, leaving Barcia third ahead of Red Bull KTM’s Marvin Musquin.

With a clear track ahead Roczen sprinted out ahead of the pack, using every inch of the track to find fast lines and quickly distance himself from the field. Tomac comfortably held onto second, while Barcia came under pressure from Musquin in the battle for third. The Frenchman meticulously navigated the rutted circuit and made an aggressive move to overtake Barcia for third on Lap 4.

Despite facing some of the most challenging conditions of the year, consisting of an extremely rough and technical track due rain earlier in the week, in addition to high heat and humidity, Roczen remained unfazed by steadily extending his lead lap after lap. The German would go on to win his 15th moto of the season ahead of Tomac, who finished a distanced second. Musquin charged hard to the finish for third, followed by the JRMX duo of Barcia and Weston Peick in fourth and fifth, respectively.

As the field roared off through the first turn for 450 Class Moto 2, Roczen earned the holeshot by edging out Musquin and his Red Bull KTM teammate Dean Wilson. The difficult conditions resulted in several riders shuffling positions on the opening lap, but Roczen dropped the hammer in order to give himself breathing room. With Musquin in control of second, Autotrader/Monster Energy/Yamaha’s Phil Nicoletti found his way past Wilson for third. Tomac was forced to work his way forward from deep in the field, eventually completing the opening lap in ninth.

With Roczen easily controlling the tempo at the front, the battle for the final podium positions was in full effect with Bloss on a charge to the front, overtaking both Wilson and Nicoletti. As this was unfolding, Musquin suffered misfortune while running second, dropping him to seventh and moving Bloss up to second, just ahead of Nicoletti. Musquin put his head down and began picking riders off at will, eventually re-passing the group ahead of him to regain control of second on Lap 7. After beginning the race just inside the top 10, Tomac had made good work of picking his way through the field and passed Bloss for third just turns later.

Roczen once again opened up an insurmountable lead over his fellow competitors to easily take the moto win for the 16th time this season, followed by a strong showing from Musquin in second with Tomac rounding out the podium in third. Musquin grabbed his third straight overall podium finish in second.

Roczen’s swept both motos for the seventh time this season, giving him seven wins and further extending his championship lead. Musquin (3-2) edged out Tomac (2-3) in the tiebreaker for second overall for his third straight podium effort.

“We had a great day today. The bike was great in these rough conditions and it was a huge help to be able to get into the lead early and ride my own race,” said Roczen. “It feels good to get another 1-1 and get back on top of the podium. We’ll go out next week looking to do the same thing.”

With two rounds remaining, Roczen has put himself in a position to clinch his second 450 Class title next weekend, currently holding a 63-point lead over Tomac. He’ll need to finish next weekend’s race with a minimum 50-point lead in order to secure the title. Musquin remains in control of third (-159).

In the 250 Class, the Monster Energy/Pro Circuit/Kawasaki trio of Austin Forkner, Joey Savatgy and Adam Cianciarulo led the 40-rider field into the first turn of the opening moto. However, a crash on the opening lap brought out the red flag, resulting in a restart to the moto. As the field launched out of the gate on the restart, it was once again a Pro Circuit Kawasaki rider with the holeshot as Cianciarulo grabbed the early lead just ahead of Webb and fellow Monster Energy/Pro Circuit/Kawasaki teammates Arnaud Tonus and Joey Savatgy. Forkner, who led prior to the restart, was an unfortunate victim of an opening-lap incident and began the opening lap outside of the top-20.

Cianciarulo was able to quickly distance himself from Webb and opened a small gap in the opening laps, while Kawasaki teammates Tonus and Savatgy dodged each other’s roost as they set after the front-runners. Like he’s done several times this season, Webb started to turn up the heat near the halfway point of the 30-minute plus two-lap moto and slowly began inching onto the rear fender of Cianciarulo. On Lap 6, Webb dove to the inside of Cianciarulo to make the pass stick and seize control of the lead. Meanwhile the fight for third continued just behind them as Savatgy moved into third, shuffling Tonus back to fourth.

With a blistering pace at the front of the field, Webb immediately pulled away from the freight train behind him. When the checkered flag waved, Webb’s late dominance helped him claim his seventh moto win of the season by more than eighth seconds over Savatgy, who continued his forward push into second. An incredibly hard-fought ride saw Yamalube/Star Racing Yamaha’s Aaron Plessinger grab third after starting 16th for his third moto podium of the season. Early leader Cianciarulo held on to earn his best moto finish of the season in fourth, while Troy Lee Designs/Red Bull/KTM’s Justin Hill completed the top five.

The second 250 Class moto got underway with Monster Energy/Pro Circuit/Kawasaki sweeping both holeshots on the day, this time with Forkner leading the field through the first turn, followed closely by his teammate Savatgy and the Yamalube/Star Racing Yamaha trio of Webb, Alex Martin and Plessinger. The rookie set a quick pace on the opening lap and opened up a comfortable lead over Webb and the field.

One round after taking his first career moto win, Forkner controlled the lead like a seasoned pro, nailing every turn and line aboard his Kawasaki. Webb remained solidly in second, but Plessinger started finding his groove battled his way into fourth on Lap 2. Savatgy, who started the race in second, suddenly dropped off of the pace and lost several positions before eventually retiring from the race early on Lap 6. Alex Martin ran third for the early portion of the moto, but Plessinger began to chip away at the gap, eventually finding his way around on Lap 6, while Hill followed into fourth, dropping Martin back to fifth.

Just like in Moto 1, Webb waited until late in Moto 2 to pick up the pace and start closing in on the race lead. Forkner soon had the Yamaha rider hot on his heels and began to feel the pressure, eventually giving up the race lead on Lap 9. Shortly after Webb took over the lead a crash resulted in a downed rider that eventually brought out the red flag once again. Due to the amount of the race that had been completed by that point, the red flag resulted in the conclusion of the moto. Webb was declared the winner, followed by Forkner and Plessinger.

Webb’s 1-1 effort easily landed him atop the overall classification for the fourth time this season, while Plessinger’s consistent moto scores (3-3) landed him the runner-up position. Forkner’s strong second moto helped him earn a second straight overall podium result in third (7-2).

“The restart definitely helped me in the first moto, but [Adam Cianciarulo] was riding awesome and I just hit my marks and slowly the race came to me. I was able to lay down some fast laps in the middle of the moto, which helped me make the pass and save energy towards the end,” said Webb. “It was kind of a repeat in Moto 2. [Austin Forkner] got out front and opened a gap early, but my fitness is good right now and I began clicking off laps near the halfway point. Once I got into the lead I was feeling great and even thought I held onto the win, I was a little bit disappointed that the race got called early [with the red flag].”

Webb’s victory helped him pull away even more in the 250 Class standings over Savatgy, who finished 10th overall (2-32) and Alex Martin, who finished seventh (13-5). Webb now holds an 81-point advantage over his closest championship contenders with two rounds remaining. He’ll enter next weekend with a chance to clinch his inaugural Pro Motocross title, needing to complete the race with a minimum 50-point lead.

The Lucas Oil Pro Motocross Championship will continue next weekend for the penultimate round of the 2016 season with the GEICO Motorcycle Budds Creek National on Saturday, August 20, from Budds Creek Motocross Park in Mechanicsville, Maryland. 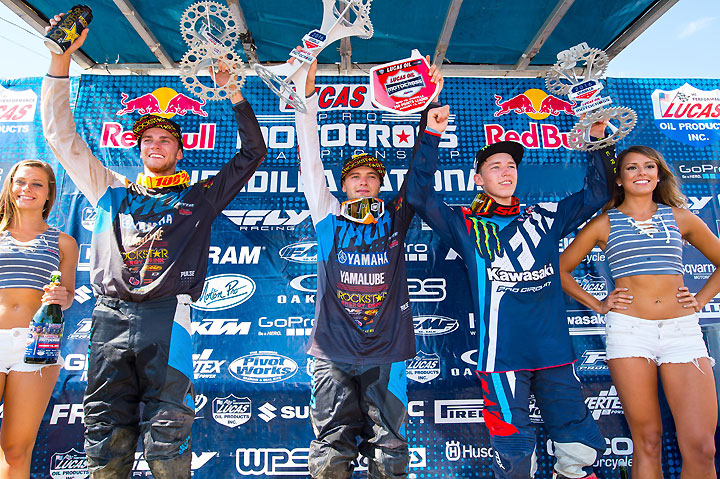