For some reason, the Barstow to Vegas always proved to be a real ball-breaker for me. Something always seemed to happen. Usually, dead center in the middle of nowhere. Follow along.–Rick Sieman. 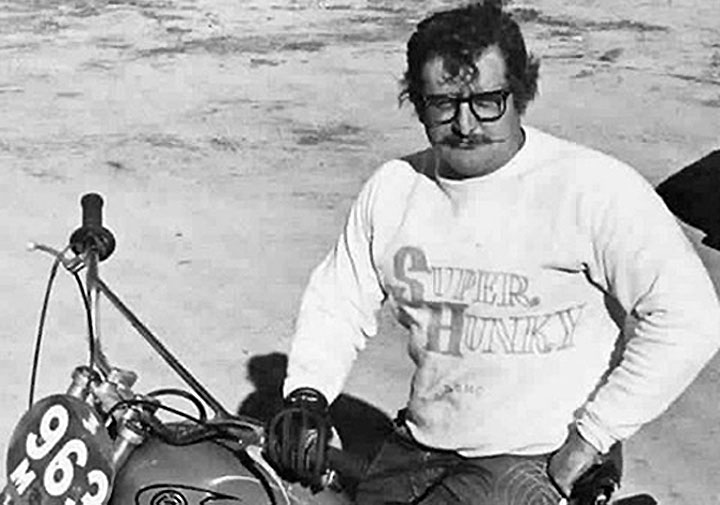 “How come all these tools,” asked Chet. “Are you gonna open up a machine shop in the middle of the desert?”

“Never mind,” I patiently answered, “you can never tell when they’re going to come in handy.”

You see, we were out in the ga­rage preparing for the Barstow to Vegas Race, the one race in the world that caused me more grief than any plague of your choice. It took me four tries before I finally finished one of the damned things–and the one I did finish was no great shakes. Limping the last 60 miles or so with a severely forniscued and flat rear wheel is not exactly chuckles and grins.

Let’s see… my first Barstow to Vegas attempt had ended with a boulder two feet smaller than Alabama trying to occupy the very same space my front wheel was in. The wheel lost.

The second year, though, was a little better; I made it almost to the third gas before the entire exhaust system got ripped off the Greeves I was straddling. Greeves’, like most motorcycles, don’t take too kindly to having wide open ports sucking up the sand. So, I would ride about 50 yards, wire the pipes back in place, ride another 50 yards, do it again, and so forth. Until I arrived so late at the third gas check, the sponsoring club would not let me continue. “We don’t want you out in that desert in the stone dark, bwah.”

Foiled. If I had just had the foresight to have the right fix-em­-up equipment with me, I could have patched the Greeves and con­tinued onward to that elusive finish line.

Such was not the case. Other than one plug tool and a 20-pound crescent wrench, I carried only luck at my side. And all of it of low quality.

Why such a large crescent wrench? Simple. I was from Back East, and relatively new to the desert. Naturally, everyone filled my head with tales of being stranded in the middle of nowhere and being attacked by wild critters and such.

Thus, the wrench served a twofold purpose: maintenance and protection. What fool of a coyote is going to attack a man wielding a 20-pound crescent wrench nearly two feet long?

After the Greeve-ious experi­ence, I took to carrying greater quantities and selections of tools and emergency apparati.

The next year, I rode a 501 Maico in that cursed Barstow to Vegas and had plenty of tools along. Alas. Due to several messy endoes and misplaced gas crews, I never made the cutoff times past the California-Nevada state line. Nevertheless, I had ridden secure in the knowledge that I was able to repair the bike after the spills.

Vowing to finish Barstow to Vegas the next year, I rode a 250 Cooper and–lo and behold–I finished. But, as previously mentioned, in a sorry state of a ruined rear wheel and tire. With some foresight, I thought bitterly, I could have carried a spare tube and tire fixing tools. But no. I had to ride that last nasty section on mostly rim, all because of lack of foresight.

My 1973 Barstow to Vegas attempt was not to be so. Weeks before the race, I started prepping the Honda CR250 Elsinore that was to be my mount. It was a reliable bike. I knew that from four months of steady never-miss-a-beat riding. But the most painstaking of prepa­rations were taken nonetheless.

Most of the motorcycle was dis­mantled, and all critical parts were inspected. Good. Back together carefully. Now, a hefty skid plate got bolted in place, a Preston Petty toolbox/number plate was stuck on the front, and a pile of bare essentials were laid on the floor.

It took no more than four days to get all of this stuff secured in place. The Preston Petty toolbox/number plate looked like a large white bowling ball, it was so full. Whatever. I was ready for almost anything Barstow to Vegas could throw at me. Whoops. Better tape a tow rope on the cross bar. Just in case.

Just in case. Sure.

As it turned out, the only thing I really needed out of all that crap was the tow rope.

How? Why? How could such a finely prepared machine meet a dire fate?

It happened on the huge lake bed about 55 miles out of Barstow. This was not your ordinary everyday lake bed. Nossirree. This little sucker was about 15 miles long and almost that wide. You sort of drop down out of the mountains and wham­mo, there it is.

From a distance, it looks as smooth as the proverbial baby’s cheeks, but when you get right up on it, it has a crusty layer of something on the top. Guess it comes from the water drying up from underneath and wrinkling the surface. And there was some water still there this year. Rain had fallen a few days before, and mud streaked the lake bed here and there.

It must have come as a shock to some of the riders to descend the dusty mountain only to sink in black, oozing mud a minute or two later. Bizarre!

Most of the riders saw the mud in time and just gassed it hard enough to blast right over it; the unlucky ones didn’t and sank quietly down until the specific gravity of their particular motorcycle was met and matched.

I was lucky enough to see the mud, and passed through it with no sweat. Moments later, the lake bed got flat and smooth enough to allow liberal use of fifth gear. Hoo hah! Get down on the tank like the flattrackers.

I knew from previous experience that it was virtually impossible to hurt the Honda engine. Hell, we had put one on the dyno and run it at full throttle/full load for almost an hour. Not even a whim­per. Just keep it to the stops and listen to that motor scream:

All of a sudden, the piston ceased going up and down. For all practical purposes, the motor became one solid piece. This meant several things to the passenger–me–at that moment.

The silence from the once-howling exhaust told me that something was wrong. With lightning-like reflexes, I did absolutely nothing except listen to the sound of my jaw thwack against the tank. Then the rear wheel started to drift off the centerline.

My Bultaco-trained left hand fanned the clutch lever–too late–and the bike lurched to the opposite full lock. Despite many highly original body contor­tions, I was unable to bring the bike back to its intended primary direction of flight. Lord knows, I tried. I screamed, yelled, cursed, wrestled and yanked, but to no avail.

Suddenly–far too suddenly–there was silence. No noise at all, other than the sound of wind rushing past my full coverage helmet. I would need that in a moment or so.

As my completely petrified body lazily turned a few Immel­mans, I thought of all that I had been taught in the last few years. Relax … relax … relax … and let your body ease back to Ma Earth.

But in the back Of my mind, a little voice kept saying over and over, you stupid bastard, you just got off in a fifth gear highiside and are going to end up in China via a self-dug tunnel.

How, indeed, does one relax when one knows that eventually one will make contact, and not with the spirit world, either. With the real world.

Strangely though, the actual impact was very smooth. I never felt any sort of a jolt when my back touched the soft lake bed. I guess the speed was high enough to allow a flat trajectory and a very gradual lowering of the unintended flight pattern.

Hey, this wasn’t so bad, I thought; just lie back and take it easy until the skidding stops. After all, I had on a Full Bore Jacket, which gave me first-rate protection against abrasion, and the soft surface had no rocks or brush in it. Hell, what could happen?

The bike could happen, that’s what. Out of the left corner of my right eye, I could see the Honda flipping through the air like a demented Frisbee. Faaar out, I thought; that’s the first time I’ve ever seen the bottom of a 250 Elsinore. Sure is ugly. The bike must have sensed my immediate thoughts and headed right for me.

For protection, I rolled up into a little ball … as little of a ball as you can make out of 200 pounds of terrified meat–which proved to be a mistake. You see, I was still skidding, but rolling up into a ball made me react like one. The bike joined the rolling match, and we hit the scenic lake bed.

Finally, silence… I extracted the Honda from the inseam of my shorts and took a careful look at the damage. Bent bars. Bent rider. Nothing that wouldn’t cure on the rider, but the bike appeared close to terminal. After catching the perfunctory breath and letting the old heart slow down to 200 beats or so a minute, I stood the Honda up and took a close look. Whatinnahell could have caused the motor to stick? Or was it something in the gearbox? Lookasee.

I got the plug tool out of the toolbox thing and inserted it over the very cold plug that had been freshly installed the day before I left for Barstow; this would tell the story.

Whup! One turn on the plug tool and the plug fell out of its threaded hole. Ka-link against the side of the fins. Well, I’ll be go to hell! The spark plug backed off and let air in, which let the motor stick, which let me get off. In the middle of nowhere.

Exactly in the middle of no­where.

I stood up and looked around. There was nothing. Noth­ing at all. Not a rock. Not a bug. Not a stick. Not a bush. Nothing. Truly, I was in the middle of the legendary Nowhere. And all the tools in the world weren’t going to help me now. Hellsfire, I would have to carry spare parts for the engine to prevent situations like this from happening in the future.

I sat out on the lake bed a very long time before I managed to wangle a tow from someone. And while I sat there, I had plenty of time to think. What else do you do in the middle of nowhere?

You know what? With a bit of tape and some bungee cords, a fella could probably carry a piston in the air box, and maybe a set of rings taped to the top of his helmet, and a con rod could be taped to one of the swingarm tubes, and it would be no trouble at all to put some extra…

Just wait till next year!