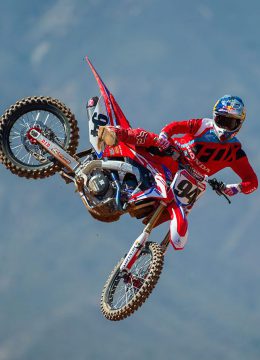 Are we poking fun? A little, but only because the “word on the streets” about the Roczen-Honda deal has been out there for so long that it no longer even deserved rumor status. Even with the coming and going of the Monster Energy MXGP of USA at Glen Helen Raceway two weeks ago, we expected Honda to finally come clean and officially announce that Roczen would Ride Red. It would have been perfect timing with the debut of the factory Honda CRF450RW on American soil.

DirtBikes.com even pestered Team Honda HRC’s Dan Betley at the GP about when the announcement of the team’s “second rider” might come. Naturally, he was tight-lipped. Although, generally speaking, he told us about Honda’s desire to make sure that the riders it signs to its team are completely free and clear of their obligations to whatever team they are coming from as a matter of courtesy. In other words, announcing Roczen’s move to Honda early would, to some extent, detract from Suzuki’s celebration of Roczen’s 450cc AMA outdoor title; best to leave a little time for the ad folks to get some victory ink out there. 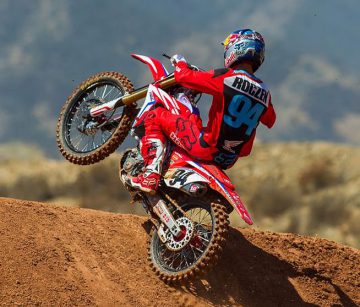 Betley also told us that there are times when contract negotiations take longer than anticipated, although he did not specifically say whether that was the case with Roczen because, again, at the time we spoke to him he would not confirm or deny that the Roczen deal was happening. We now know what we always knew, that it was, although the official word is that it is a three-year deal for an undisclosed amount and not the rumored five-year that was also rumored to be worth $7 million.

At any rate, here is the official press release issued by Honda this morning:

Roczen already has a long list of accomplishments to his name, including the 2014 and 2016 AMA Pro Motocross 450MX Championships and nine premier-class AMA Supercross victories. Aboard 250cc equipment, he earned the 2013 250SX West title, and prior to coming to the U.S. to race full-time, he won the 2011 MX2 World Championship. Roczen is confident in his ability to build on that success, and he has Honda’s full support and commitment.

“I’m really excited to be a part of Team Honda HRC,” Roczen said. “I’m always looking to improve myself, as well as my surroundings, team and equipment, which is why I decided to make a switch. I want to have the upper hand on every other rider out there, and I think I have that with Honda. Things are still new, but I’m feeling amazing and blown away by the bike and the atmosphere of the team. I think that when any rider makes a switch to a new team, he doesn’t fully know what to expect, so having such a smooth transition so far has been great. Big changes like this are great opportunities to make a statement, and I think doing an awesome video to announce something so special and big is really unique, especially to our industry. I’m excited that Honda was on board with the idea. Other sports do things like this, but it’s kind of a first for someone in the motocross industry. Most of the inspiration came from my buddy Ken Block, who always puts out killer videos. I talked to Honda about it and they were super stoked. Everyone worked hard to get it done, and the finished product is great.”

“I’m extremely happy to have a rider of Ken’s abilities and accomplishments become a part of our program, and I’m glad we can finally officially share this announcement with our fans. Ken has proven time and again that he has what it takes to consistently win races and run up front, and I’m confident in his ability to continue doing that aboard the new CRF450R. Together with his teammate Cole Seely, we have what I consider to be one of the strongest two-rider teams heading into 2017.”