Josh Strang wins his first GNCC of the season at the Unadilla Valley Sports Complex, but the injured Kailub Russell toughs it out and takes the title.

Strang got off to the right start in the race when he pulled the holeshot in the XC1 class, but AirGroup/Rockstar Energy/Husqvarna’s Ryan Sipes kept Strang close while staving off a challenge by Rocky Mountain ATV/MC KR4/FAR’s Thad Duvall, who moved up to make it a three-rider battle for the lead on the second lap. Sipes was able to maintain the lead to the finish to claim the victory.

“I’ve never won at this track, and it was good to get my first win here,” Strang said. “The track is rough and fast, but it can get frustrating with the lapped riders. Of course that’s all part of GNCC Racing, and having the high rider turnout is good for our sport.”

“Anytime I get to race I have fun, but especially today,” Duvall said. “Ryan and I have become pretty good friends the last few weeks during our time in Slovakia [at the 90th International Six Days Enduro], and racing against someone that I knew I could trust was just awesome.”

Although Russell suffered a torn ACL at the ISDE, he came to Unadilla anyway, knowing that he only needed fifth place or better to land the title. In a gritty performance, Russell managed to fourth and clinch the title with three rounds remaining.

“I wasn’t sure how I was going to feel on the bike, because anything can happen to make my injury worse,” Russell said. “It took me about an hour and half to feel like I had warmed up and get my momentum going.”

Rockstar Energy Husqvarna Factory Racing;s Andrew Delong rode a consistent race finished fifth overall, ahead of JCR Honda’s Chris Bach, who finished disappointing sixth after running in fourth for most of the race. N-Fab AmPro Yamaha’s Grant Baylor rode to a seventh-place finish in XC1 and ninth overall for the day, followed by Canada’s Tyler Medaglia.

Rocky Mountain ATV/MC KR4/FAR’s Nick Davis, who represented Team USA on the Junior World Trophy team at the ISDE, grabbed the XC2 holeshot and tried to get away from DirtWise/Maxxis/KLIM’s Jason Thomas, but Thomas was able to run down Davis and take the class lead. Davis’ suffered a miscue that cost him two more positions, but he quickly found his rhythm again and was able to move back into the class lead. Thomas was forced to pull off a last-lap charge, but he was able to pass Davis again and take the win.
“I didn’t really take a summer break, because I’ve been busy racing local races and training,” Thomas said. “The lappers didn’t affect me today because the local series I’ve been racing has a lot of riders and a short loop, which is very similar to here at Unadilla.”

After being slowed early in the race when barbed wire wrapped up in his rear wheel, E & H Honda’s Trevor Bollinger put on an impressive charge to work his way up from 20th on the first lap to finish in third place.

The AMSOIL GNCC tour makes its next stop in Central City, Pennsylvania, October 3-4 for the Car-Mate Mountain Ridge GNCC. 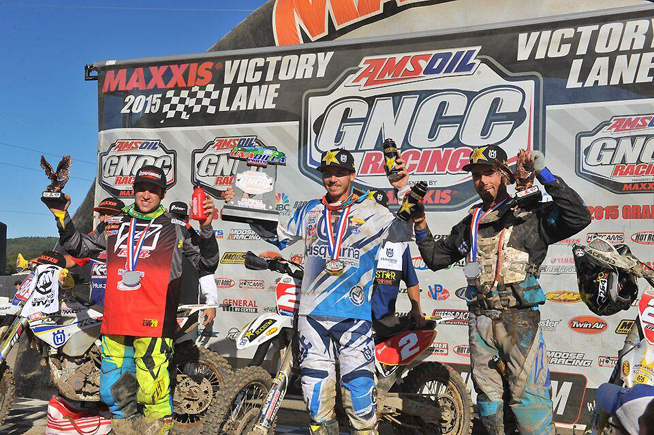