DirtBikes.com test rider Nic Garvin and I were almost finished with Honda’s presentation of its all-new CRF450R—or so we thought.

That’s when Honda Marketing Manager Lee Edmunds pulled a fast one on the largely unsuspecting U.S. press at Honda’s museum in Torrance, California. “Before we let you go, we just have one more thing we wanted to show you,” Edmunds said. At which point the thunder of a high-performance four-stroke could be heard emanating from the other room, and onto the main museum floor rode none other than Baja racing icon Johnny Campbell on another new Honda motorcycle, the 2017 CRF450RX.

It was worth it just to watch Garvin’s face light up like a kid at Christmas time. Seeing one of his heroes cruise in on an all-new Honda off-road racer put a smile on our junior test rider’s face that probably still hasn’t been wiped away some 13 hours later.

As one might expect, the 2017 CRF450RX is all-new, based directly on the 2017 Honda CRF450R motocross machine for which he had come to see unveiled. Much like the 2016 Yamaha YZ250X, we didn’t see the RX coming, but it makes perfect sense as Honda is keenly interested in GNCC racing these days.

The CRF450RX is basically a CRF450R dialed-in from the factory for off-road use. It features the same new Unicam SOHC engine and internal specs as the CRF450R, producing a claimed 60 horsepower at the crankshaft, an identical, all-new chassis and a new suspension that features a 49mm Showa coil spring fork and revised Pro-Link rear suspension with off-road settings. An electric starter and a larger, 2.2-gallon fuel tank are standard (the tank material is plastic as opposed to the CRF450R’s titanium) and an 18-inch rear wheel. Dunlop’s excellent AT81 off-road tires are mounted front and rear instead of the CRF450R’s Dunlop MX-3S tires.

However, one thing that we’re glad the new Honda CRF450RX doesn’t do is replace the Honda CRF450X in the company’s off-road lineup. The carbureted, EPA-legal 450X remains in basically the same trim it has enjoyed for the past few years, catering to everyone from casual trail riders to racers with Baja ambitions, giving Honda fans two choices in hard-core off-road motorcycles. 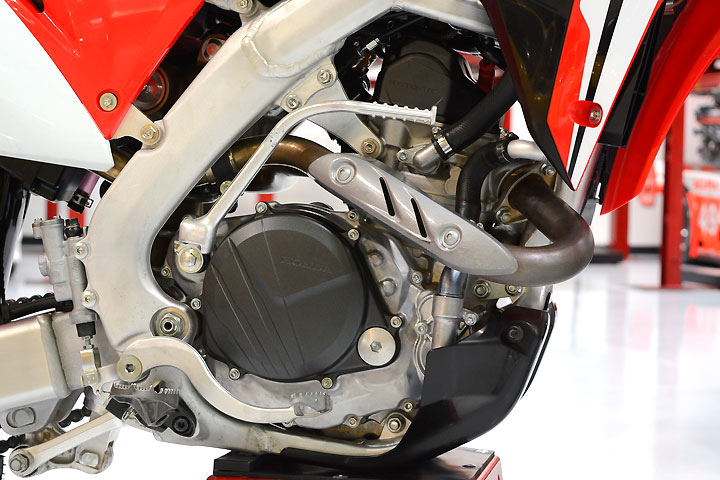 The RX gets the R’s all-new SOHC cylinder head and valve train that features a 2mm narrower valve angle and finger followers between the intake lobes and the intake valve stems along with a single forked rocker arm with a DLC (Diamond-like carbon) coating to open the exhaust valves. The RX’s camshaft specs are also identical to the motocross bike’s with .5mm more lift (now 10mm lift) on the intake lobes and .85mm more lift (8.8mm lift) on the exhaust lobe than the 2016 CRF450R’s cam. It also gets the larger intake valves and oval cross section valve springs.

To make the engine breathe as efficiently as possible, the CRF450RX’s intake tract is mounted high in the chassis, using a new airbox to create a downdraft intake layout that sends air on the straightest possible route to the RX’s 46mm Keihin PGM-FI throttle body. The incoming charge is routed to a new combustion chamber and is compressed by a new piston with a compression ratio of 13.5:1. Too keep the piston cool, an oil jet with a four-hole piston sprays oil on the underside of the piston to help keep engine temperatures in check. The CRF450RX also makes use of a new oiling system with a new dual-stage scavenge pump that is claimed to reduce pumping losses. Oil volume is just 1250cc to help reduce weight inside the engine.

The CRF450RX gets the same cable-operated clutch as the CRF450R. It uses one less disc and one less plate than the 2016 CRF450R. The new plates are thicker, but the overall clutch width is reduced when compared to the 2016 CRF450R’s clutch. The primary ratio 28/66. The CRF450RX’s transmission ratios are identical the CRF450R’s, but the RX gets a one-tooth larger, 50-tooth rear sprocket.

Honda pioneered the aluminum twin spar frame on production dirt bikes, and the CRF450RX’s is all new, with revised geometry and swaged spars that are claimed to reduce torsional stiffness by 6.8 percent while retaining the lateral stiffness of the previous-generation CRF450R chassis. The RX’s aluminum subframe features a patent-pending extruded section where the seat mounts rather than the aluminum subframe and forged section found on the 2016 CRF450R. Noteworthy differences between the CRF450RX chassis and the motocross version include RX-specific aluminum engine mounts that are shaped differently to achieve a desired frame flex characteristic, and the fact that the RX also features a removable aluminum sidestand.

The RX’s wheelbase checks in it 58.1 inches, slightly shorter than the CRF450R’s 58.3-inch wheelbase, but it gets the same 23.5mm shorter aluminum swingarm that’s also nearly a half a pound lighter to reduce unsprung weight while also being stiffer than the ’16 swingarm—both vertically and laterally. Front end rake is 27 degrees, 22 minutes (vs. the ‘16’s 27-degree, 4-minutes rake) and the trail is 116mm. A new triple clamp offset features an offset of 22mm and eliminates the steering damper, although the mounting boss is still located on the triple clamp so that the Honda damper can be added as an accessory. Other dimensions include a 37.8-inch seat height and 12.9 inches of ground clearance.

The 2017 CRF450R’s 2.2-gallon fuel should suffice for longer rides as well as GP- and GNCC-style events. The larger fuel capacity and the starter do add considerable weight to the overall package, with the RX checking in at a claimed 261 lbs. versus the 2017 CRF450R’s claimed 243 lbs.

Off-road fans rejoice: You can forget about needing a special, high-pressure air pump to tune the CRF450RX’s fork because it doesn’t need it. Just like the 2017 CRF450R, the RX gets a fully adjustable 49mm Showa fork with internals pirated from Showa’s race kit suspension. Front wheel travel is 12 inches. Out back, a new Pro-Link rear suspension includes a fully adjustable Showa shock with a top mount that is 39mm lower in the chassis to lower the bike’s CofG and to clear the new airbox layout. Honda says that the new rear suspension design parameters shift the load ratio rearward for improved traction. Rear wheel travel is 12.3 inches, .1 inch less than the CRF450R. Both the front and rear also incorporate off-road specific valving.

The CRF450RX’s electric start switch is mounted on the right handlebar but Honda has economized the engine kill switch and the power mode select switch (yes, the RX gets the cool three-way power mode select feature as well) into one unit. The bar itself is a 7/8-inch Renthal unit with a crossbar. Hand guards do not come standard on the RX. The slim seat features a seat cover that is intended to allow easy rider movement when sliding forward or backward.

The CRF405 RX’s all-new bodywork features slim radiator shrouds and narrow front and rear fenders, and it carries in-molded graphics to better resists scrapes and dings on the course or on the trail.

Honda has not yet set a price for the 2017 CRF450RX, but we can’t wait to get our hands on one to see if it will be the new king of the off-road jungle. 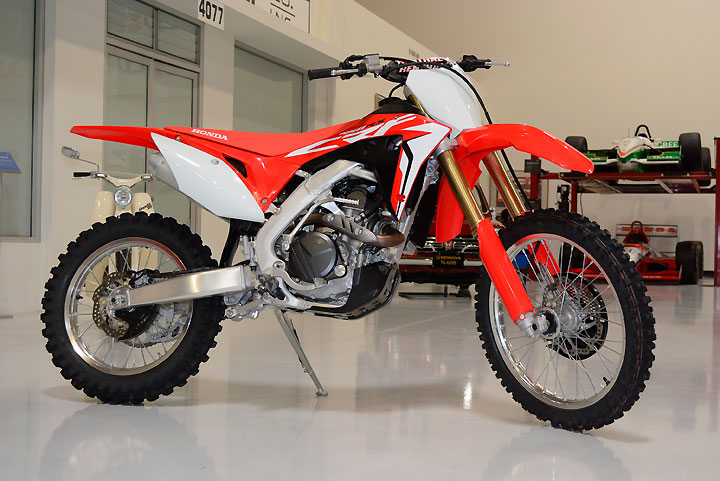