The following is from Yamaha Motor Europe, regarding the signing of Swedish rider Albin Elowson to the Johansson Yamaha Official Junior Enduro team, which competes in the 2018 FIM EnduroGP World Championship. The series begins March 17, 2018, in Helsinki Finland, but the Junior championship chase actually begins at round two in Santiago de Compostela, Spain, April 29. The official release follows:

The Johansson Yamaha Official Junior Enduro Team are pleased to confirm the signing of Albin Elowson, with the up and coming youngster set to contest the 2018 FIM Enduro World Championship aboard the team’s Yamaha WR250F machine. A standout performer in the previous two seasons of Enduro World Championship competition, the 22-year-old Swede has his eyes set on the top step of the Enduro Junior class podium in the rapidly approaching 2018 series.

Kicking off his participation in the Enduro World Championship with an impressive runner-up position in the Youth Class in 2014, Elowson has secured two more top three championship results during the previous two season. Runner-up in the under-23 Enduro Junior category in 2016, the young Swede battled through injuries to wrap up the 2017 season in a solid third place.

“I couldn’t be happier with how things are moving forward,” Elowson said. “I believe that to become a member of the Johansson Yamaha Official Junior Enduro Team is a big step forward in my career. Being a member of Yamaha’s official team in the Enduro Junior class will now allow me to totally focus on my goal of becoming a World Champion. In 2016 I was a runner-up in the championship and then last year, despite missing five race days due to injury, I managed to get third in the series. For the coming season, I want to battle for the title in Enduro Junior. I’ve worked hard during the off-season, and I will keep doing my best in the weeks leading to the start of the season. My training has been going great so far, and my goal for the season is to consistently secure a spot inside the top three in my class. I’ve been training on the team’s WR250F for some time already, and it’s impressive how the bike handles. The feeling in corners and jumps is completely new to me, and its power is great for a 250F. For me, this is the best race bike I’ve ever ridden.” 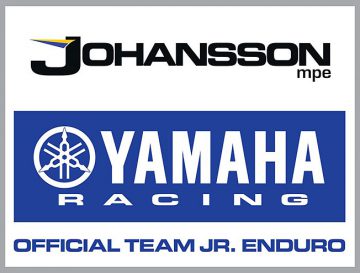 Remaining focused on youth rider development, the Johansson Yamaha Official Junior Enduro Team are looking forward to entering the 2018 series with Albin Elowson as their lead rider. Managed by former WEC competitor Joakim Johansson, the Swedish-based team will be Yamaha’s official representative in the Enduro Junior category for yet one more season.

“We are excited for this new season,” Johansson said. “It is not easy to find riders that are 100-percent dedicated to winning, but Albin is one of them. He wakes up in the morning doing his best to get better and improve. We spent a whole week together when he was starting his pre-season training in Spain, and we were impressed by his professionalism. We are all looking forward to the new series. Based on the latest edition of the WR250F, we have a new bike that we’ve developed over the winter. Albin is really satisfied with the progress, and he will keep working hard in order to get as much seat time as possible before the beginning of the racing season. It is a little bit disappointing that Junior class riders won’t contest the opening round in Finland, but It is what it is and we will focus on the remainder of the championship. Together with the World Championship, Albin will contest the Swedish Enduro Championship and selected events such as the Gotland Grand National and the Novemberkåsan. Those are special events with thousands of fans attending them every year. Albin will return to the Novemberkåsan as the reigning champion, and this is going to be a very important race for us. As for the World Championship, our goal is clear–we want to win the title in the Junior class and we will do our best to make it happen.”

With the 2018 FIM Enduro World Championship officially kicking off in Finland in March, Enduro Junior class riders will join the series for the first time at the second round in Spain in April. Featuring a total of six rounds and twelve race days in varied terrain and conditions, the Enduro Junior World Championship is expected to be challenging for all competitors.