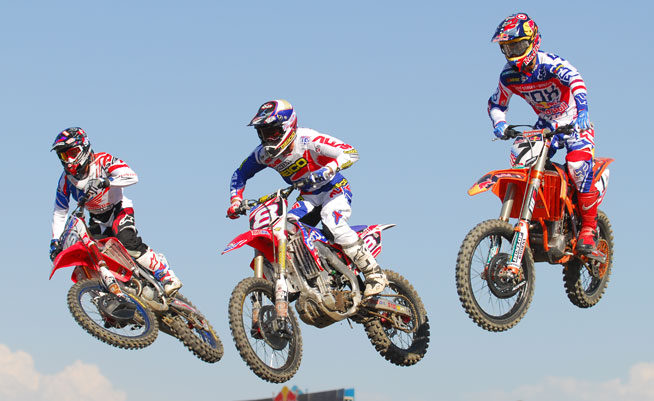 America’s representatives to the 67th Annual Motocross of Nations took to the track in its stars-and-stripes gear before the US press at Lake Elsinore Motocross Park today, on the weekend of the final round of the Lucas Oil Pro Motocross Championship. The three-rider team, which consists of Red Bull KTM’s Ryan Dungey, Muscle Milk Honda’s Justin Barcia and GEICO Honda’s Eli Tomac is hoping to assuage a frustrating defeat by Germany at last year’s event in Lommel, Belgium, and if they do, they will do it on the Germans’ home turf. This year’s event is set to take place in Teutschenthal, Germany, September 28-29.

First held in 1947, the Motocross of Nations is the closest thing to the Olympics in the motocross world, and as one might expect, each participating country enters puts tremendous effort into winning it. The scoring for the event works on points system with first place in a moto awarded one point, second place two, and so on, with the lowest team score determining the event winner. The event is composed of three classes: MX1, MX2 and Open. Each class faces the others twice over the course of three motos.

While it is won by an individual country, the Motocross of Nation is a special challenge for Team USA as it often takes on the flavor of a battle for supremacy between the two axis powers in the sport, the US and Europe. Each year, various European teams seem to step up their game to battle for the win against Team USA. Even so, Team USA Manager Roger DeCoster, a motorsports legend who has tasted victory 10 years in a row as a rider for Team Belgium and a record 13 straight times as the Team USA manager, said that there are certain teams that could pose more of a challenge to Team USA, which has won seven of the last eight MXoN events and has gone undefeated in the history of the event whenever it has been held in Germany.

“The French could be good, and the Germans last year were better than I expected as well, but I don’t think they are going to be as good this year,” DeCoster said. “(Italy’s) Antonio Cairoli is really good, but I don’t think they’ll have the third rider they need (to threaten for the overall win). I expect the French and Belgium to be the strongest competition, but I would say to anyone that it is kind of them (Europe) against us, because if one country is tied with the United States going into the third moto, the other countries may make it tough on the USA. There is an atmosphere that it’s the World Championship circuit against the US circuit. People always ask are the Europeans the best or are the Americans the best. Last year they did beat us, and they were better than us.”

The veteran member of this year’s Team USA squad, Dungey, who will race in the MX1 class, remembers the frustration of last year’s event in Belgium, and he is seeking a little revenge.

Dungey also said that if he could pass along any advice to his teammates, it would “to stay calm. It’s a team effort, it’s not just about one rider.”

Barcia, who made his debut for Team USA at the Belgian event in 2012 and will ride in the Open class this year in Germany, agreed.

“Like Ryan says, you’ve gotta stay calm and let it come to you,” Barcia said. “Last year it was definitely stressful. We really wanted to win, and the track was extremely tough. We rode in sand, and five or six of those guys (competitors) had a real advantage…and we struggled. I think this year the track is going to suit our style a little better and be a more even playing field.”

Riding in the MX2 (250cc) class, Team USA rookie Tomac will certainly be a lesser known quantity on the world stage, but he hopes to counteract the stress of the event be focusing on maintaining the individual momentum that he has enjoyed while wrapping up the 2013 250cc Lucas Oil AMA Motocross Championship.

“It is a team effort, too, “ Tomac added. “But also I think that this year isn’t as unique of a track as it was last year, and that’s better for me as a rookie.”

DeCoster added that the pressure to win is great not just because of Team USA’s well-established dominance, but because the event itself draws so much attention.

“It’s like what we see in soccer, maybe,” DeCoster said. “Every country is there, and they (fans) all come and support their teams. For me it is a coolest event of the year because it the best riders from every country, and you see all the best riders racing each other. There are a lot of fans and a great atmosphere, and it can get pretty crazy. You see all kinds of things.”

American motocross fans hope that one of them will be the start of another Team USA winning streak.