There are times in this gig when you get an assignment that brings everything into perspective. One of those rare opportunities came along about a week ago when Motorcycle.com Editor-in-Chief Kevin Duke phoned me and asked me if I could come and shoot a few pictures of one of my favorite people in the world, Tom White, as he received one of the 50 new, purpose-built Indian Scout FTR750 flat track racers at White’s Early Years of Motocross Museum in Southern California.

“Do you know where it is?” Duke asked me.

“Uh, yeah, you could say I’ve been there a few times,” I replied. “Hell, I’ve tried to convince Tom to let me live there a time or two.”

I’m always delighted with every opportunity to see Tom White. I’ve unashamedly told several of my colleagues in the past that in the 25 years I’ve been a motorcycle journalist, there are two motorcycle industry people that have influenced me, educated me and furthered my career more than any others. Tom White is one of those two people. When I was a greenhorn journalist just trying to figure out how to put together a project bike that would show my contemporaries at the weekly motorcycle newspaper where I worked that I knew what I was doing, I called Tom, then the owner of White Brothers, which was one of the big three aftermarket motorcycle distributors in the country, and I asked if he could help. As we spoke, I think he realized that our blood pumped the same oil, as I was well aware of his career as an AMA Grand National Championship competitor, his company and some of the many cool project bikes it had accomplished for magazines in the past. We talked about flat track, vintage bikes and all of the heroes that we shared, guys like Malcolm Smith, Roger DeCoster and Joel Robert. We talked about the 1967 Greeves Challenger that he had purchased and restored. Then Tom invited me down to visit White Brothers’ Yorba Linda facility. I’ll never forget when he said, “Come with me,” handed me off to one of the company’s associates with the simple statement, “This is Scott Rousseau with Cycle News. He loves flat track. Give him whatever he needs.”

It was just the first of so many fond memories that I have of Tom White, and as I turned down the driveway of his Villa Park home, they were swirling through my head, mixed with apprehension, because I was afraid of what I would see when I got there.

It’s no secret that Tom White, one of my heroes, is battling terminal cancer, and I was scared and saddened at the possibility that I would arrive to find only a shell of the infectiously happy, incredibly witty and hilariously funny man that I had come to love and respect so much. The thought of a personality as genuinely beautifyl as Tom White being in pain had me hurting inside.

And yet when I arrived, I found… my hero, walking tall, big smile on his face, same spring in his stride as always. His bravery has not diminished, nor has the light in his eyes nor his love for his family, friends and the sport that has ignited his passion for life flickered or waned. To look at him, you might not even know he is ill. There’s still work to be done and goals to accomplish, things such as the book he is writing, which I’m sure will be a best-seller. Tom White isn’t done, not even close.

Before we arrived, Duke had asked me if I would be interested in writing a feature story on the Early Years of Motocross Museum, and I answered with a “not really.” After all, it has been so many times, and rightfully so, that I didn’t feel like there was anything I could add. Instead, I suggested that we talk Tom into selecting 10 favorite motorcycles in vast collection of over 200 concourse-quality machines. So we pitched the idea to him.

“What?” White responded jokingly when asked. “Are you kidding me? Should you have a favorite child!?”

But it took only a few moments for him to put his hand up to his mouth, wiggle his fingers and say, “Come with me.” The motorcycles you see here are what came out of that magical day.

As always, Tom, thanks. 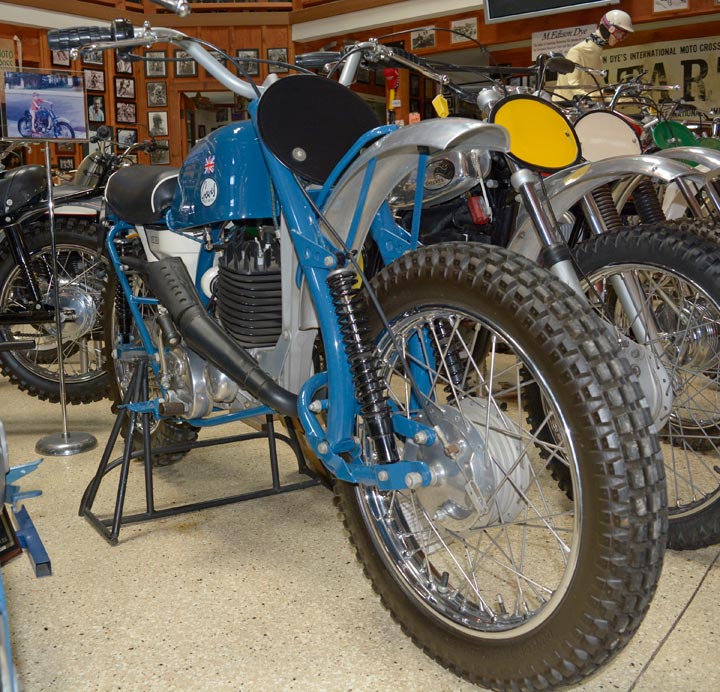 We have to start somewhere, and for Tom White, this 1967 Greeves Challenger was the starting point of his immaculate collection of vintage motocross, off-road, flat track and roadracing machines. This is the machine that we talked about on the phone when I first spoke to Tom White all those years ago.

“Back in 1984 we were at an event,” Tom relates, “and we saw this Greeves for sale. My son, Brad, who was about 6 at the time, said to me, “Dad, we should buy that bike and restore it,” White recalls. “So we did buy it. I never really thought it was going to be the start of what we have now. Later I just realized that when it came to preserving all of this great motocross history, nobody was doing a very good job.”

And when Tom White has taken on a project, it almost always ends up as a job well done. This 1967 Challenger is proof. Sort of the zenith of Bert Greeves’ competitive efforts, the Challenger was far ahead of its peers in terms of innovation if not always execution. The British-built machine sported components such as an aluminum I-beam frame and a leading-link fork that were considered radical for a production dirtbike in that era, and the brand enjoyed success in Europe with factory riders Dave Bickers, Bryan Wade and in America with Gary Bailey, who later became known as “The Professor of Motocross.” It helped to make Greeves the most popular motocross brand in America in the sport’s formative years, but the rest of Europe started to catch on, and soon lighter and faster machines from Husqvarna and CZ overshadowed Greeves, which went out of business in the early 1970s.