Travis Pastrana Barge Jump Video: Flipping Out on the Thames!

There really isn’t much that Nitro Circus main main Travis Pastrana can’t do on a motorcycle. If he can imagine it, it’s a safe bet that he will figure out a way to pull it off, as this Travis Pastrana barge jump video amply shows.

The action sports icon (and lets not forget, former AMA 125cc Motocross Champion–Pastrana won that title way back in 2000 as a member of Team Suzuki) added another world’s first to the list of stellar freestyle motocross stunts that he has successfully performed when he became the first rider to successfully land the first barge-to-barge motorcycle backflip in Great Britain this week.

Pastrana selected the legendary River Thames in London, England, for the feat, and it was apparently no picnic as he had to contend with high winds and rough waters while casing the stunt. However, when the time came, Pastrana was pinpoint accurate, soaring through the year to bring his motorcycle home safely onto the landing barge. 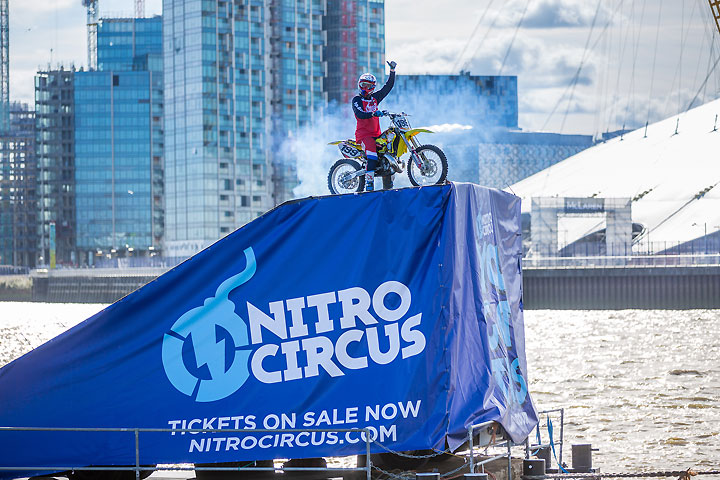 The spectacle was only enhanced by his location selection, as the Pastrana barge jump took place with London’s iconic O2 Arena serving as the background. The O2 Arena served as the site for many of the 2012 Summer Olympics events. It has the second-highest seating capacity of any indoor venue in the United Kingdom, behind the Manchester Arena, but it is renowned for being the world’s busiest music arena, surpassing New York City’s Madison Square Garden in 2008.

While the Pastrana barge jump is a new record, we still think that it pales in comparison to some of Pastrana’s other feats, such as the world’s first successful double backflip shown below. Even so, Pastrana continues to be the trendsetter in freestyle motocross, and it’s hard to argue against Nitro Circus being one of the wildest and most cutting-edge action sports motorcycle shows on planet Earth.

Rest assured there is more to come, though. If Pastrana can dream it up, we’ll see it.