Think that actually riding your dirtbike is the most dangerous thing you can do? As this video shows, think again. 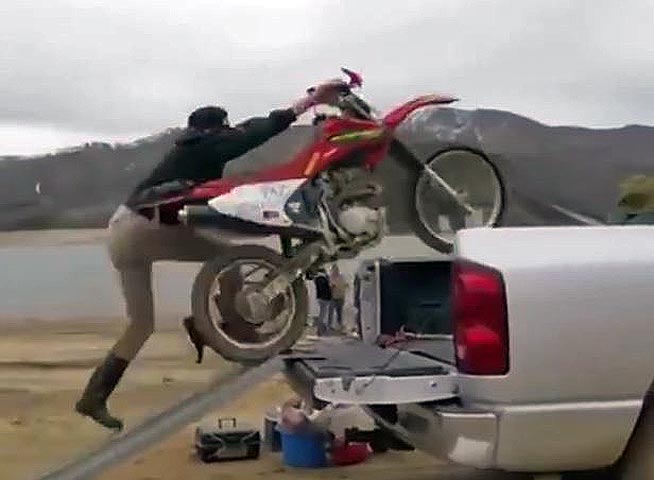 Found on Dirtbike Obession’s Facebook page, this video collage showcases the trials and tribulations of loading a dirtbike. Hey, it happens. We’ve all been there. One of my most heinous dirtbike crashes happened the same way.

Along about 1990, I was loading my 1982 Honda XR200R into the back of my pickup for a trail ride. At that point, I had seven bikes, ranging from a 1988 Honda CR500R to a pair of Honda CT70s, but that little XR was my favorite. Despite being about five years old when I got it–I rescued it from a friend’s garage by trading him for a Tamiya RC car that I had won in a drawing, so it was free(!)–the little thumper was in pristine condition, and it had just enough power to be loads of fun while offering a light, good-handling chassis and reasonably good suspension for its era. Hell, I even raced it in a local Hare Scrambles one time and got seventh in the 200cc class against KDX’s and Can-Ams that were at least five years newer.

I poured so much love into that little machine. If something broke, I replaced the part with an OEM part immediately. It was stone stock and perfect. And then it tried to kill me. The attempted murder took place as I was trying to load it.

The Rousseau homestead had a short but steep driveway that made loading bikes easy. Just place the truck at the bottom, set up the ramp and coast right into the bed. I had it down to a science as I could jump off the ground and let the momentum of the coasting bike sort of lift me into the back of the truck. It couldn’t be simpler.

That all changed the day that the ramp and the bike conspired at the exact moment that I let my attention lapse. The bike hit the bottom of the ramp, and the ramp decided to do the electric slide to the right, but not before I was hovering in the air between the concrete and the tailgate. As the XR and the ramp exited stage right, I managed to get my left foot onto the tailgate in an attempt to avert the inevitable disaster, giving the XR significant leverage, of which it took full advantage. As my body came crashing to earth, the XR landed dead on top of me, pinning me like WWE Champion Brock Lesnar. And there I was, lying in the middle of the street, almost completely covered by motorcycle.

It took a full 10 minutes of me lying there, gasping for air, before a neighbor who just happened to be coming home saw the bike lying next to the truck and realized that there was a human being under it. He quickly extracated me, much to my eternal shame. I haven’t seen the guy in years, but whenever I do, that is one of the first “memories” that gets shared.

So don’t judge the poor souls in this video too harshly. They are our brethren after all. And it has happened to the best of us.