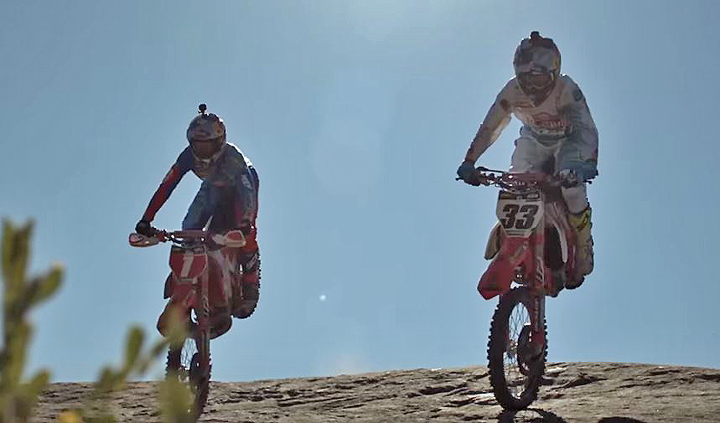 Red Bull athletes Cody Webb and Taylor Robert are clearly among the best off-road motorcycle riders on the planet today, and this new video on Red Bull’s YouTube channel clearly proves that.

Webb, the reigning AMA EnduroCross Champion, and Robert, who scored the Individual overall win at the 2016 ISDE, recently took a trip to Donner Ski Ranch at Donner Pass in Northern California.

“It’s every dirtbiker’s dream to go out and explore new territories,” Webb said. “Many of these areas we wish to ride are completely off limits to any sort of motorized fun. When Red Bull approached us about filming a freeride-type segment, Taylor and I were all in!”

In addition to the mind-bending cool off-road terrain that is prevalent in the area—Donner Ski Ranch has hosted rounds of the AMA National Championship Trials Series in the past—Webb and Robert took their moto wizardry a step further by tackling some of Donner Ski Ranch’s man-made “obstacles” with visually stunning results.

“Taylor and I were willing to do whatever it took in order to make the video epic,” Webb said. “Not long into the first day of shooting, Taylor took a gnarly spill and we later found out that he broke his middle finger. He rode like an animal the next two and a half days, holding the pain at bay just to make a next-level edit for everyone to enjoy.”

So enjoy the video. Like so many that these two American superstars have been part of, it is eye candy of the highest magnitude. Red Bull captured one awesome ride!