Red Bull Straight Rhythm Is Back, And It’s All Two-Strokes 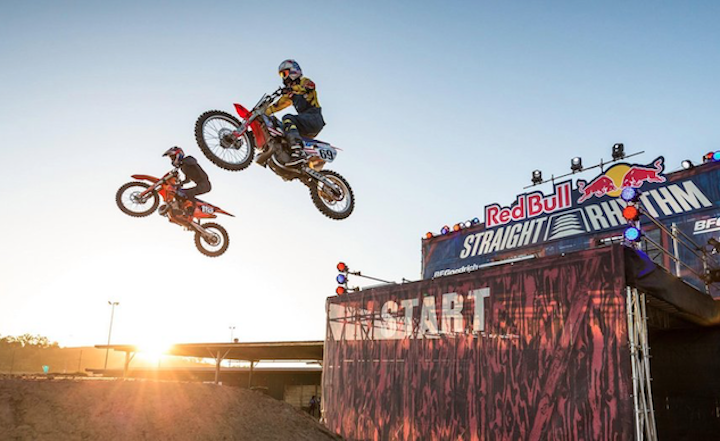 The unique Red Bull Straight Rhythm event is back again this year for its fifth installment, but this time, it’s all about the two-strokes – yeahhh baby. There won’t be any four-strokes lining up, but you will see some electric Altas – kind of like a past meets future type of shindig, which is pretty awesome when it comes to motorcycles. Girlfriends, not so much.

When the two-stroke class was introduced last year, it was all anyone could talk about, and there was a shitstorm of trash talking that ensued back-and-forth amongst the riders prior to the event, fueled by none other than Ronnie Mac. Of course, it was all in good fun, and no feelings were actually hurt – motocross racers are some of the toughest athletes in the world, after all – but it was pretty hilarious nonetheless and added an extra element of excitement. It’s racing; you have to try and ruffle your competitor’s feathers somehow, and why not give the crowd something to cheer for, right? The two-stroke races were by far the most anticipated of the night.

Well, this year Red Bull is going all in and we can expect some big-timers to show up with their old two-smokers, as well as many of the current 250/450 guys. Last year Ryan Villopoto lined up on his KX250, and Travis Pastrana on his RM-Zilla 500 the year before. We might see some other motocross legends like Ricky Carmichael, Jeremy McGrath or even Kevin Windham dusting off and getting reacquainted with their old steeds to see if they still have what it takes to run with the young guns. Who knows?

It’s been pretty cool to see the resurgence in popularity of two-stroke motocross racing, and two-strokes in general. There’s definitely a sense of nostalgia that comes with it, plus they’re cheaper to own and maintain. The 125 All Star Series was added as an additional class for six of 12 rounds of the Lucas Oil Pro Motocross Championship due to the growing interest and popularity in 125cc two-strokes. 125s have an interesting powerband; like a light switch really, it’s all or nothing, so racing them means you’re holding it wide open the entire time. And brakes? Who needs ‘em. Gas is on the right.

This year’s Red Bull Straight Rhythm is October 20th in Pomona, California. Check out last year’s full race below, and Red Bull’s announcement for this year’s event further down.

Santa Monica, Calif. (June 14, 2018) – Four piston strokes. Electronic Fuel Injection. Slim headers without an expansion chamber. Sleek, non-clunky, space-age plastics. This is a list of things you won’t see at the 2018 Red Bull Straight Rhythm. And when the event returns to Fairplex in Pomona on October 20, you’ll hear it coming. From, like, miles away. Because there will be only two-strokes racing. Ring-a-ding-ding. That’s right, the event will step back in time to an era where gear sets were mostly pink, Fresno was smooth and a nac nac was totally rad (kind of still is). Riders will leave their fancy factory four-strokes at home and will run what they brung as they tackle the ½-mile-long straight rhythm track on nothing but two-smoke power.

After the two-stroke class was introduced at the event last year, nostalgia took full effect, and everyone cared about little else. While most of the action took place on the track, it also got pretty heated online, as riders like Ryan Villopoto, Chad Reed and Ronnie Mac talked serious trash to each other long before lining up to race. This year all the fat has been cut, and there will be half as many piston strokes but twice as much fun. The race will consist of two classes – 250cc+, and 150cc & under. And, yes, it is all two strokes…well, with one exception. Those mad scientists at Alta Motors will be allowed to run electric in the 250cc+ class. Think of it as a “return to the past, but keep an eye on the future” philosophy. But mostly two-strokes. Lots of two-strokes. Like, 96.2 percent two-strokes. Maybe check that math.

Despite the bike changes, the concept remains the same. Line up side by side and race head-to-head down a ½ mile of rollers, whoops, doubles, tables and all other kinds of rhythmic insanity. Racing is a best-of-three format, so each rider gets at least two chances to grab victory. This also helps to cut down on all the crying about bad starts at the after party. In its fifth year, the event will continue the format where practice, qualifying and racing will all take place on the same day, with the finals taking place at night under the lights.

Red Bull Straight Rhythm debuted in 2014 at the Auto Club Raceway at Fairplex in Pomona, and saw James Stewart win in the Open Class, with Marvin Musquin taking home the top spot in the Lites Class. In 2015, James Stewart defended his title, once again landing on the top of the podium in the Open Class, with his brother Malcolm taking first place in the Lites Class. In 2016, Marvin Musquin returned to the event and dominated the Open Class, with Shane McElrath taking the win in the Lites Class. Last year’s event introduced the two-stroke class, and saw Gared “Stank Dawg” Steinke win in the class, with Marvin Musquin winning the Open Class and Shane McElrath taking the win in the Lites Class. Tickets for the event are on sale now with “Holeshot” special pricing available only until July 13. Each single-day ticket gives access to practice, qualifying and the finals. With over 10,000 grandstand seats – plus an infield – spectators will be treated to a one-of-a-kind experience while watching an all-out sprint to the finish line. For those that need a break from the action, spectators will also have access to the race pits, numerous concessions and side acts throughout the day, offering something for the whole family. Tickets can be purchased at redbull.com/straightrhythm.