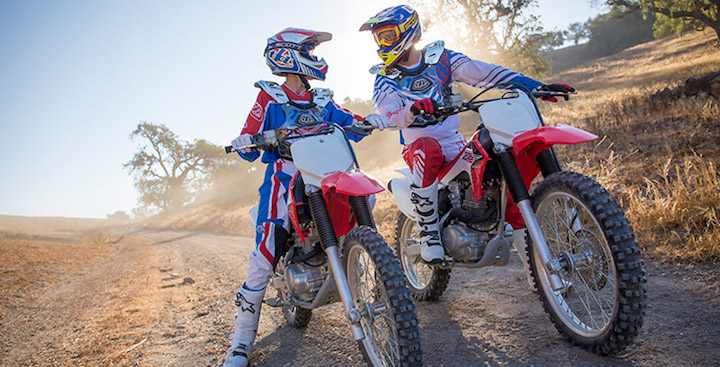 Riding motorcycles off-road is one of the most fun things you can do on two wheels. If you haven’t tried it already, we seriously urge you to give it a shot; we can almost guarantee you’ll love it. Dirtbikes, though, are different from street bikes in a lot of ways. All the fundamentals and mechanics of riding them are the same, but they’re stripped of pretty much anything that isn’t necessary – a bare-bones bike, if you will – which is great, because there’s fewer things to break and replace when (not if) they get dumped in the dirt. Also, they’re lighter, which makes picking them up off the ground easier, too. Additionally, there’s the terrain to deal with, which of course can be bumpy, rocky, loose and uneven. Because of this, dirtbikes have much higher ground clearance and more suspension travel than street bikes, which as a consequence, results in taller seat heights. This, of course, is one of the biggest obstacles the vertically challenged can encounter, and it makes it harder to build your off-road confidence.

If you happen to be on the shorter side of the spectrum, which we assume you are since you’re reading this, don’t fret! Not only are there options for you, there’s plenty to look forward to and get inspired by as well. Ricky Carmichael – The GOAT – short for Greatest Of All Time (no pun intended, ha!), has a dirtbike racing championship resume longer than a CVS receipt, and there are amusement park rides even he can’t ride. Just kidding, but he stands 5-foot-5, which is probably similar to many of you. So, there’s hope, I tell ya!

Dirtbikes get bigger and taller as their engine displacement goes up. There’s no short-version 450cc bikes, unfortunately. Still, there’s hope, and you too can one day work your way up to ripping the big-bore bikes with the big boys, but in the meantime, you’ll have to get comfortable on something smaller first. And believe me, there’s nothing that will steer you away from dirtbikes quicker than jumping onto and starting off on a bike that’s too big and too powerful. It will be an overwhelming and miserable experience, trust me, and we don’t want that.

Learning to ride dirtbikes, improving your skills and conquering your fears through obstacles you thought weren’t possible is one of the most fulfilling feelings you can experience. The beauty of riding off-road, if you’re somewhat persistent about it, is that you get incrementally better each and every time you go out, and this gratifying feeling of success and achievement is what keeps you coming back. On top of that, you get to go out to explore and see places you otherwise might not ever get to experience. What’s not to love about that? So, where do you start? 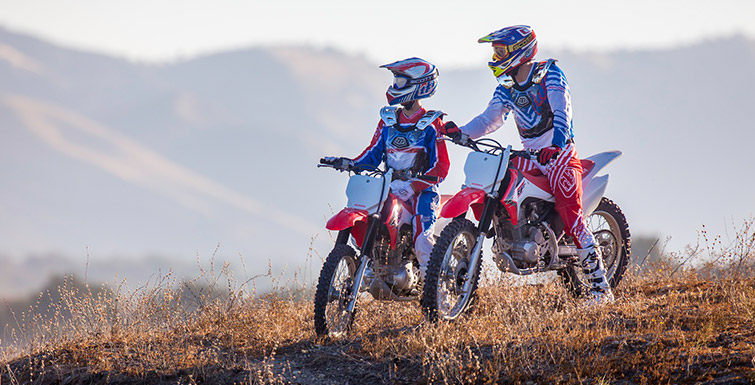 Well, it all depends… Probably not the answer you were looking for, but it really boils down to three things: What type of riding you intend on doing (trail or motocross), your current riding ability level, and of course, how tall you are. These three factors will determine the direction you’ll want to take when looking for a dirtbike that’s going to fit you and your needs best. Odds are, you’re most likely starting out, and fortunately, there’s a ton of options.

The easiest and most fun way to start riding dirtbikes is on trail-oriented bikes rather than motocross bikes. Honda and Yamaha have the most complete lineup of smaller dirtbikes designed to help learning riders build their confidence. Just about the whole Honda off-road line carries the CRF model designation now, but you’ll want to look for the models that end in F, not R or X, such as the CRF150F or CRF230F. The R signifies bigger, more powerful competition bikes and the X is for full-sized trail bikes; you’ll want to stay away from those for now. Yamaha has its TT-R trail bike line, and these are the models you’ll want to pay attention to (you can ignore the R in this case, Yamaha’s YZ line is its competition line). Suzuki and Kawasaki have options too, but they’re more limited. Both focus on either smaller-cc bikes for children mostly or bigger competition bikes, but if you’re really a smaller or shorter rider, they most likely have an option for you.

Being a vertically-challenged rider, you’re going to want a bike you can sit on with both feet on the ground. You don’t have to be completely flat footed, but you don’t want to be tip-toeing it either. As long as you fall somewhere in the middle and have good stability, you’ll be fine, unless you’ve never ridden before. Then we would suggest something you can easily flat-foot on. For most shorter adult-sized riders, depending on how tall you are, you’re most likely going to fit best on either Honda’s CRF150F (32.8 in seat height) or CRF230F (34.6 in), and similarly on Yamaha’s TT-R125LE (31.7 in) or TT-R230 (34.3 in). All four bikes make our list of best dirtbikes for short riders because they feature electric start and are as user friendly as they come.

Kawasaki offers its KLX140L (31.5 in) and KLX140G (33.9 in) models too, which also feature a convenient electric start, and Suzuki has its DR-Z125L (32 in), but it’s kickstart only – something beginner riders could potentially get frustrated with. For a beginner rider, especially off-road, you’re going to be stalling the bike a lot at first, and there’s nothing that will take the wind out of your sails faster than continuously having to kickstart the bike over and over. That little magic e-start button on the right handlebar is priceless.

The 230 models are really great options for a number of reasons, if you can comfortably fit on them. They’re smaller than the full-size 250s, whose seat heights stand almost 38 inches tall, but they’re the perfect last stepping stone before ultimately graduating, if you eventually feel comfortable enough after mastering the 230. Also, the 230s’ air-cooled motors don’t produce nearly as much power as liquid-cooled 250s do, which will definitely help you work on and refine your skills. And don’t worry, they still produce plenty of power to get you just about anywhere. On top of that, these Honda and Yamaha motors are virtually indestructible. I’ve seen them run under water – seriously – and for a lot longer than I would have ever imagined, only to fire right back up and continue on down the trail. And their maintenance requirements are much less stringent than the competition machines.

If the 230 is still too big, the 150, 140 or 125 is your ticket. All you have to do is pretty much pick your favorite color. These bikes are also incredibly capable, despite their smaller displacement. My girlfriend is 5-foot-3 and she’s been riding a Honda CRF150F for the last two years. She recently hopped on a 230 to take for a spin. She loved it, but after returning, said there’s still much to be learned on the 150 before moving up. Remember, there’s no shame whatsoever in riding a smaller bike that fits your needs and abilities best. In fact, riding a bigger, more powerful bike you’re not ready for yet only increases your chances of getting hurt, and nobody wants that.

Trail riding is awesome because you can do it just about anywhere, but maybe you’re more interested in motocross. Fortunately, there are MX options for you shorter riders out there, too. And of course, motocross bikes will feel as at home on the trail as trail bikes, however, trail bikes will reach their limits sooner on the track. Motocross bikes are designed for jumping, more so than trail bikes, so their suspension components are bigger and stronger, delivering more travel as well. They’re also lighter and more powerful too – which is great – but as a compromise, they will require more maintenance, and they’re kickstart only – though the new Yamaha YZ250F has the magic e-start button. Just some things to consider.

All these bikes are much lighter, faster and higher performing than their trail-focused counterparts, however, they’re all much less forgiving when mistakes are made, and again, they’re all kickstart only. We recommend these bikes only to shorter riders with more experience.

In the end, like we mentioned before, determining the right dirtbike for you essentially comes down to three factors: What type of riding you intend on doing (trail or motocross), your current riding ability level, and of course, how tall you are. Dirtbiking is some of the best fun you could possibly have, but a lot of it comes down to riding a bike that fits you and your needs best. Becoming a better off-road rider is long process, but it’s an incredibly fun and rewarding one as well. Choosing a dirbike that fits your riding goals, ability and size can be the deciding factor between some of the most fun you’ll ever have with a lifetime full of awesome memories, or a lot of potential pain and frustration. Which one of those sounds like the better option?

Go down to your local powersports dealer and sit on some bikes – heck, sit on them all! – and find out what fits you best and what you think feels most comfortable, or pick the bike with your favorite color plastic. As long as the bike fits you properly, you’re going to have a great time. We can almost guarantee it.