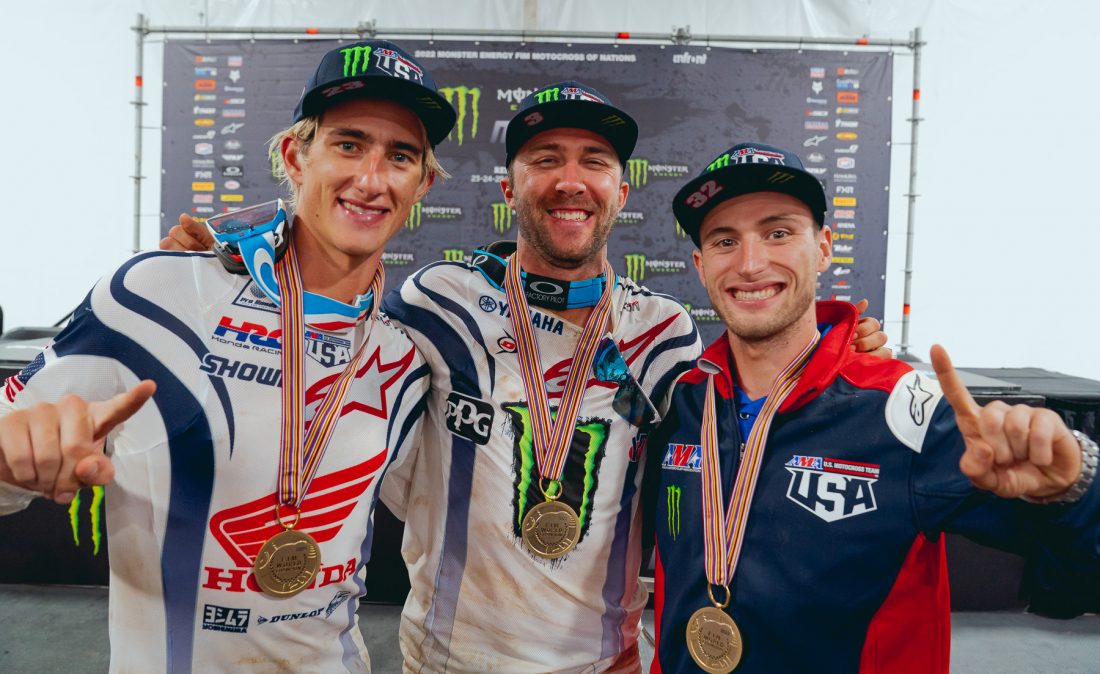 “This Motocross of Nations was a perfect demonstration of the success that comes from having the right people — motivated and talented people — in the right positions, from our team coordinators to the riders themselves to our team manager,” said AMA President and CEO Rob Dingman. “Congratulations to all who contributed to this effort, and particularly Eli, Chase and Justin, who rode exceptionally well and demonstrated the utmost professionalism while representing America.”

Tomac finished 1-6 in the MXGP class. Sexton finished 2-3 in the Open class. And Cooper finished 9-4 in the MX2 class. Cooper’s result, the best in the MX2 class, earned him the individual championship in that event.

“When we’re on top of that podium, there is nothing like it,” said Tomac, the Team USA captain. “The whole motocross community comes together for this event. I’ve been on the top of the podium before, but this takes the cake. I will never forget that moment. It will stay with me forever.”

The Motocross of Nations teams are selected by the national federations affiliated with the FIM in each participating country. In the United States, that’s the American Motorcyclist Association. AMA Director of Racing Mike Pelletier runs the AMA effort to select, organize, support and help fund the team.

“The cooperation this year was off the charts,” Pelletier said. “Of course, the riders’ teams themselves, which included Star Yamaha and Team Honda, were behind this effort 100 percent. We also had help from industry partners, such as Feld Entertainment, Alpinestars and Monster Energy, as well as other individuals and groups such as Paul Perebijnos, who organized a golf fundraiser, FMF, who produced fundraising t-shirts, and the family of the late Tom White, who held a fundraiser at Tom’s Early Years of Motocross Museum. The AMA can’t thank these partners enough for supporting this championship-winning campaign.”

Dingman added that the U.S. effort would not be the same without its most important volunteer: AMA Motorcycle Hall of Fame Legend Roger DeCoster.

“Roger gives his all to this event,” Dingman said. “His experience and leadership help in ways that can’t be quantified. We appreciate his work and the support of his employer, KTM North America, which allows Roger to be a part of this effort every year.”

Dingman added: “It’s an honor to have the support of so many stakeholders at this event. All year these teams and companies compete against one another on the track and through their support of individual riders. Here, we are one team, Team USA, and I’m proud to say, today we are definitively the best motocross team in the world.”