Yoshimura sent us the following video of JGR Autotrader Yoshimura Suzuki’s Justin Bogle as he continues to prepare for his return to the Monster Energy AMA Supercross Series. 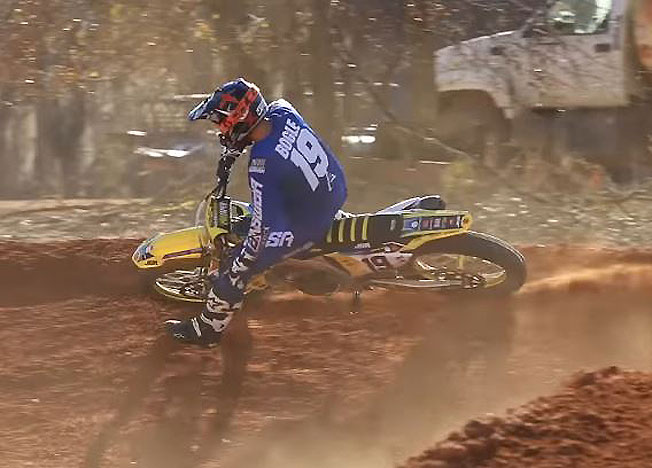 Bogle suffered a crash while practicing for the season-opening Anaheim I Supercross, and the injuries he sustained have forced him to miss Anaheim I, the Houston Supercross and the Anaheim II Supercross as well. JGR Autotrader Yoshimura Suzuki has tabbed Malcolm Stewart to fill-in for the absent Bogle.

But watch the video of Bogle training at Ricky Carmichael’s GOAT Farm in Florida, and it appears that he is just about ready to return to action and take his place alongside teammate Weston Peick, who has put up consistent results aboard his 2018 Suzuki RM-Z450 through the first three rounds of the series.

There’s little question that Bogle was on the upswing prior to the 2018 Monster Energy AMA Supercross Series. In 2017 the Oklahoman scored his first career 450cc moto win during Moto 1 of Round 3 of the Lucas Oil Pro Motocross Championship Series at Thunder Valley, Colorado. He also posted his first 450cc overall win with a 1-3 performance at the Budds Creek, Maryland, round. With the announcement that his RCH Yoshimura Suzuki Factory Racing would fold its tents at the end of 2017, Bogle soon landed a ride with the JGR Autotrader Yoshimura Suzuki team. He is clearly anxious to get back in action and prove that he is worthy of retaining a factory ride.