Beta has released word on its line of four-stroke and two-stroke Enduro models for 2017, announcing new four-stroke machines that feature a combination of RR and RS features to morph them into one family the “street-legal off-road” RR-S.

Last but not least, the 300 Xtrainer returns for 2017 with an updated graphics package. 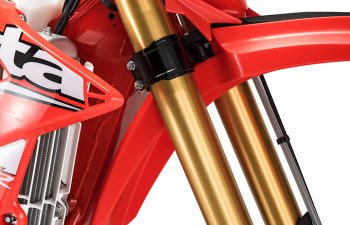 All of the Enduro models feature an upgraded, double split cradle chrome-moly steel chassis and Sachs suspension. Riding in a new triple clamp that is both lighter and more rigid, the fork gets a 5mm length increase for more suspension travel, and it is filled with Liqui Moly fork oil to reduce heat build-up and friction. The Sachs shock features a new high/low speed adjustment system to make the circuits more accurate and independent from each other for easier fine tuning.

Other changes include silver Excel rims with black spokes that are lighter as well as being styled to give the Enduro models a distinctive look that matches their updated graphics. The RR two-strokes also receive new digital instrumentation that features a timer and kilometer/mph indicator with more adjustment features such as instant speed, average and maximum speed as well as the ability to adjust mileage in smaller increments. The new meter also has built-in battery voltage display. RR-S models will come with Trail Tech’s excellent Voyager GPS meter. All 2017 Enduro models also receive a new fuel cap with a built-in breather valve.

2017 Beta 250 RR and 300 RR
Available in September 2016, the 2017 250 RR and 300 RR two-strokes benefit from the input of Beta’s FIM Enduro World Championship factory riders, Steve Holcombe and Johnny Aubert. The two-stroke models were introduced with an automatic oil-injection system on 2016 models (although the system is not found on Factory Edition models). The system is designed to ensure a perfect fuel-oil mix under any condition, and it eliminates the need to premix the oil and fuel. A dual-map ignition allows the rider to switch between two maps via a switch on the handlebar to tailor the power character for riding conditions.