Second only to a helmet, a good pair of boots is the next most important piece of dirtbike riding gear. Although the pros make it look easy, riding a dirtbike can be difficult, especially when the terrain intensifies, and that means your feet aren’t always going to be safe on the pegs. At some point, you’ll be putting your feet down or off the pegs for balance. They also might get caught and twisted in rocks or roots, or you might crash and get your leg pinned somewhere – these are all very common and to be expected occurrences while riding a dirtbike – and the best way to combat potential injury is to invest in the best boots you can afford.

Not all dirtbike boots are created equal. When you’re shopping for new riding boots, you’re looking for things like protection, quality, comfort and reliability. However, price is also an important factor. On the other hand, hospital visits aren’t cheap either. What money you think you might be saving initially in buying a cheap pair of boots, could cost you exponentially in other expenses down the road, and you don’t want that. Take care of what takes care of you – your ankles are important.

If you’re a tentative rider who wants to test the waters to see how much you like riding dirtbikes before investing in all the gear or if you’re on a tight budget, you might be hesitant to spend a lot of money. Motorcycling isn’t a cheap hobby, after all. There are plenty of entry- and mid-level boots out there to get you started. But if you’re riding regularly, or plan to, a higher quality, more protective and durable boot is what you should be considering. Not only will your feet, ankles and legs be better protected, but  the boots will last longer too, justifying the greater investment.

Below is a list of the best, top-of-the-line dirtbike riding boots money can buy, in alphabetical order. 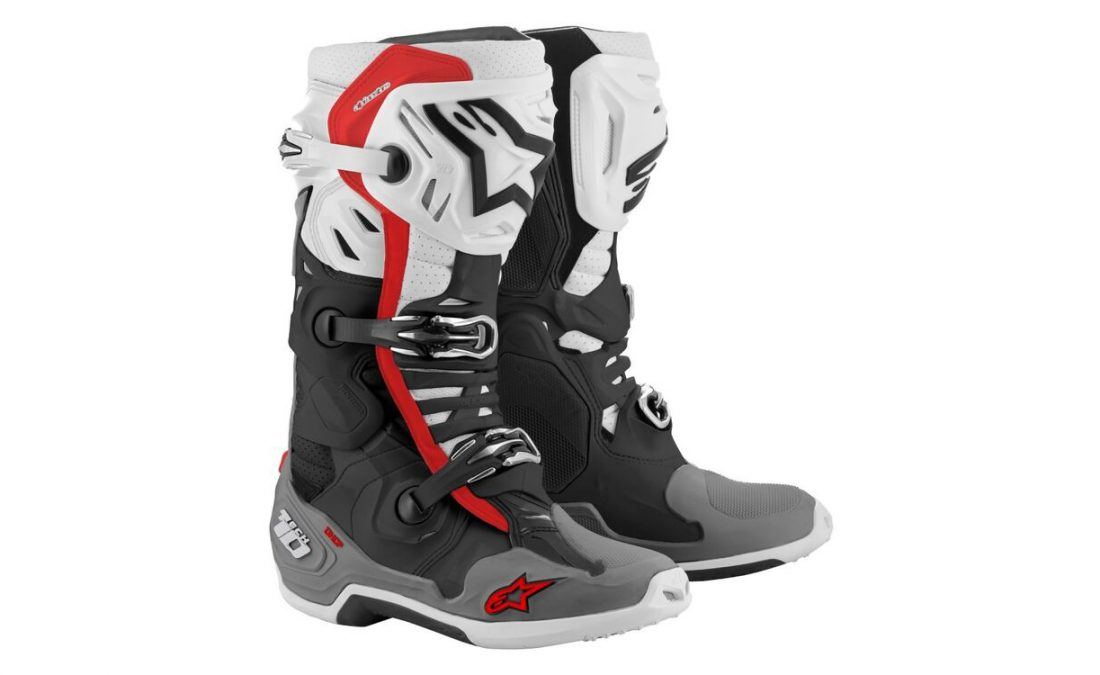 The Tech 10 is quite possibly the most popular and commonly used boot by all the pros and fast guys, and for good reason. It’s considered the benchmark and most technical boot in motocross and off-road. The one-piece co-injected foot chassis incorporates five different compounds in a single lightweight piece to offer strength while maintaining flexibility and structural integrity. The three self-aligning, high-impact aluminum buckles feature quick release and locking, and are easily replaceable.

For 2020, Alpinestars introduced a new “Supervented” version which adds inlet ports and a ventilated shinplate, along with perforated padding and mesh sections to maximize airflow and release heat. The Tech 10 Supervented alsouses a new extended honeycomb-design sole for improved grip.

The Tech 10 Supervented has a new mesh inner bootie with a 3D Higher Spring insole and a biomechanical inner ankle brace, with medial and lateral torsion bars to control ankle and leg rotation, while allowing freedom of movement. These are just a few of the Tech 10’s features, the list goes on and on. The Tech 10s are one of our go-to choices for riding boots because they really do a great job in mitigating hyperextension (one of our biggest concerns), plus they’re super comfy. And hey, they look good too. For more details, visit Alpinestars’ website here.

The Tech 8 used to be Alpinestars’ premier off-road riding boot for years until the Tech 10 was released, and it still deserves a mention on this list. The Tech 8 RS isn’t as technically advanced as its Tech 10 successor, but it’s still a great option for someone looking for a more traditional type boot with a sewn-on sole. The Tech 8 has an anatomically profiled, high modulus polymer shin plate for superior impact and abrasion. Its high modulus calf plate is contoured to fit around the calf and lateral leg, and it connects with the shin plate to ensure all round protection and structural integrity. Additionally, it’s got a contoured, tempered steel shank that’s over injected inside the mid‐sole assembly for rider safety and support. One of our favorite features, though, is the replaceable TPU kickstarter protection insert located on the right boot – this drastically extends the life of the boot (in our experience). Visit Alpinestars’ website for all the details here.

This is the boot champions Ryan Dungey and Ken Roczen wear, so you know it’s legit. It’s touted as one of, if not the most comfortable riding boots, but it’s also highly durable and packed with protective features. The Instinct boots have a patent pending hinge and buckle system that provides lateral support and locks out to stop motion before hyperextension, and the boot’s easy buckle system flexes fluidly for ease of movement and bike control. The Instinct has a slim construction and a proprietary Duratac burn guard compound on the inside of the boot that provides solid grip and durability. The Instinct boot also comes in an off-road variant featuring a sole with more aggressive tread. Visit Fox’s website here for more info.

The SG-12 is Gaerne’s (pronounced Gar-nay) premier off-road boot. It’s a more traditional-type boot like the Tech 8 with its sewn-on sole, but the SG-12 is densely packed with protective and performance features. The SG-12 is considered to be on the stiffer side of the spectrum, but don’t think that’s a bad thing. The way the boot works, you’ll barely even notice. We’ve been riding in the SG-12s for years now, as well as Tech 10s, which aren’t as stiff in comparison, and the Gaernes allow the rider full, unobstructed control of the motorcycle and its controls. They flex where they need to and don’t where they shouldn’t. The SG-12s feature a proprietary Dual Stage Pivot System, in which the first pivot is attached to the “razorback,” which provides a rigid component and offers strong lateral support while a glide plate keeps the upper portion in a firm, upright position. There are four lightweight alloy buckles that attach to an adjustable strap, and this system is our favorite and easiest to use on the market. The inner side of the boot has a “grip guard” to help you, well, grip the bike, and it acts as a heat resistant pad protecting your leg from the exhaust too. For more information with all the details, check out Gaerne’s website here.

The Crossfire 3 is the most serviceable dirtbike riding boot on the market. No other model even comes close. You can order just about any part of the boot if it fails or needs replacing – a task accomplished with simple tools. The design uses hardware instead of stitching so virtually every part is replaceable, season after season. The Crossfire 3 is also an incredibly versatile boot in terms of adjustability to better fit a wider range of riders.

The boots also feature a Dual Flex system which not only limits lateral hyperflexion, but also features hard stops at the limit of the anatomically allowed range of motion that limit hyperextension of the ankle joint. The adjustability of the Dual Flex system enables the Crossfire 3 SRS boots to provide each rider with a personal fit no matter their body shape or whether or not knee braces are used (which we couldn’t ride without, once you ride with knee braces, you won’t want to go back). The Crossfire boot is the top choice of many off-road and enduro guys thanks to its slim profile and freer range of motion, but they do run on the slimmer side of the foot width spectrum.

The Crossfire 3 also comes in the “TA” variant, for riders who prefer the feel of a sewn-on sole, compared to the molded sole of the SRS. The Crossfire 3 TA is identical in features to the Crossfire 3 SRS Boot with the exception of the sole. The TA sole is suited for riders who find they walk in their boots a bit more, and whose sole is made of anti-skid rubber that can be replaced by a cobbler. This is just a small glimpse of what the Crossfire 3s offer, for the full breakdown head to Sidi’s website here. 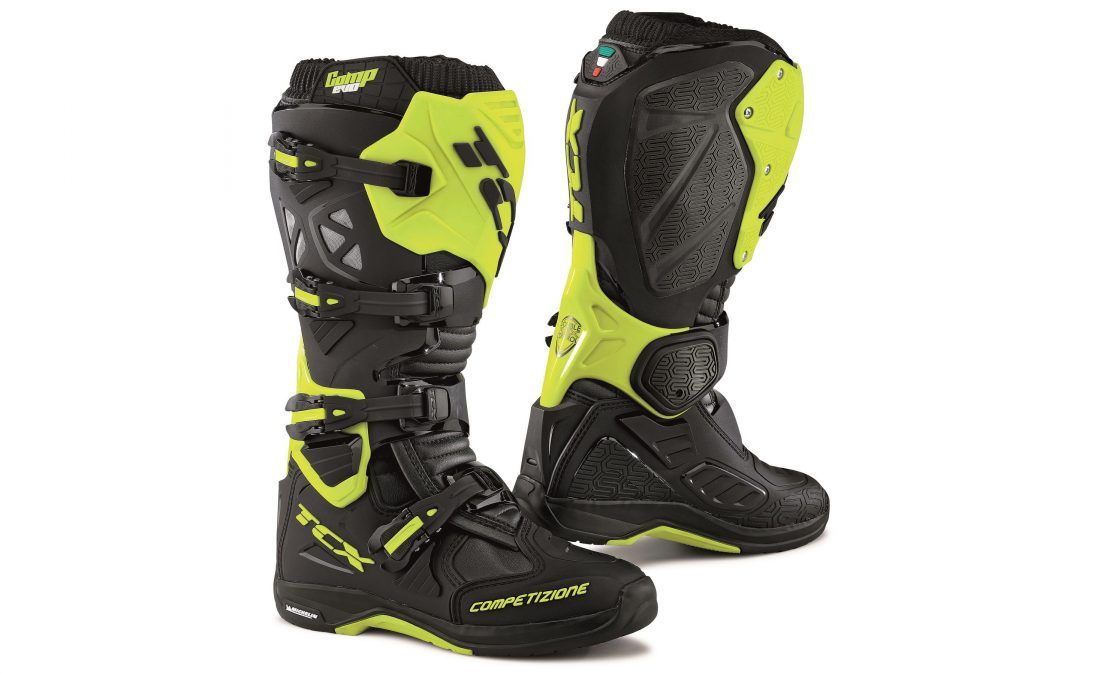 TCX is yet another Italian motorcycle boot company, and their premier boot is the Comp Evo 2 Michelin. It’s widely popular in Europe, less so here in America, but it’s a great boot nonetheless. Similar to Sidi and Gaerne, TCX’s Double Flex Control system provides flex while protecting against hyper-extension and offers a full range of motion of up to 18 degrees forwards and 15 degrees backward. The Michelin model sole uses special proprietary Michelin rubber, which claims to be more durable and wear resistant. Find out more at the TCX website
here.

At the end of the day, any dirtbike riding boot is going to be better than a non-motorcycle specific boot. But we definitely suggest leaving as much room as you can in the budget for a high-quality boot. A $500-600 dollar pair of boots might sound expensive now, but that cost won’t be anything compared to a potential hospital bill. A more expensive boot offers more protection and better durability. You get what you pay for, plain and simple.

Now be safe and go out and have some fun!