American Beta has released more information on the two RR enduro models that it released photos of two days ago. The Italian company, which started as a bicycle manufacturer and is celebrating its 110th anniversary this year, will offer a total of six off-road models for 2014. 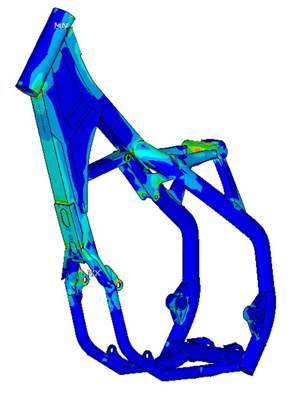 Just as we suspected, the changes made to the 250 RR and 300 RR two-strokes are centered on chassis and suspension refinement, as the two-stroke models received all-new engines in 2013. Beta has released a diagram showing the differences in the 2014 chassis. According to the company, the frame areas that are in light blue or yellow in the diagram are the heaviest impacted under extreme conditions. These areas are normally red in color under heavy impacts, but Beta’s engineers have reduced all the areas to a yellow or light blue. Furthermore, Beta has updated the frame on the two-stroke models by reducing stress to the heavier weighted areas. Beta engineers say the adjustments account for roughly a 20% reduction of stress to the frame, which ultimately translates to less feedback to the rider, making the bike easier to ride and control.

The biggest suspension changes have been made to the Beta’s Marzocchi inverted cartridge fork, which now has a smaller inner cartridge as well as updated compression and rebound pistons to improve the oil flow. Beta also revised the valving for improvement over square-edge hits and updated the top fork cap to make spring changes easier. The two-stroke models also get a reshaped rebound adjuster on the shock to allow for more precise suspension tuning, and the shock also gets updates to the valving as well as a new 5.2 kg rear spring.

Fuel tank capacity has been increased from 2.0 gallons to 2.5 gallons for increased range, and the tank is also light in color so that it’s easier to monitor the fuel level. Other changes for 2014 include a new front fender that provides better rider protection and a redesigned seat base for a better fit to the frame and to provide a more comfortable ride.

Other minor updates to the two-strokes include a new oil check plug for the clutch cover, making it easier to check the clutch and transmission oil. The 250 RR also gets a new power valve mechanism in an effort to improve low-end performance and smooth the bottom-to-top transition in the powerband. New brake disks are claimed to offer better stopping power thanks and greater durability thanks to an improved heat treatment process.

As with its two-strokes, Beta made a few changes to the existing four-stroke engine design for 2014. All four-stroke models will utilize a new countershaft that features a new heat-treating process and more durable bearings. The transmission shift drum has also been modified to improve shifting. Lastly, 350 RR (only) gets a new piston with an updated profile and additional lubrication holes to increase reliability.