Kawasaki’s 50th Anniversary continues with a retrospective on the Centurion G31M, a screaming 99cc two-stroke that was the father of the KX85 and KX100.

Irvine, California (May 6, 2016)– Man had just landed on the moon, the film Easy Rider, (1969) premiered, and the Woodstock Music Festival had just occurred. It was a remarkable time in the USA. Then came the 1970 Kawasaki 100 Centurion G31M, 99cc of rotary-valve two-stroke dynamite wrapped in Lime Green racing paint. Before the advent of KX motocross bikes, the Centurion quickly developed a fierce reputation as a scrambler and dirt-track racer. No wonder: Priced at $560 and weighing just 178 pounds dry, the Centurion was offered as a beginner’s bike–but its performance was simply rabid, as anyone who rode one or even just heard the raspy exhaust note from the expansion chamber could attest.

As was typical for dirt bikes of the day, the Centurion featured a conventional fork with just five inches of travel and twin rear shocks with even less. The chassis used a double-cradle steel frame, small-diameter drum brakes, and 3.25-18 Dunlop K70 tires. But it was the chrome-bore engine’s amazing output that would most enhance Kawasaki’s growing image as a high-performance company, for each Centurion came with a handlebar tag citing the power output of that particular engine. It also came with racing number plates, engine spares, carburetor jets and gearing. Race ready, indeed!

From the 1966 Samurai A1 to the 1967 Avenger A7, and from the powerful 1968 F21M scrambler to the 1969 500 Mach III H1, each year Kawasaki had rolled out an incredible performance benchmark that sent shock waves through the industry. And the 1970 Centurion G31M was one of them, inviting young riders to compete in a wide range of dirt events on a bike designed for the task, rather than just converted trail bikes. For promotional purposes, Kawasaki even gave Steve McQueen six new Centurions while the actor was filming his epic movie Le Mans (1971). 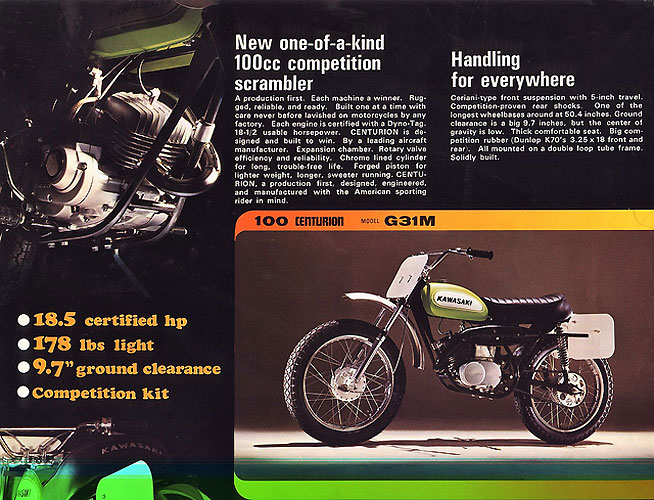 With over 4,000 units produced during 1970-71, the Centurion was plentiful enough in its time but is surprisingly rare now, and as such is much appreciated by collectors. Guaranteeing that the Centurion will never slip into obscurity within Kawasaki’s heritage, its DNA lives on in the 2016 KX100 motocross motorcycle , an amazing 46 years after the Centurion’s introduction created a new youth market. With the Centurion as part of its history and the launch of the Team Green™ racing team in 1981, the path for Kawasaki and young racers was indelibly set.