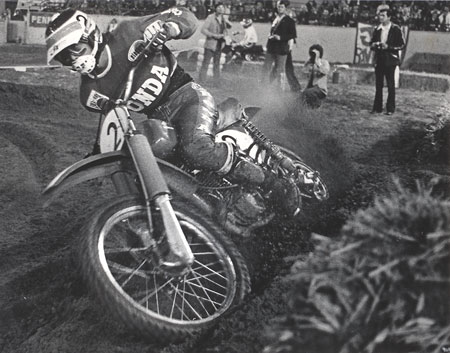 AMA Hall of Famer and the first ever AMA 125cc National Motocross Champion Marty Smith and his wife, Nancy, have died in a dune buggy accident.

The Smiths were riding in the Imperial Sand Dunes Recreation Area (a.k.a. the Glamis Dunes) when the dune buggy they were driving rolled over.

In a Facebook post, former motocross racer Lee Ramage said he and his wife Tammi were riding in the buggy with the Smiths when the accident happened. Ramage says he and his wife were unhurt and attended their friends, waiting for first responders to arrive.

Smith won all of his championships with Honda, and was a fixture in the company’s advertising with his trademark long flowing hair. In 1980, Smith began riding with Suzuki, retiring after the 1981 season.

The San Diego native was inducted into the AMA Hall of Fame in 2000. You can read more about his life on the Hall of Fame’s website.

Marty and Nancy Smith are survived by their three children, Jillyin, Brooke and Tyler.