Even when he is sick, Robby Bell is a top-10 finisher at the Glen Helen Big 6 Grand Prix.

My aspirations coming into the AMA District 37/MSR Big 6 Grand Prix at Glen Helen Raceway took a massive hit when I woke up Friday morning with a 100-degree fever and all the other symptoms that come along with a virus. I still had hopes that I would feel good enough come Saturday afternoon to push up front, but realistically I just wanted to get a decent result and stay close in the championship. Luckily, the track and weather conditions were absolutely perfect—hardly any dust, and very cool temperatures—which would help my body make it through without being taxed any more than it would need to be.

When the gate dropped, I believe I counted to six before releasing the clutch and accelerating over the starting line. Okay, that’s a bit of a tall tale, but I seriously don’t think I’ve ever reacted as slowly to a falling gate as I did in the Pro race. Fortunately for me, the pack didn’t really close in ahead of me and I was able to accelerate up to around 10th place through the first couple corners.

I went back and forth with Michael Sleeter and Michael Del Fante early on, finalizing those passes, and making a couple more, which put me into sixth place behind Eric Yorba. A little past half a lap into the race the course sped down an asphalt straight before taking a hard, right-hand turn down into a wash, which would come up rather quickly. I really pushed Eric down the straight in the hopes that he would blow past the corner and my plan seemed to work perfectly—aside from the fact that I nearly blew the corner right behind Eric—as I moved into fifth.

About a lap later I had caught up to Jake Hogan, who was running fourth, and after trying repeatedly to set him up through a number of corners, I held a higher line and held more momentum around his outside, taking the spot away. The next rider up the track was Justin Jones, though he and the two leaders had pulled a healthy gap on me, and on the next lap that gap was to become even bigger. 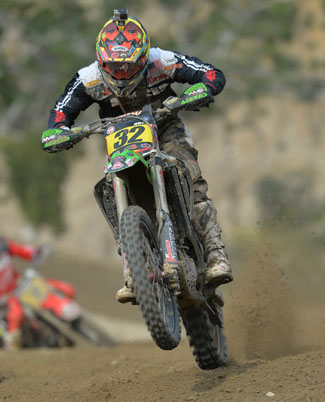 I came around to the log pit of the endurocross section on lap three to quite a bit of confusion: The section had been causing all kinds of chaos already and there were a couple lapped riders stuck in there just before I came to it. One of the officials was waving me to go around the log pit, like they were going to close it down, while another was telling me to go through it. After doing a quadruple-take, looking back and forth between the two officials to see if they’d come to an agreement on which way to send me, I ended up going into the log pit with next to no momentum, which inevitably led to a very poor run through the section. While I was struggling, I look over to my left to see that Colton Udall and Eric Yorba had been sent around the pit behind me, which gave them the easiest of passes, and dropped me back to sixth.

Needless to say, I was a bit heated about the situation; actually I was downright enraged in the moment, and I went charging back after Eric once more. As the course turned down Mt. St. Helens I held the throttle locked down the descent, maintaining more momentum than Eric, and moving back into fifth. I was still riding off of the adrenaline and anger, which carried me right up to the back of Colton. I rode ballistic for the next half a lap or so trying to get back by Colton, but to no avail, so I began to settle in just behind him. That’s when I started to feel the weight of all of the exertions; up to this point in the race I had actually felt pretty strong on the bike, but expending all of the energy I did over the last lap since the log-pit debacle finally began to tell. I started to fade away from Colton’s rear wheel.

Over the following laps I could feel myself getting weaker and weaker on the bike, suffering a couple minor falls as well (which didn’t help matters much), and as the laps began to wind down, I could see I was being caught from behind by some other riders. First to catch me was Jeff Loop, and I didn’t even fight him. There was still more than a lap to go and I just didn’t have the energy left to give for that long of a battle, so I pulled over and gave him the position.

The white flag came out at the end of that lap and I could see Eric Yorba and Blayne Thompson reeling me in as well. I tried for a few straightaways and corners to pick up the pace, but I was found wanting for both speed and energy, and the two riders made their way by in quick succession. I would lose one more spot on the final lap, as my teammate Justin Seeds was charging after suffering some issues early in the race, and I didn’t put up too much of a fight for that position either. I was absolutely relieved to see the checkered flag waving at the end of the lap, and I crossed the line to take ninth place on the day.

I have some mixed emotions as I reflect on the event. At one point in the race I was ahead of a couple riders I’m close to in the championship, so to end up losing positions—and points—to them hurts, but I was happy with the effort I put in: I went as hard as I could for as long as I could, and was still able to hang on to a decent finish. Thank you to my mechanic Phil, suspension tech John, my wife (and our little bean), family, and all of my personal supporters: Precision Concepts, MSR, Shoei, Sidi, 100%, EVS, USWE, Focus apparel, BRP, RAD custom graphics, GoPro, A’ME grips, IWC motorsports, ATP mechanix, Rekluse, CryoHeat, and the MotoXerciser.

I want to make a quick comment on the log-pit fiasco. I was unhappy, especially in the moment, about losing a couple spots when the riders behind were sent around the section, but it was just a racing incident. The log section was causing all kinds of problems for the backmarkers, and had already been closed down once, but the Prairie Dogs crew were trying to re-open it for the pros to hit once more. That being the case, I believe the three riders ahead of me at the time hit the section, so I understand the desire for me to go through it, and once I had trouble in the section (including a couple lappers around me), I understand the need to close it down to keep the race flow going, so I was just on the wrong end of the decision. Looking back, I think it was just a bit ambitious to think the log pit would remain rideable in a race with so many entries, and such a disparity between classes, but having said all of that, I felt the Prairie Dogs did a fantastic job with the event, implementing quite a few positive changes to the grand prix program and laying out the best-designed pit row that I’ve experienced at a Big 6 race.

From here I’m going to be focused on getting back to full health and coming out swinging at Lake Havasu WORCS. I love that event, and if it truly is the final grand prix at Havasu, getting a great result would sure be a good way to remember it.