The following is from Feld Entertainment regarding the 2017 Atlanta Supercross:

Rockstar Energy Husqvarna Factory Racing’s Zach Osborne finally slapped the monkey off his back at the Atlanta Supercross by earning his first career AMA Supercross win during round two of the Monster Energy AMA 250SX East Supercross Series inside the Georgia Dome Saturday night.

It has been a long time coming for the talented Osborne, who has struggled with injury and watched as many of his contemporaries have gone on to compete in the 450cc ranks, but it all came good for Osborne in the Atlanta 250SX East main event.

Troy Lee Designs/Red Bull/KTM’s Jordon Smith grabbed the SupercrossLive.com Holeshot to start the Eastern Regional 250SX Class Main Event, edging out Yamalube/Star Racing Yamaha’s Dylan Ferrandis. Behind them, Smith’s Troy Lee Designs/Red Bull/KTM teammate Alex Martin and Osborne battled for third. Ferrandis then crashed out of second, handing the spot to Martin, while Osborne slotted into third. Entering points leader and last week’s winner Joey Savatgy found himself outside the top 10 in 11th aboard his Monster Energy/Pro Circuit/Kawasaki, eventually fighting his way into eight by the completion of the opening lap.

With Smith holding a comfortable lead out front, Osborne went to work on Martin and closed in heavily at the completion of lap two. After hounding the rear fender of his KTM rival for several corners he made the pass stick on lap three and set his sights on the lead. Just a lap later Osborne closed in onto Smith’s rear fender as they completed lap four. He dove inside, heading back onto the start straight and easily took over the lead, quickly opening a gap. As Osborne continued to pull away, the KTM teammates of Smith and Martin engaged in battle for second, with Martin getting the upper hand on lap 10 after Smith bobbled in the whoops.

The battle between the teammates wasn’t over yet, however, as Smith was able to mount a challenge of his own to get back by. They fought side-by-side on lap 15 and made contact, which sent Smith to the ground. Martin continued in second, while Yamalube/Star Racing Yamaha’s Colt Nichols moved up into third, with Savatgy jumping into fourth and Smith remounting in fifth.

Osborne went unchallenged over the remainder of the main event and easily took the win 6.3 seconds ahead of Martin, who posted a career-best result in second in just his third trip to the podium. Nichols grabbed his second career podium result in third, while Savatgy salvaged a fourth-place finish to keep things close in the points.

“I can’t explain [the feeling],” Osborne said. “It hits home. I’ve worked so hard for this and there are hundreds of people that helped get me to this point. Tonight was my night. I felt like I missed out on one [a win] last weekend. After I got a good start I felt like it was my turn to just get in there and make it happen. I got into the lead about halfway and it was easy from there.”

Osborne not only won the race, he surpassed Savatgy atop the Monster Energy AMA 250SX East Supercross Series poinys standings and now holds a slim two-point lead over his Kawasaki rival. Smith dropped to third, seven points out of the lead.

The 2017 Monster Energy Supercross season continues next Saturday, March 4, with the championship’s lone visit outside the U.S. The ninth round will commence from Canada’s largest city of Toronto, inside the Rogers Centre. Broadcast coverage can be seen via tape delay on FS1 at 7 p.m. PT / 10 p.m. ET. 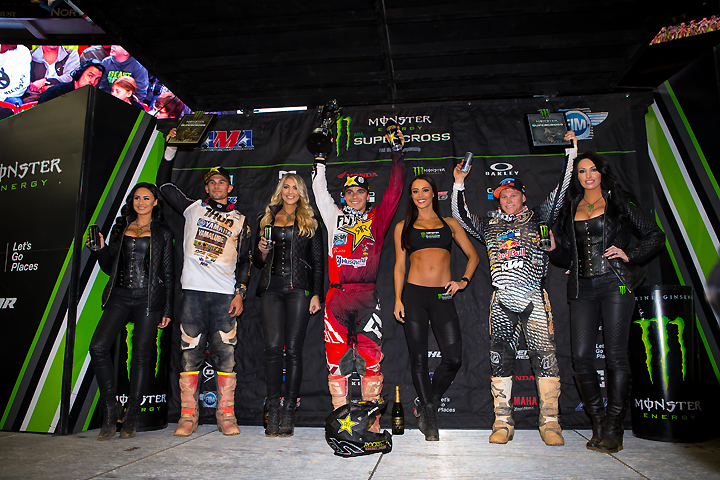