We swing a leg over Kawasaki’s revised and improved 2017 KX450F. Is it the best in the 450cc motocross class?

Kawasaki’s much-anticipated new version of its mighty KX450F broke cover in 2016, and in some areas the slim and trick-looking “Green machine” broke some new ground in the class.

For 2017 the slim and trim KX450F returns with small refinements that add up to help the bike move even closer to its potential by addressing some issues that may have hindered it from becoming a class dominator in 2016. To prove it, Kawasaki invited us to sample the 2017 model at Milestone MX Park in Riverside, California, where the track was set up in its “outdoor national” configuration, which produces long lap times. We enlisted Southern California off-road and motocross ace Ryan Abbatoye to brave the Disneyland-style crowd on this open track day and assist us with feedback. 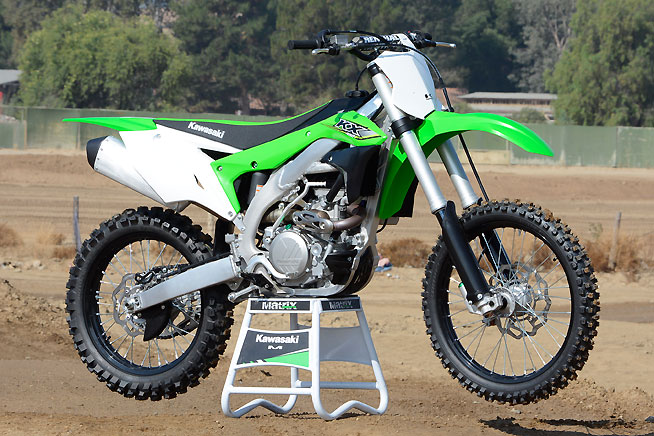 If there was a hitch and the 2016 KX450F’s giddy-up, it was definitely in the suspension performance. After developing a reputation for being on the stiff side, Kawasaki revamped the KX450F’s suspension at both ends in 2016, but it may have gone a little too far. The 2016 model had a tendency to blow through its suspension travel too quickly, leading to bottoming on big hits, such as when landing from sky-shot jumps or pounding through large whoops. For 2017, Kawasaki has attempted to address the issue at both ends with revised Showa suspension components.

Up front, a new, more-rigid aluminum triple clamp holds the 450F’s KX’s 49mm Showa Separate Function Fork, Triple Air Chamber (SFF-TAC), which has been updated in a couple of significant ways: First, the inner and outer air chamber filler valves that are located on top of the right fork cap have been swapped. Kawasaki officials wanted us to make that very clear! Second, the fork has been re-valved to provide better control and bottoming resistance. The left fork leg still offers 22 positions of compression damping adjustment and 20 positions of rebound damping adjustment while the three air chambers in the right fork leg control the spring rate and ride height via the accessory 0-300 psi digital air pump that comes with the bike.

Out back, Kawasaki has revised the KX’s Uni-Trak rear suspension linkage ratio yet again and fitted the bike with a redesigned aluminum swingarm to give the linkage a little more space in which to operate. The KX’s Showa piggyback reservoir shock also features new valving for a firmer ride while retaining 19 positions of low-speed compression damping, four turns of high-speed compression damping and 19 positions of rebound damping. The 2017 also gets a new, lighter spring although its 52 Newton-meter spring rate remains unchanged.

On the track, these changes weren’t readily apparent at first. That’s because it took some time to dial-in the fork.

“When I first went out with the stock settings, the forks were riding a little bit low in the stroke, and that was causing a little bit of kicking in the rear end,” Abbatoye said. “So we slowed down the rebound on the shock by three clicks and added two clicks of compression. Then we took some air out of the bottom chamber in the fork, which made the ride height a little taller. We also softened the compression on the fork by two clicks. Those changes made the front end work a lot better and made the bike feel a lot more balanced. Where last year’s bike felt soft and wallowing, both ends feels a lot more solid this year. It doesn’t want to blow through the travel like it did last year, and it doesn’t want to bottom. The bike feels a lot more balanced front to back. Kawasaki definitely took a step in the right direction with the suspension specs.”

The improved suspension definitely helps the rider to better use the KX450F’s abundant power delivery, which has been refined for 2017 via a new ECU intended to give the engine a more robust feel and reduce its tendency to pop on deceleration. New from the cases up last year, the KX’s compact, 449cc, fuel-injected, DOHC single features the same 96 x 62.1mm bore and stroke and 12.8:1 compression ratio. It also sports the same cylinder head, bridged-box piston and cam specs as the 2016 model, and its cylinder is offset 8.5mm on the cases to help reduce drag on the cylinder wall.

Abbatoye was impressed with the 2016 KX450F’s engine performance, and after burning several laps on the Milestone track, his opinion is unchanged. Throttle response through the Kawi’s DFI fuel-injection, which uses a 43mm Keihin throttle body, is crisp and precise, helping the brawny engine to hurl enough roost to blot out the sun. 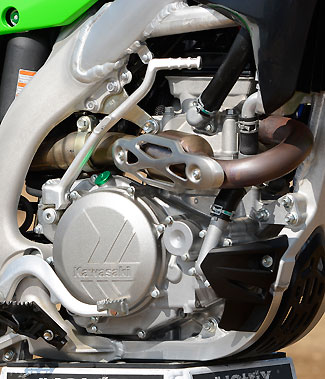 “Mid-range power is still the KX450F’s strength,” Abbatoye said. “Last year the 2016 could be a little sluggish off the bottom, but I think the 2017 gets going a little easier. Milestone isn’t the kind of track where you can rev a bike out, so it was harder to tell if the top-end has improved, but it’s definitely still a mid-range motor, and I like that because it is really easy to ride—and it is one of the more powerful 450s out there right now. It’s very user-friendly. It isn’t an arm stretcher like some of the bikes in the class. You can come out of a corner in third gear and just blip the throttle, and it will clear the next obstacle easily.”

And the KX450F’s ECU still offers a lot of adjustability. The ECU’s ignition mapping can also be changed by swapping out different DFI couplers to suit the booming motor to match track conditions and/or riding style. The engine ECU can also be remapped by hooking up Kawasaki’s accessory handheld KX FI Calibration Kit, which can store up to seven preset maps. It also boasts Kawasaki’s class-revolutionizing Launch Control feature, which is proven to help riders clear the starting line quicker. Not all of Kawasaki’s competition have adopted Launch Control technology yet, but the switch is on.

The 2016 KX450F’s completely redesigned chassis offered much improved handling over previous versions, and the 2017’s is even slightly better than its predecessor, thanks partially to the aforementioned new, more rigid triple clamp. Reportedly modeled after the unit used on Kawasaki’s factory race bikes, it is mated to the latest version of Kawasaki’s aluminum perimeter chassis, which features a mix of cast and forged sections to produce a compact framework that’s 1 lb. lighter and 6mm slimmer than the previous generation. Riding on a 58.9-inch wheelbase with a 28.2° rake and 5.0 inches of trail, the Kawasaki retains the high-speed stability that made the KX famous in rough terrain, but now it steers more precisely than ever.

“I think that the biggest difference between the 2016 KX450F and the 2017 KX450F is that the 2017 has a lot more of a rigid feel—and that’s a good thing,” Abbatoye said. “Past-generation KX450Fs have had a reputation for being stable but not cornering as well as some of their competition, but I think Kawasaki has changed that with this generation. It’s still stable, but now it corners really well. It tracks through ruts easily, and it is more than willing to turn-in. It also has pretty good-feeling front-end traction in flat turns. It still isn’t the most maneuverable bike on the track, but its overall cornering ability is excellent. And it feels so stable at speed that I still want to try one that is set up for the desert!” 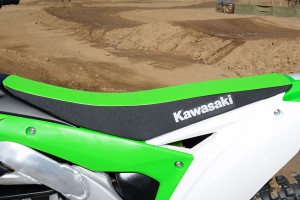 Slim, compact and comfy ergos are also part of the KX450F package, and the 2017 gets a new seat with a better reinforced base, something Kawasaki elected to add after feedback from its race teams that the previous seat wouldn’t hold up to repeated aggressive “seat bouncing” over jumps. During the 2016 redesign, Kawasaki engineers came up with the brilliant idea to design the KX’s radiators with more of a V-shape, allowing them to be tuck-in to the chassis even more and covered with slimmer and narrower radiator shrouds. This change alone makes the KX450F dramatically skinnier through the middle, and it is noticeable on the track, as you don’t have to worry about catching about on the radiator shrouds. We noted in our 2016 KX450F review that shorter riders will appreciate the design since the chassis’ 37.4-inch seat height perches the rider rather high. The good news is that the chassis offers a high degree of adjustability, featuring footpegs that can be lowered 5mm to give taller riders more leg room. The 450F’s handlebar clamps also offer a total of 35mm of adjustment to better tailor the ergos to rider preference.

“It’s really comfortable to ride,” Abbatoye said. “Kawasaki KX450Fs have historically felt long and wide, but, just like last year, this one doesn’t. It feels really narrow, and the bars and pegs just fell into place for me.”

There’s no mistaking a Kawasaki at the track, and for 2017 the KX450F’s signature Lime Green, a hue that has come to define Kawasaki factory-backed racing around the globe, is offset by new in-mold graphics that are impregnated into the KX’s radiator shrouds. Since the graphics cannot peel, they are practically guaranteed to help the KX look factory fresh for a longer period of time.

No bike is perfect, though, and we did have one minor gripe with 2017 KX450F: The Kawasaki’s 270mm front disc and Nissin two-piston caliper delivers plenty of stopping power, but Abbatoye noted that the front brake feels a little spongy at the lever, something he has experienced with Kawasakis in the past. Out back, however, the KX’s 240mm rear disc and Nissin single-piston caliper had no such issue. The rear brake offers plenty of power and a linear feel.

That nitpick aside, the bottom line here is that Kawasaki has worked to eliminate some of the bugs found in the 2016 KX450F for the 2017 model year, and we think they’ve done pretty good job.

“As an out-of-the-box bike to take to the track, it is definitely something that you can work with and turn it into a pretty awesome ride,” Abbatoye said. “You have to fiddle with the suspension a little to get it right, but it’s worth the effort.” 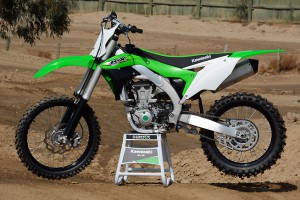