The 2017 Honda CRF450R has, without a doubt, been the most anticipated motocross model of the year for a couple reasons.

First, Honda threw the industry a bit of head fake when it applied for patents to technology centered in a double overhead cam engine, presumably the same engine that Honda works rider Akira Narita was testing in the All Japan MX National Championship. Then, production of the CRF450R was delayed when a massive earthquake damaged Honda’s production facilities in Kumamoto last April. Eventually, photos of the production CRF450 were leaked, showing a machine powered by an all-new version of Honda’s Unicam engine, a feature that was confirmed when Honda officially unveiled the 2017 CRF450R in August. Lastly, early rumors that Honda was doing away with the disastrous KYB PSF air fork were also true. The 2017 model would get a new 49mm Showa coilspring fork that was of the same spec as Honda’s factory A-kit suspension. To say that we were excited to climb aboard the 2017 CRF450R is a major understatement.

Finally, Honda hosted the American introduction of the 2017 CRF450R this past week at the amazing Monster Mountain MX Park just outside Montgomery, Alabama. After spending a full day, including over 80 laps on the CRF, we can absolutely confirm that Honda has a serious contender for top honors in the 450cc MX class. It was definitely worth the wait!

The first thing you notice when climbing aboard the 2017 CRF450R is how much smaller and narrower it feels than the 2016 model, and we could make the real-time direct comparison because Honda had a 2016 model on hand for us to evaluate at Monster Mountain as well. Honda says that the weight of the 2017 model is identical to the 2016, but get rolling aboard the ’17 and it feels much lighter than the previous version. Despite raising the CRF’s airbox and intake tract to create a downdraft intake layout that gives the incoming air charge a straighter shot to the CRF450R’s intake valves, the overall center of gravity is lower on the 2017 than the 2016. Honda developed an all-new, lighter chassis that features longer main spars that are thicker near the steering head but thinner and more gradual as they move down toward the swingarm pivot. The goal here was to decrease torsional stiffness for better bump absorption and rider feedback. But lateral stiffness is unchanged, and that’s a good thing because the previous CRF450R was already praised for its excellent handling character. The new chassis also features a new lighter subframe with with extruded gussets for lighter weight, and it also places the shock lower in the chassis to clear the intake tract while not sacrificing suspension travel.

The next thing you notice is that the CRF450R can be difficult to start if you don’t know what you’re doing, leading you to believe that the fuel injection is to lean at low rpm. It’s an illusion. The CRF450R is painfully easy to start. The trick is not to give the kickstarter a healthy boot. All it takes is a lazy shove through the kickstarter’s arc to bring the CRF to life. Kick it hard, and you’ll be kicking it a long time. Kick it gently, and you’ll be on your way in one to two kicks max. A few other things: The CRF450R sounds as if it idles higher than other bikes in its class; Honda officials tell us the idle is set at 2000 rpm. It also has a sharper exhaust note through its new, more compact dual-muffler exhaust system. Honda engineers found more power by fitting an exhaust system with more gradual bends than before, and they also fitted 78mm shorter mufflers to help centralize the bike’s mass.

Once underway, the CRF leaves no doubt as to its aspirations of being the class champ in the power department. The new liquid-cooled Unicam engine may share the same 96.0mm bore and 62.1mm stroke as the old one, but the CRF’s one-point higher compression ratio (now 13.5:1), new intake system and more radical cam—the latter made possible by the inclusion of a finger follower that allowed Honda engineers to install a higher-lift camshaft—give the CRF a lot more bark and a lot more bite.

If you read our 2016 Honda CRF450R review, you’ll note that we enjoyed the old engine’s power delivery even though it was more beauty than beast. After riding the ’17, we guarantee that’s no longer the case. When ridden in Mode 3, the most aggressive map of its three Engine Mode Select settings, the new engine rips with extreme force, so much so that first and second gears in its slick-shifting five-speed transmission are almost unnecessary. In third gear, the CRF will rocket out of corners with authority, delivering astonishing grunt down low and pulling hard all the way to its rev limiter, and you don’t even really have to slip its feathery feeling clutch to get going. Part of this harder-hitting feel may be due to the fact that the 2017 CRF450R is equipped with a 50-tooth rear sprocket as opposed to the 48-tooth rear found on the 2016 model, but Honda claims that the new engine delivers 5 more horsepower at its peak as well, and we can’t argue with that because it does feel much stronger through all the gears. We can’t wait to get the ’17 model on the dyno to see what kind of torque curve it has. On the track it felt as broad as the beautiful blue Alabama sky we rode under at Monster Mountain during our test day. We’re talking serious, arm-jerking, pro-level power here!

Fortunately, the power can be muted by selecting the stock map. Vet riders and Open-class newbs may be even happier with Mode 2, which alters the fueling and ignition maps to give the CRF a tamer, more controllable feel for low-traction surfaces. If that’s still too much, Modes 2 and 3 are customizable via Honda’s HRC accessory tuning software. Regardless, of what mode you are in, though, throttle response through the CRF’s 46mm Keihin throttle body is clean and crisp. There’s little question in our minds that the 2017 CRF450R engine is in the running for 450cc MX Motor of the Year honors.

Less surprising is the CRF’s all-new chassis. Last year, Honda made a couple minor tweaks that helped to make the CRF450R feel quicker than it was. The 2017 CRF450R chassis, which is actually the sixth-generation chassis to appear in the five generations of the model, retains the same predictable handling with even better turning manners while actually feeling smaller, lighter and narrower than the previous version. AMA District 37 off-road rider Nic Garvin raved about how well the 2017 CRF450R corners. At Monster Mountain, the new chassis cornered as if it was magnetized to the track. Possessing a feathery steering feel and excellent front end traction in flat corners, the CRF can make lightning-quick direction changes, but it also tracks extremely well. Some of the cornering ruts on the track were deep and unyielding, yet the Honda railed through them in slot car fashion.

One thing that hasn’t changed is that CRF chassis will still shake its head at high speed over rough ground, but the good news is that it is easily cured by lowering the fork 5mm in the triple clamp. With that simple change, the headshake was gone, giving the front end much more control in braking bumps without sacrificing the bike’s “turn-on-a-dime” feel. Garvin noted how forgiving the chassis is in the event that the front end slips off line or the rear end fishtails due to his heavy throttle hand. The ’17 is very easy to get right back into line, increasing rider confidence in a big, big way. It’s all the more surprising when you realize that the 2017 model features a shorter albeit stiffer swingarm that helps to cut the wheelbase by half an inch, down to 53.3 inches.

Part of that narrow profile is due to the CRF450R’s new radiators, which are slimmer (but longer), allowing new radiator shrouds that tuck in much tighter than before, eliminating our biggest complaint about the previous model. Hallelujah! No more snagged boots or knee guards when cornering!

To make sure the narrower radiators can pull-in enough air, the CRF450R also features a narrower front fender and a number plate with less frontal area, allowing air to stream between the lower edges of the plate and the fork legs to help keep things cool. And since oil is a coolant as well as a lubricant, and internally, the CRF450R’s oil jet system has also been revised for better cooling. The new system features four holes rather than two to keep help cool the piston, and a new dual-stage scavenge pump has been fitted to reduce pumping losses for greater efficiency, according to Honda. That helps the CRF450R to run cool despite carrying about 260cc less oil volume.

Oh yeah, and about those new 49mm Showa coilspring forks: We love ‘em. In fact, the 2017 CRF450R’s suspension package is first rate all the way. In stock form, our fork was a little on the soft side, but we increased the compression damping to keep the fork from settling too far into its stroke. Out back, we set up the Showa piggyback shock with 108mm of sag and dialed two clicks out of the high-speed compression damping circuit to give make it more compliant over rough ground. As the track got even rougher, we took two more clicks out of the high-speed compression. The suspension at both ends is extremely plush without feeling mushy or uncontrolled, delivering 12 inches up front and 12.4 inches out back. Garvin attacked every jump on the track and enjoyed hammering through the sand whoop section in full confidence that the fork and shock would deliver a smooth ride without kicking or bottoming.

If there is an area that we would like to see improved, it’s in the braking department. The CRF450R’s 260mm front and 240mm rear disc—both of them clamped by Nissin calipers—deliver decent stopping mixed with a nice feel, but we like a little more power than the stock setup has to offer. The 2017 may be a prime candidate for more aggressive pads and/or an oversized front rotor to increase the whoa power.

Other nifty new details for the CRF450R include a titanium fuel tank to shave weight from the overall package and compensate for the higher intake tract. It ups the cool factor, but the downside is a .1 gallon reduction in fuel capacity. For 2017, the CRF450R also gets Dunlop’s choice GEOMAX MX3S tires front and rear. If you can find tires with more grip and a better feel on a stock motorcycle, let us know. The CRF also gets “film-insert” (aka in-mold) graphics to keep the bike looking fresh for a longer amount of time. The new CRF also integrates the kill switch into the Engine Mode Select button on the left handlebar.

Even though it was just one day, we couldn’t help but be impressed with the performance improvements that Honda has made in the CRF450R. Its newfound power, brilliant chassis and hassle-free coilspring fork are welcome changes that put it way ahead of the 2016 CRF450R, although whether it has enough of the good stuff to jump to the top of the 450cc class remains to be seen.

Our only regret is that our time with the Honda was all too brief. The 2017 CRF450R is one speed date we’d love to go on again. 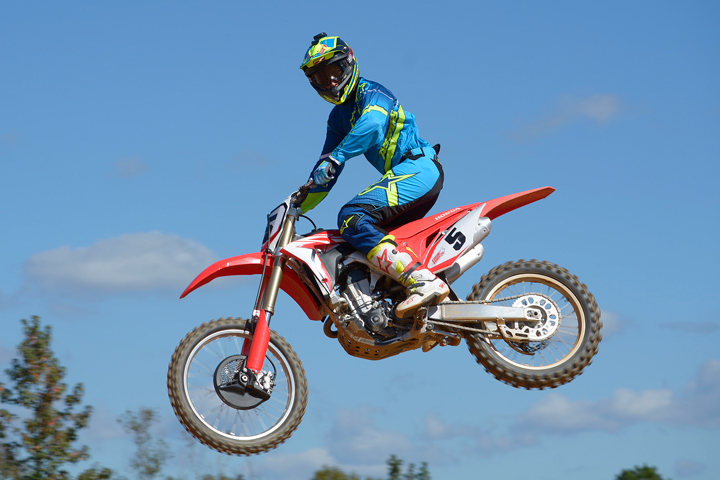 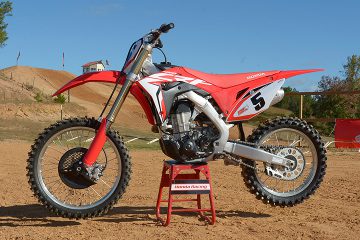 *Includes all standard equipment, required fluids and full tank of fuel—ready to ride