You could make the argument that KTM is more aggressive than its Japanese competition when it comes to development of its motocross models.

This swift development program has definitely helped the 2017 KTM SX-F move up the ladder in the 250cc class—not that it had that many rungs to go before reaching the top anyway. The 2017 KTM SX-F is an impressive machine with an all-new engine that makes a lot of power, handles well and features a substantial improvement in the form of its WP AER 48 air fork. In the right hands, it’s a devastatingly fast 250cc motocrosser. 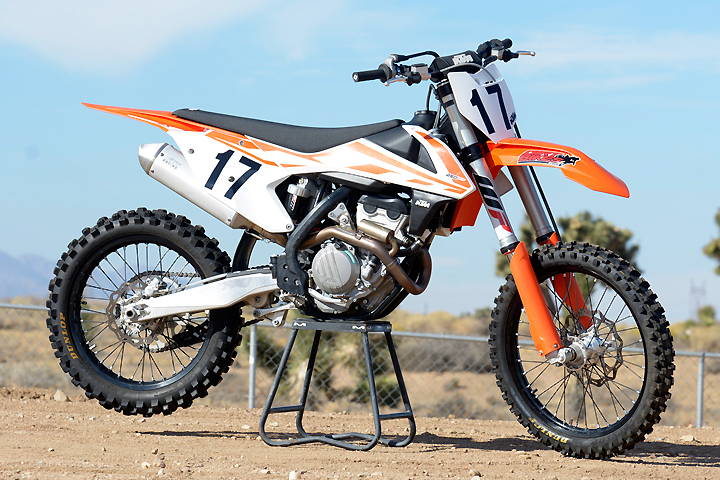 KTM graciously gave us the chance to swing a leg over the production 2017 250 SX-F, so we took it to Competitive Edge MX Park in Hesperia, California, to better understand its capabilities. The track’s long, fast and flowing layout provided a good testing ground for the KTM, and with DirtBikes.com tester Ryan Abbatoye at the controls, we were sure to get a good idea of the orange rocket’s potential.

Right off the bat, Abbatoye noted that the 250 SX-F’s fuel-injected, DOHC engine is fast and throttle response through its 44mm Keihin throttle body is crisp, but the KTM doesn’t necessarily feel all that snappy down low compared to some of the other bikes in its class. Rest assured, the power is there. Strapped to Chris Redpath’s MotoGPWerkes.com dyno, the 78mm x 52.3mm bore and stroke motor spun the drum to the tune of 39.1 rear-wheel horsepower at 13,500 rpm, just a few hundred revs short of its 13,800 rpm rev ceiling, while achieving a peak torque figure of 18.8 lb.-ft. at 8600 rpm. Looking at the torque curve reveals that the KTM builds torque gently all the way up the rev range rather than coming in with a hard hit at any particular point. Thus, like the Husqvarna FX 350 we tested earlier in the year, the 250 SX-F is deceptively fast but must be ridden at high rpm in order to be most effective. That means the KTM favors a momentum-conserving riding style over a supercross-style, a cut-and-thrust approach. 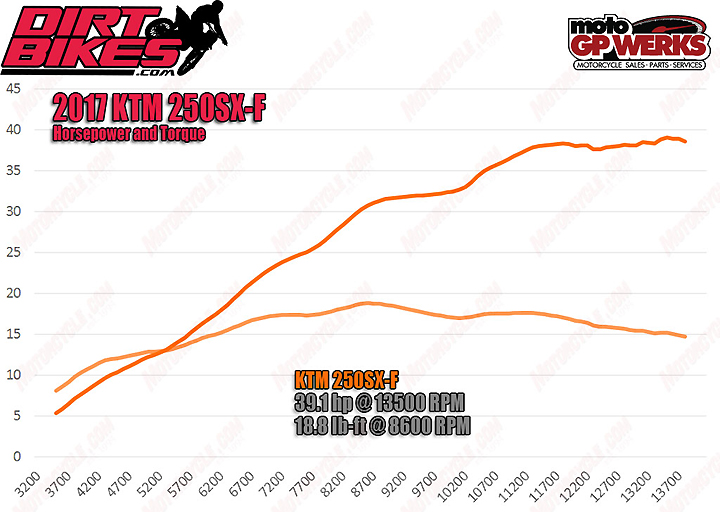 The 250 SX-F will favor the aggressive and punish the timid. Keeping a ready hand on its easy-to-modulate, Brembo hydraulic-activated coil spring steel (CSS) clutch and rowing its five-speed gearbox to ensure that you have the KTM screaming near the top of its lungs will yield ultra-quick lap times. Fail to do so, however, and the KTM simply doesn’t reveal its true self even with the more aggressive of the two ignition maps contained in its ECU.

The 250 SX-F’s steel chassis is certainly up to the task of going fast. KTMs are renowned for high-speed stability, but in the past this was often at the expense of precise cornering manners. The latest generation of KTM’s chrome-moly steel chassis, which was released in 2016, gets it right. KTM engineers labored hard to perfect the main chassis and aluminum subframe to make the package more user-friendly, working to improve its torsional rigidity without adding excess longitudinal stiffness. Checking in with a 58.5-inch wheelbase and 26.1-degree rake, the KTM is extremely stable in at straight line at motocross speeds and yet it will carve an inside line or rail a berm with equal expertise. With its 1.9-gallon fuel cell topped off, the KTM tipped our official scale at 226 lbs., placing 109 lbs. on its front wheel and 117 lbs. on its rear wheel. It’s a good weight balance, as front end traction is plentiful while the 250 SX-F steers precisely and with minimal effort.

Some of the KTM’s turning prowess may have to do with the its new front suspension, which does away with the WP 4CS spring fork, in favor of a WP AER 48 air fork that delivers 12.2 inches of travel. Regardless of its performance, the AER 48 isn’t as complicated as other air forks on the market. It features an insulated air “spring” chamber in the left leg and a pressurized oil chamber for damping in the right, and the air “spring” preload is set via a single air valve located at the top of the left fork leg. The right fork leg features a compression adjuster at the top and a rebound adjuster at the bottom of the leg. The AER 48 offers a substantial weight savings—3.7 lbs.—over the 4CS. Out back, a fully adjustable WP DCC piggyback shock, suspended via a rising-rate linkage, delivers is 11.8 inches of travel.

Naturally, we started with KTM’s recommended front/rear suspensions settings of 154 psi/10.6 Bar in the AER 48’s air chamber while running compression and rebound settings that were 12 clicks out from full stiff. The rear suspension was set at 106mm of sag with the rebound and low-speed clickers set 15 clicks out from full stiff while the high-speed compression setting was set two turns out from full stiff. After spinning some laps on the track, Abbatoye began to play with the front fork pressure, dropping about 3 psi in the fork to better match the rear to his liking. And that was about it.

Where the 4CS and AER 48 are similar is that both forks are great at swallowing up big hits, but the AER 48 is on a completely different planet when it comes to soaking up smaller ripples and stutter bumps. In fact, the AER may be the most compliant air fork we’ve tested yet. While we had mixed feelings about it when we first tested it on the 2017 Husqvarna FC 350, remember that the Husky fork featured off-road-style valving. KTM nailed the valving specs on the 250 SX-F, yielding a fork that offers a plush feel in the rough stuff without sacrificing control. It’s good stuff, and it works in harmony with a DCC shock and rising rate linkage that help the KTM’s rear end track straight and true through whoops and ruts, and eats bumps like it was starving for ‘em. Overall, we rate the KTM’s suspension among the highest of the bike’s highlights.

The KTM is also comfortable during long motos, with natural-feeling ergonomics that make it easy to ride whether the rider is seated or standing. Its 1 1/8-inch handlebar rides in a rubber-damped top clamp that is adjustable and allows for better tailoring of the cockpit to the rider’s preference. The lower handlebar clamps are separated for 2017, while a new bridge-type upper clamp is used for greater torsional stiffness. KTM says it’s also easier to replace the bar in case it gets tweaked from a crash. The 250 SX-F’s seat has a narrow feel through the middle, and slim radiator shrouds reduce the chances that a rider will snag a boot or knee guard when cornering on the 250 SX-F.

The 250 SX-F’s brakes deliver the kind of stopping power that we’ve grown accustomed to from KTM. It’s not for everyone, as some riders have a hard time getting used to the strong initial bite afforded by the Brembo calipers and Galfer wave-style rotors. KTM actually addressed this somewhat by lengthening the rear brake pedal 10mm to help give the rear brake actuation more of a progressive feel, but we didn’t really notice much of a difference. That’s probably because we’ve always appreciated the way KTMs throw out the anchors in the first place.

There are also some nifty conveniences that the 250 SX-F brings to the table, such as its electric start, which has proven reliable enough that KTM doesn’t even bother to throw on a kickstarter for backup anymore. We also like the flexibility afforded by its multi-functional ECU, which offers traction control, launch control and the aforementioned dual ignition maps. All of these functions are handled by a switch on the left handlebar. The systems are easy to learn, and while we never tried the launch control, we can vouch that the traction control will noticeably intervene when the rear wheel begins to spin excessively. There’s also a noticeable difference between the Standard and Advanced (aggressive) engine maps; no surprise that expert tester Ryan Abbatoye preferred to keep the 250 SX-F in the Advanced map during our test.

With a retail price of $8499, the 250 SX-F represents a sort of a bargain in the KTM line of motocross and off-road machines. In boxing parlance, it packs a big bunch although its jab is kind of weak, but it’s light on its feet, its handling is akin to excellent footwork, and its suspension can absorb massive blows. The 2017 KTM 250 SX-F has all the ingredients to be the lightweight motocross champion of the world. 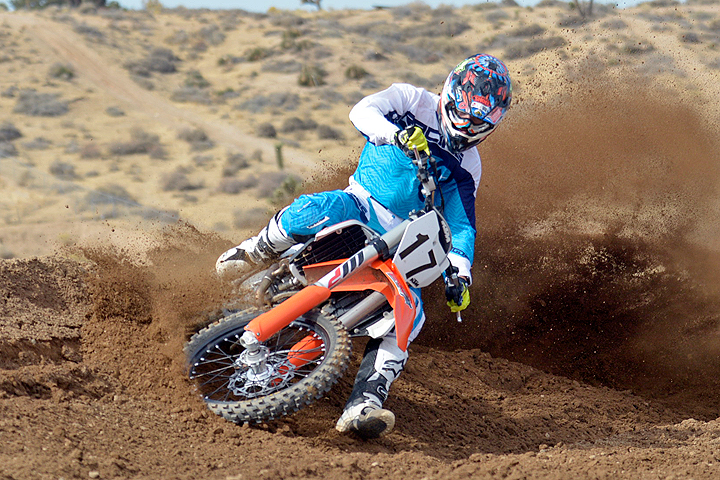 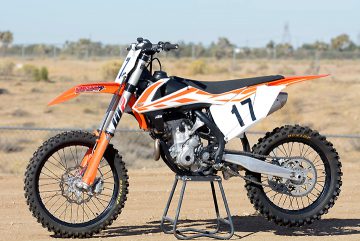