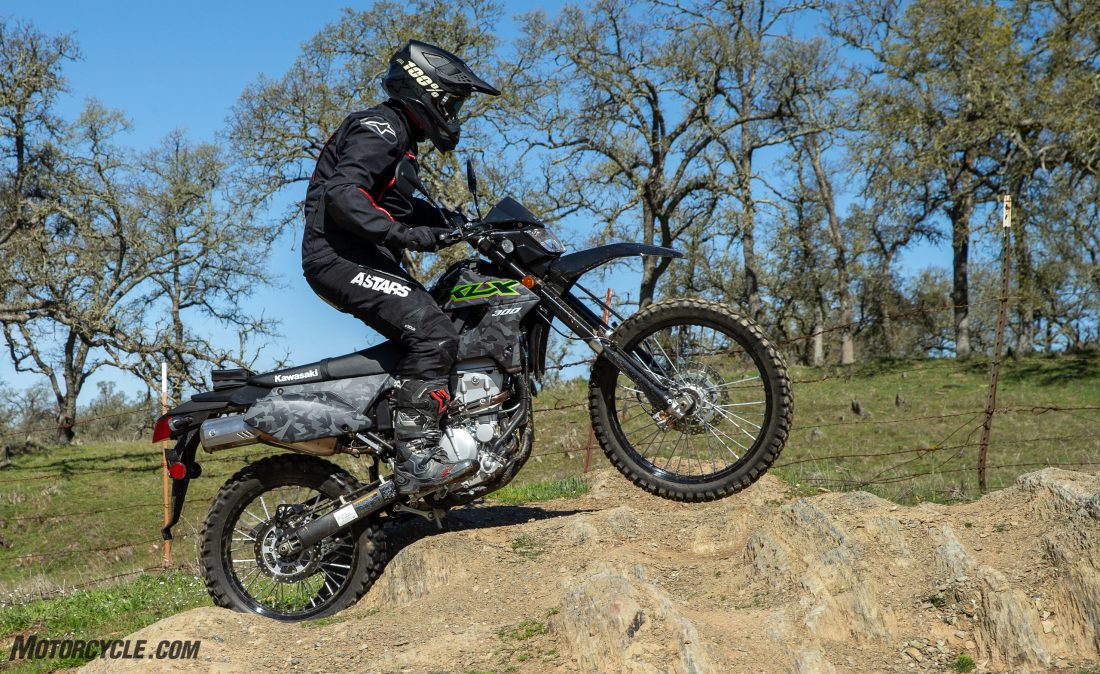 In recent years, motorcycles like the 2021 Kawasaki KLX300 have become increasingly more popular, not only due to its small displacement, but also because it gives riders the versatility of having a mount that’s street legal while being able to handle duties in the dirt without being too intimidating. The KLX update couldn’t come at a better time for folks interested in dual-sport motorcycles. In a world ravaged by COVID-induced change, motorcycling – particularly the off-road segment – has enjoyed a welcome surge of interest for those looking for a new way to fill their time while still maintaining a safe distance from their fellow humans.

The off-road, adventure, and dual-sport segments have been showing growth even before the world was tossed into a tailspin by the pandemic. It’s human nature to want to explore the unknown and dual-sport motorcycles provide the best mix of off-road capability and on-road legality.

Not only has the KLX received a boost in displacement, Kawasaki also brought a new model to the line with the 2021 KLX300SM. Made up of most of the same components, the 300SM focuses on street performance with choice revisions to make it an excellent runabout that is a bushel of fun on the tightest of twisty roads, but more on that another time. For now, let us focus on the KLX300 dual-sport. 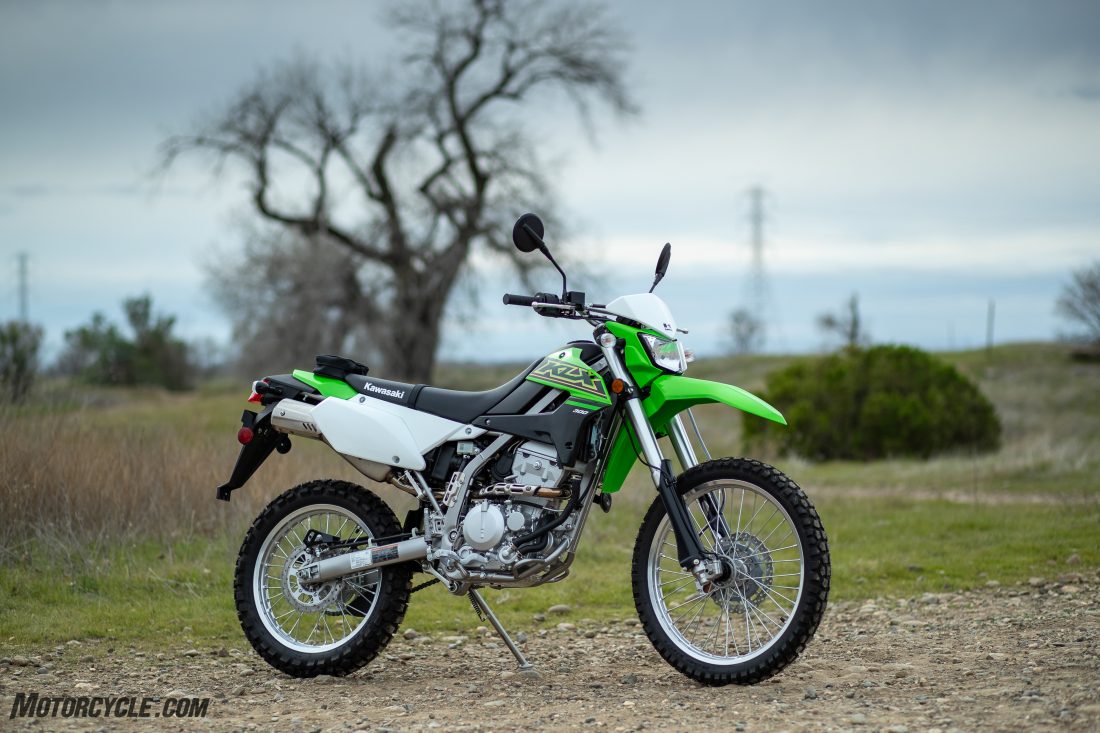 For those familiar with Kawasaki’s dual-sport line, the KLX namesake is a familiar one. Sure, certain models have gone on sabbatical throughout the years, but some iteration has been around since 1979 when the three letters were first used to denote Kawi’s trail bikes back in the day. The 2021 KLX300 should remind you a lot of the outgoing 250 because it is basically the same motorcycle. The boost in displacement is essentially the only real change, but it’s a change that makes an obvious improvement in performance.

Stepping up from the 250 to 300 – 292cc, to be exact – we now see the KLX300 using the same power plant from the KLX300R that we reviewed last May. The increase in displacement was achieved by widening the bore 6mm to 78mm. Stroke remains the same at 61.2mm. The more aggressive cam profiles of the 300R engine lend a quick-revving nature while the larger displacement and 14/40 final gearing give the KLX300 a decent punch of low-end torque that’s helpful both off-road and around town. That’s not to say that you won’t see the LCD speedometer start to fall flat should you find yourself heading up a long gradual climb, but it gets to 70 mph and stays there without issue. Top speed registered on flat ground was 83 while a face-melting 87 mph was indicated heading downhill. 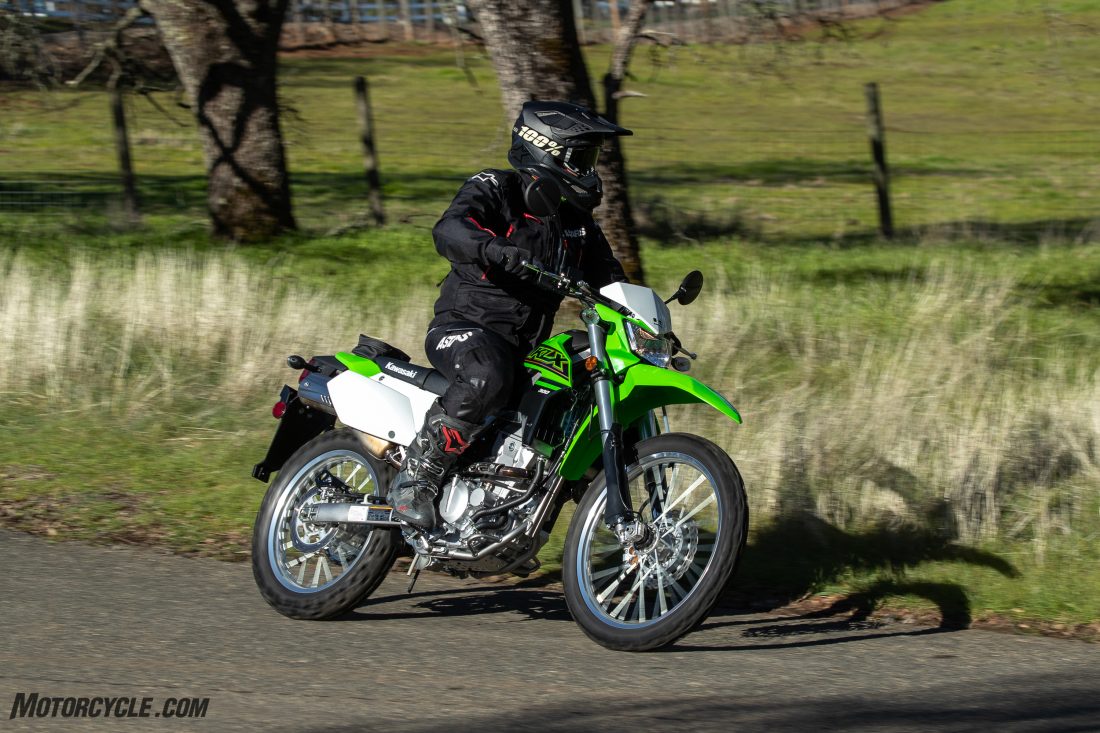 Electric start and fuel injection help ease the learning curve for new riders and are a welcome nicety to anyone who’s spent time without. Kawi tells us the KLX’s cold-blooded nature has been addressed which was apparent on our cool morning start as the bike had no issue firing right up and settling into idle confidently. More than a few riders experienced weak battery issues during our ride caused by leaving the key on at stops, mind you those stops weren’t very long and I hadn’t experienced this issue in other settings. Hopefully, this little niggle was confined to our group of test motorcycles.

Let’s not forget the one other area aside from graphics that has changed: MSRP. Starting at $5,599 in Kawasaki green, the KLX300 can also be had in Fragment Camo Gray for an extra $200. The hip camo bike also comes blacked out from its swingarm and frame to fork and wheels, giving the murdered out look that the cool kids crave. I did happen to notice that the camo option seemed to scratch easily under my knee braces leaving white scuffs under the graphics.

Other than that, the KLX is largely the same as the model it replaces. We still have 10.1 inches of suspension travel from the 43mm inverted fork with 16-way adjustable compression damping. The Uni-Trak linkage-type rear suspension has 9.1 inches of travel and is 20-way adjustable for compression and 30-way adjustable for rebound while also offering pre-load adjustment. All of that ends up giving the rider just over 10 inches of ground clearance, though the larger the rider, the less you’ll end up with once geared up and cruising down the trail. Seat height may be an issue for those short of inseam at 35.2 inches, but the light weight and slim hips of the motorcycle make it less intimidating than the numbers on the specsheet would suggest. Kawasaki claims 302 pounds full of juice.

A 21/18 wheel combo gives riders dozens of options for tire choice, though the Dunlop D605s equipped from the factory provide pretty great traction off-road without feeling ponderous on asphalt. Single rotors front and rear are used with a 250mm disc up front gripped by a dual-piston caliper and a 240mm one in the back squeezed by a single-piston caliper. Initial bite on both can feel a bit touchy if I’m nitpicking, but I try not to because braking power is perfectly adequate for a machine with this amount of power.

KLX250 riders around the ‘net report anywhere from 50-70 mpg with their bikes so expect somewhere between 100-140 miles of range out of the KLX300’s two-gallon tank as well. This is, of course, as always dependent on the heft of your wrist.

Versatility at a (low) price

As mentioned up top, dual-sport bikes provide a nearly unparalleled level of versatility. Arguably more than any other segment in motorcycling. It is of course, always a trade-off. Adventure bikes are comfortable for touring and can deliver pretty great performance on-road and off. It’s only once you get far to either end of the spectrum that you find their weaknesses on the trail or trying to keep up with your peers on sporty machines (the rider makes the biggest difference here most of the time). Dual-sport motorcycles are much the same. 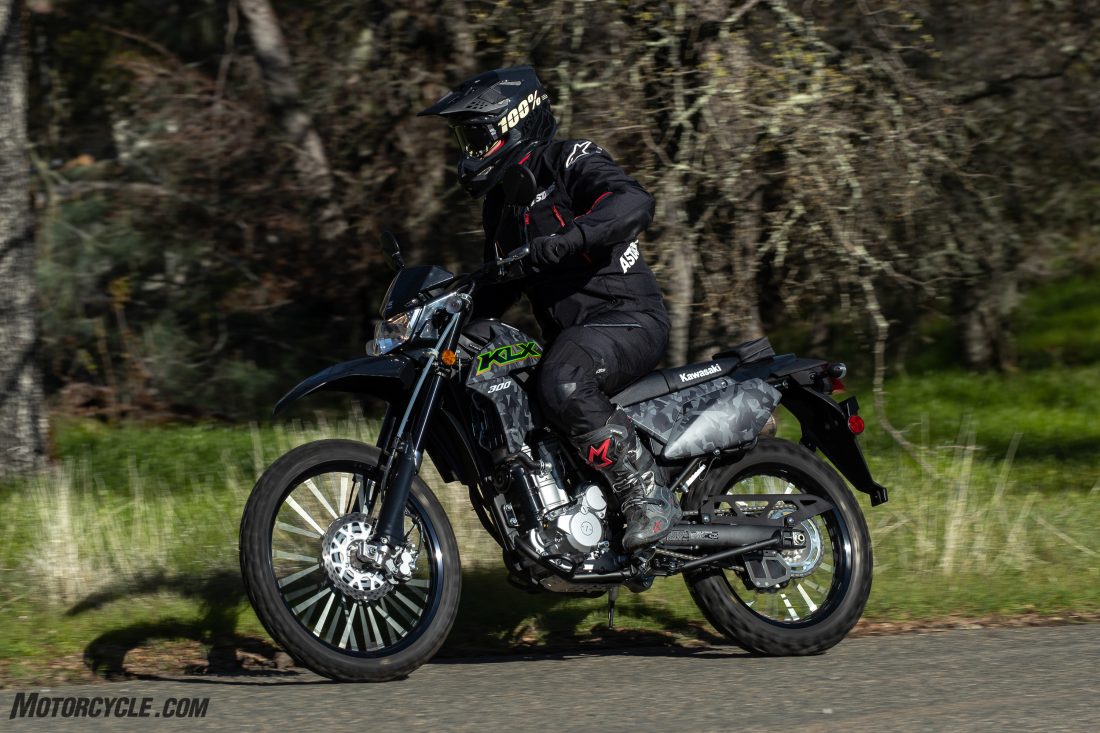 The KLX300 isn’t a surprising motorcycle. It does exactly what you expect it to and it does it well. The motor is tractable for riding off-road and delivers power in a totally unintimidating way that anyone could be comfortable with. Having adjustable suspension at this price rarely happens and opens the door to a larger swath of riders to feel comfortable on the machine. It’s not rewriting the books on suspension performance, but like the brakes mentioned earlier, it does the job and offers adjustability where many others don’t. For larger riders, it will feel under sprung and for smaller, the opposite, but being able to adjust damping settings will at least help riders get closer to optimum settings before they have to consider swapping springs. 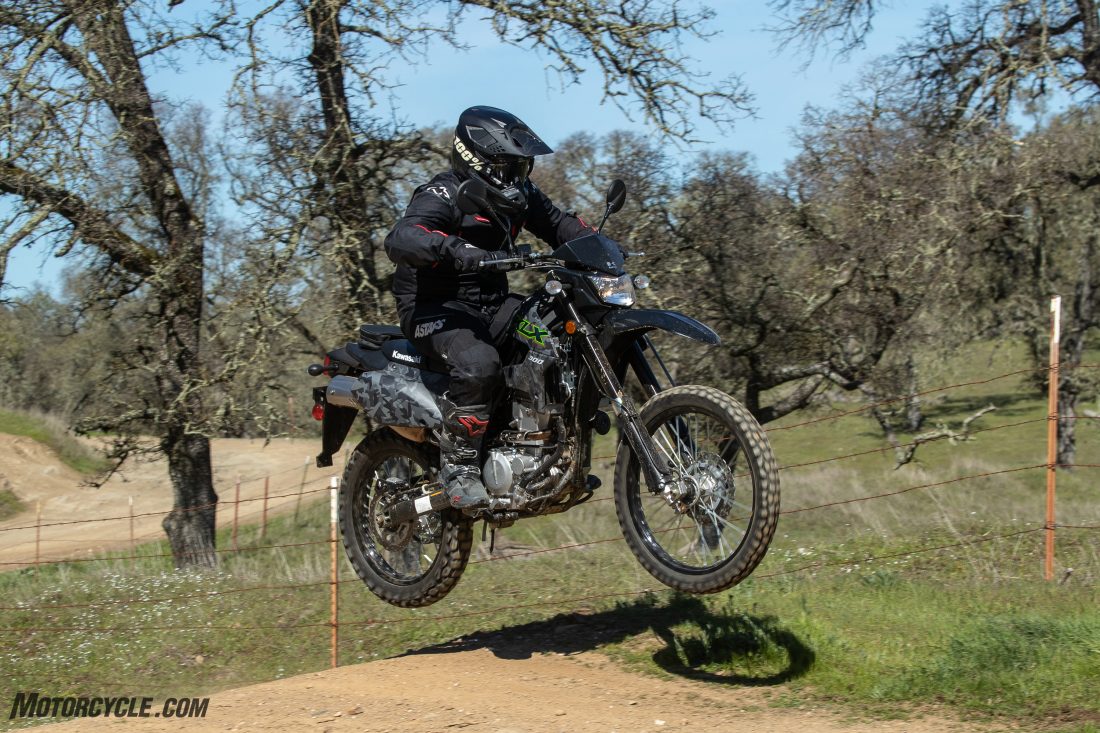 That said, at stock settings, the bike kept itself tracking straight through whoops sections and gobbled up rocks like a Cadillac. I did bottom both ends under more extreme conditions and managed to whack the bottom of the tiny skid plate, but overall, I think the stock setup is commendable.

At 5’8” I didn’t have an issue with seat height or riding whilst sat, but when standing off-road I found myself wishing the bars were higher. Some handlebar risers should take care of that easily, though. The footpegs are somewhat small, but I didn’t have much issue during our day of trail and street riding. The slimness of the entire bike and relatively low weight made it an easy machine to maneuver through anything we threw at it – also for when the inevitable happens and you need to pick it up.

All in a day’s ride 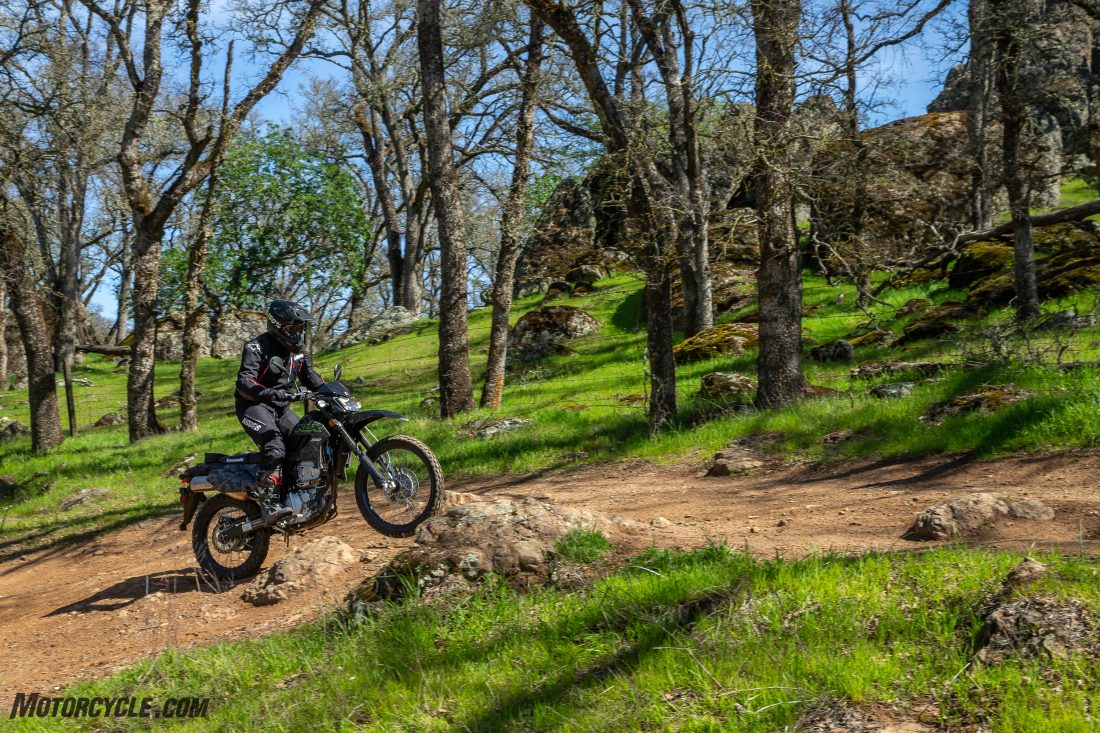 Our morning started off brisk. Layers were donned, and then more layers, and probably a buff or two. We took off out of town and jumped on the nearest freeway to transport ourselves to more tranquil and serene surroundings.

On the freeway, the bike gets up to speed with ease, not necessarily quick, but not too slow either. Cruising at 75 isn’t difficult for the KLX300 and it still had a little more to give with me on board. Once we came to a long gradual uphill though, the speedo slowly began to give up miles, settling in around 70 or just under. I was happy to end our short freeway stint, mostly because it was chilly, the bike felt pretty smooth at speed, not busy like one might expect. 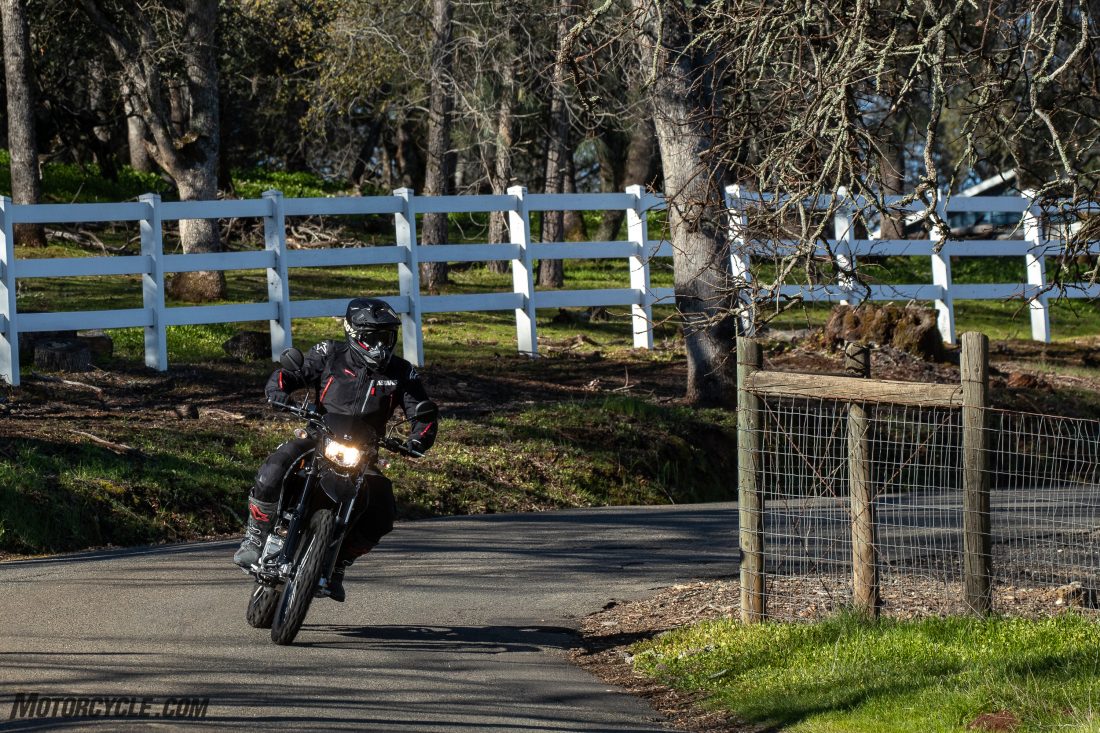 Scooting through small towns and backroads on the KLX300 began to illustrate the motorcycle’s intended use. Even the Dunlop D605s held their own on twisty bits of tarmac without squirming much. We peeled off onto a gravel road and kept on truckin’. Small rocky trails on either side of the road offered fun, quick excursions. At speed, trying to traverse bumpy terrain without slowing probably isn’t wise, as you will run out of clearance and suspension travel, but slow things down and you’ll be rewarded with a plush, comfortable ride.

Later in the day, when we got to poke around an OHV park, the motor’s torque was adequate in most conditions, and as long as momentum was maintained, tackling short climbs or long reasonably steep ones was relatively effortless. 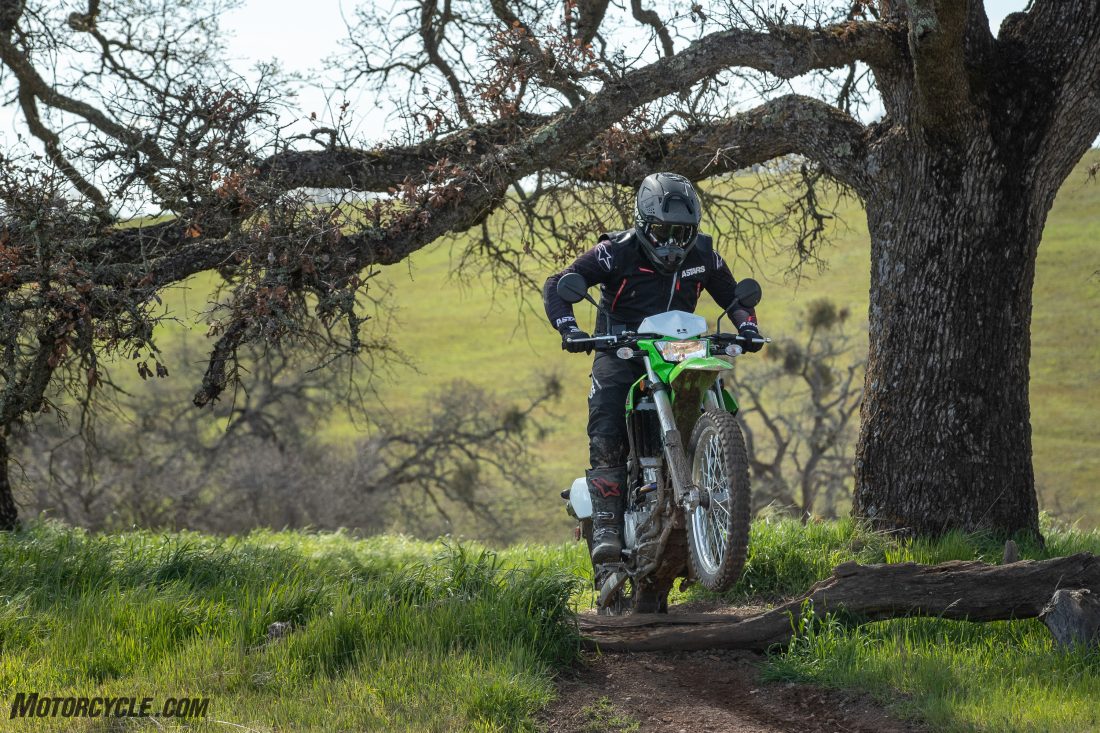 The suspension again showcased its plushness over trails lined with softball to grapefruit-sized rocks and kept tracking straight without deflecting. Again, check your speed and you’ll be fine. If you start trying to hammer through the aforementioned sections or slamming through whoops, you’ll find the bike’s limits quickly.

Keeping a slower pace also allows you to “stop and smell the roses” or in our case while in northern California, listen to the frogs croak in the creek beds and enjoy the cool morning as the sun sifts through gnarled tree branches as you snake between green hills alongside moss-covered boulders continuing down dirt roads. Exploring just to explore and knowing that you probably won’t get yourself in over your head too easily.

At the end of the trail

For families looking for a bike to share whether its to use around town or around a farm, the KLX300 should be an easy bike to keep in the garage. Not to mention that its dirtbike-style setup means it’ll take a lickin’ and keep on kickin’. Servicing the machine should be a cinch as well and easy for those new to maintaining motorcycles. 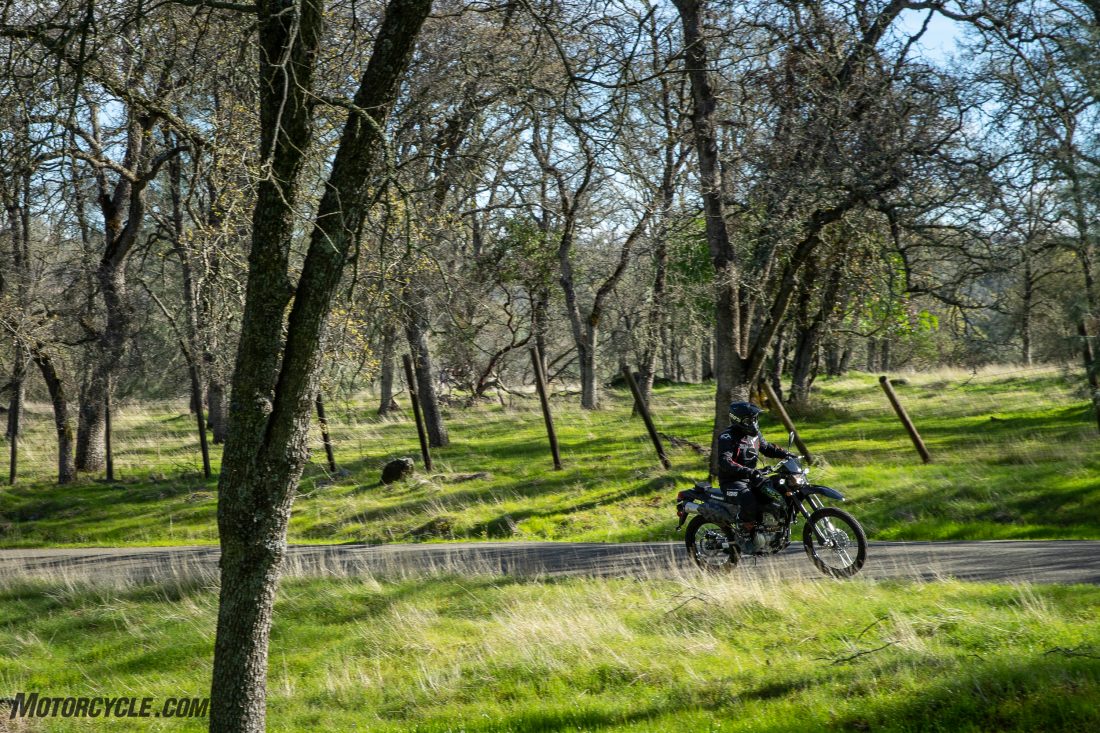 Having a day out riding trails with your friends and exploring is what it’s all about, and being able to run errands around town when you’re not is what makes the KLX300 attractive to many. Our own E-i-C, Brasfield is planning to ride one alongside his daughter as she learns to ride a small dirtbike. It will be a great learning experience for both of them (stay tuned for that heartwarming story). Just another scenario that Kawasaki’s KLX300 is perfectly suited to.