Monster Energy/Pro Circuit/Kawasaki’s Adam Cianciarulo is finally ready to get back to work at the Lucas Oil Pro Motocross Championship season opener.

“I broke the navicular bone in my wrist about three to four weeks before the opening round of the East Coast Monster Energy Supercross series,” Cianciarulo said. “It’s been about 12 weeks since then and I’ve been back on the bike for the last few weeks, preparing for the opening round of the Lucas Oil Pro Motocross Championship. My arm was in a cast for around four weeks right after my crash and have been doing physical therapy since then. Since I have been able to start training again, I’ve been doing everything in my power to get back to out there as soon as possible. It’s what I’ve grown up doing, it’s what I love to do. Everything with my wrist is solid now. Everything has healed very well. 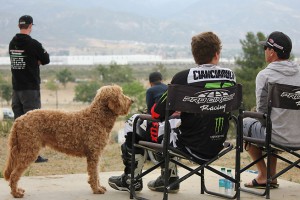 “I feel good heading into the outdoors. Over the last few years it seems I get injured at the worst times. I haven’t had as much time back on the bike as I would like, but I feel very confident with in my program and we’ve made a lot of progress with testing in a very short period of time. I’m very excited to head up Hangtown for the first race, it’s been almost a year since I’ve raced, I can’t wait to be back out there. The chase for the top is what keeps me going and when I am racing I feel at ease. I’m happy to be back out there and making progress. I still believe in my ability and that I am fast. I haven’t lost that aspect. It’s just about me being patient and getting through the season healthy.”