A new three-race King of the Motos format included a night race, a desert race and an extreme race, all guided by nothing more than a GPS. But after three races—one interrupted by a helicopter rescue for KTM’s Taylor Robert—it was Rockstar Energy Husqvarna’s Colton Haaker who was crowned 2017’s King of the Motos.

Haaker’s win came well after Cody Webb crossed the finish line of the final race. FMF/KTM’s Webb led the way throughout the entire race, having dominated the proceeding from start to finish, but a mistake near the finish caused him to miss a check, and subsequently drop back in the standings from first to 17th.

“I went down the same path I went from the morning race not paying attention; it’s completely my fault,” Webb confessed. “I saw the finish right there, but I didn’t realize the GPS went to the other side. I went down a trail we went down last year and it’s not any more difficult. It’s probably almost easier; I missed a waypoint at the bottom of that and missed the overall.”

Webb’s mistake was Haaker’s fortune, as the blunder handed him the overall with his 3-3-1 tally. Haaker admitted he came into the race without as much preparation as he probably should have, but was happy to come away from the complicated event with the win. Event promoter Jimmy Lewis likes to keep riders on their toes with different race formats each year, and this year the challenge required riders to rely on their GPS more than ever.

“This year you relied a lot more on GPS,” Haaker said. “Last year you relied on GPS for the morning race, which was just a gate pick for the afternoon and in the afternoon the GPS really only mattered for the first lap then after that you pretty much remembered the course and just pinned it for the next eight laps. But this year there wasn’t laps, it was just a huge loop.”

Haaker would have done well to simply follow Webb, who was leading, but admits Webb was out of sight pretty quickly in the final race.

“He led that last race and pretty much knew where he was going right from the get-go,” Haaker said. “The rest of us were all in a big group kind of circling trying to figure it out. I don’t really understand how he figured it out so well other than he probably put a bunch of preparation in this race.”

Still, Haaker rode his own pace and remained steady, which ultimately paid off. Second overall went to Factory Beta rider Max Gerston who carded a 4-2-2 score. Mitch Carvolth rounded out the podium with his 5-4-3 finish. Webb was dropped to seventh overall due to his 17th place finish in the final moto.

FMF/KTM rider Taylor Robert started out the event with a win in the first moto—Saturday’s night race spectacle. Robert and Webb got out front early and duked it out through the extreme course, which ended with a side-by-side battle to the finish between the two teammates. The duo raced bar-to-bar down the final descent, a steep sandy downhill, in what Webb described as fourth and fifth gear tapped. They crossed the finish within feet of each other, Robert taking the win.

The teammates were prepared for a second showdown the next morning in what riders described as a “desert race,” but that’s when disaster struck for Robert.The duo again got out front early, having cleared the first bottleneck section ahead of the rest of the field. They reached high speeds across the desert as they battled for the lead, but Robert hit a rock and went over the bars in a spectacular wreck. Webb, who didn’t witness the crash, carried on with the lead. But unbeknownst to him, the race came to a halt behind him.

Haaker was the next rider to come up on Robert, and seeing him passed out, Haaker immediately came to a stop.

“As I came up across the hill about 20 seconds later, he was already on his back, fully passed out,” Haaker said. “I turned and tended to him and tried to figure out what I could do to help. I couldn’t get to his tracker; I didn’t want to move him so I just used my tracker and tried to get the helicopter there.”

The rest of the field took a cue from Haaker and stopped at the scene, reluctant to continue without knowing the condition of Robert. Fortunately he regained consciousness (reportedly having passed out from winding himself in the crash—not due to a head injury), and was able to walk before being taken to the ambulance.

Much to the racers’ credit, after stopping for their fellow rider, they resumed the race with the gentleman’s agreement to leave in the order they arrived, though time segments were impossible to account for.

Meanwhile, Webb was at the finish all alone not knowing what had happened.

“After the race they told me Taylor got hurt,” Webb said. “I had a feeling the whole time. I knew he should have caught me. I almost teared up. I didn’t know how bad it was or anything. He’s pretty banged up, but I’m glad to hear that he’ll be all right.” Initial reports said that Robert had some internal injuries that were still being monitored at a local hospital.

Times were later adjusted for the riders who stopped at the crash scene, which led to some confusion in the final tally later that night. But in the end, after the injuries, time adjustments and missed checkpoints, Haaker was crowned the winner.

“I’m glad I hit all the checkpoints the past two days!” Haaker said. “I aimed at staying on two wheels, catching all the checks and having fun. It added up to my second KOM victory in three years. Big thanks to the whole team; it was definitely a team effort to make it to the finish today.” 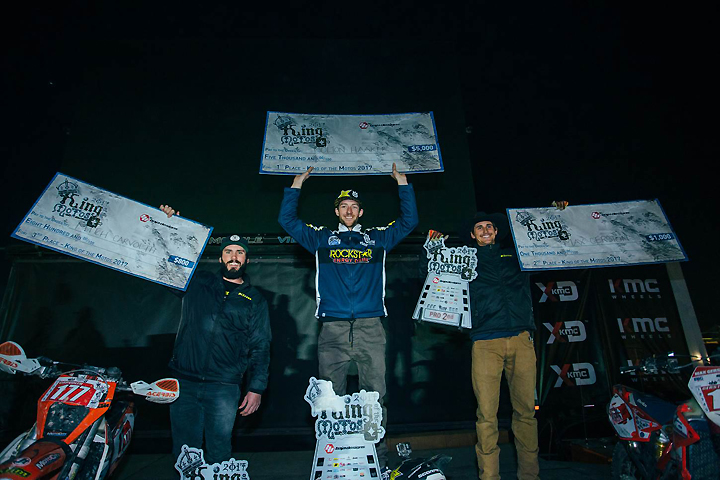