It seems as if it should be easier that it is to win the Monster Million at the Monster Energy Cup, yet coming into the 2016 edition of the all-star showdown in Las Vegas, only one rider, Ryan Villopoto has ever cashed the big check.

Tonight, after the dust settled at Sam Boyd Stadium, the $1 million payout was safe for another year. Monster Energy Kawasaki’s Eli Tomac walked away with the $100,000 first prize check as the 2016 Monster Energy Cup Champion while Team Honda HRC’s Ken Roczen was lucky to walk away at all.

Roczen, the reigning Lucas Oil 450cc Pro Motocross Champion, showed that he will be a force to be reckoned with in 2017 when he took the lead on lap one in the first of the three 10-lap Monster Energy Cup main events and steamed into the lead. Rocky Mountain ATV-MC/Butler Brothers KTM’s Blake Baggett ran second for two laps before Tomac was able to pass him on lap two.

Roczen chose to take the Joker Lane on lap nine of 10, and Tomac followed him through, allowing Roczen to take an easy win and get a leg up on the big $1 million payout. Reigning Monster Energy AMA Supercross Champion Ryan Dungey finished third ahead of teammate Marvin Musquin and Baggett.

“It was a good first race with the HRC Honda Team, I’m happy with how the bike worked on the start and on the track,” said Roczen. “I’m looking forward to the rest of the night and seeing what we can do.”

Roczen appeared to have the mojo going in the second Monster Energy Cup main event as well, grabbing the holeshot and picking up right where he left off in the main event. But then it all came undone on lap seven when Roczen mistimed a rhythm section and suffered a spectacular endo that left the capacity crowd gasping. Roczen was able to get up quickly, but he did not rejoin the race, ending his quest for the Monster Million.

Tomac was running second when Roczen went down, and he inherited a huge lead over Dungey and Musquin before going on to take the race win. Factory Yamaha veteran Chad Reed enjoyed his best finish of the night by finishing fourth ahead of Team Honda HRC’s Cole Seely.

“I came in with a little bit too much momentum on the start and it cost me the holeshot,” Tomac said. “It was unfortunate to see Ken [Roczen] go down, we laid down a quick pace early and yoyo’d each other back and forth.”

Reed grabbed holeshot in the final Monster Energy Cup main, but Smartop/MotoConcepts Honda’s Mike Alessi quickly passed him and move into
the lead. Reed would crash shortly after that, recovering to finish 12th in the race. Roczen, who was back in action after his second main evet mishap, ran second before running down Alessi and passing him in a right-hand corner to take the lead on lap four. From there, Roczen controlled the lead through the finish.

The race for the Monster Energy Cup win came down to Dungey and Tomac. After starting 10th, Tomac charged through the pack to catch Dungey, who was running in third place, behind Musquin, on lap six. Dungey then made a mistake, allowing Tomac to pass him and move into third place.

Roczen and Musquin took the Joker Lane on lap nine, giving Tomac the lead, but neither Tomac nor Dungey had taken the lane. Both were forced to do it on the final lap, allowing Roczen back into the lead and Musquin into second place. Dungey then surprised Tomac by passing him for third place. However, Dungey was not close enough to catch Musquin before the finish. That meant the difference in the final tally, as Tomac was able to claim the Monster Energy Cup by one point over Dungey, with Musquin third.

“It was a crazy race and I did not make it easy on myself with a terrible start,” Tomac said. “I knew going into the race that I just needed to finish behind Ryan [Dungey] and I was able to catch up to him and have a good battle before settling on the last lap. I’m really happy with tonight’s performance and looking forward to the next season.” 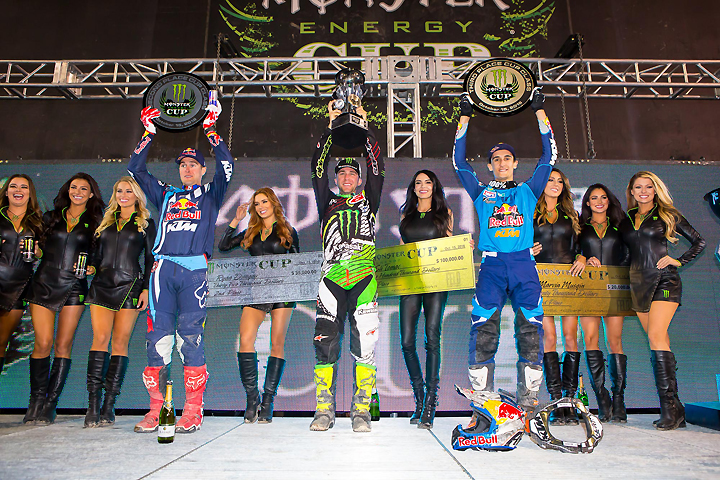