It’s rare when a factory offers an exact replica of the motorcycle on which its factory riders compete in National- or World-level competition, but Italy’s Beta has added a Beta EVO Factory Edition to its 2014 lineup of trials motorcycles.

Available in the U.S. through American Beta, the Beta EVO Factory Edition is a replica of the bikes that official Beta riders use in top national and international competitions and, according to the factory, are synonymous with excellence and exclusivity. A Beta EVO Factory Edition won the 2013 125cc class World Trials Championshp, and finished third in the 2013 World Pro.

Beta EVO Factory Edition models are designed by the Tuscan manufacturer’s R&D department while taking advantage of the factory team’s experience and the use of aftermarket parts to make bikes that represent the pinnacle of state-of the-art technology and raise the performance bar. They are truly intended for expert riders who are looking for the highest performance available in a Beta trials machine as well as for beginners or collectors who want an exclusive motorcycle.

Three Engine Sizes
EVO Factory models are available in are available in three engine sizes (125cc, 250cc, and 300cc), and the company says that all the engines are built with carefully selected components and painstakingly fine tuned. They are based on a lightweight magnesium engine crankcase that sheds about 3.3 lbs. from the machine, allowing better handling. A new 12-pole, 110-Watt ignition is used to provide more electrical power for the various systems. The electric fan benefits particularly from this feature, says Beta, as it is able to cool the engine more efficiently and ensure more stable operating temperatures and performance. The new ignition is also mounted in a reverse direction compared to traditional bikes which allows the rotating masses to be centered as the center of the flywheel is closer to the crankshaft. The intent is to increase the machine’s agility and make it easier to ride, particularly during aerial moves. A new magnesium flywheel cover functions as a stator support and has a gasket to ensure a water-tight seal for the flywheel chamber.

A 22/69 ratio primary drive allows a decrease in the torque transmitted to the clutch, and the rider can also choose between two spring preload values (selecting the spacer mount direction) to reduce lever pull effort. The EVO Factory also uses special clutch discs for smoother and more precise operation, giving the lever a better feel.

The 250/300 versions of the Beta EVO Factory Edition also get a new, longer silencer that the company says sounds better and also works with the manifold to provide better handling and riding precision. All of the engine sizes feature a titanium exhaust manifold which is brand new. For the 250/300 versions, the new design is intended to provide increased torque at low engine speeds.

Slim Chassis
A white frame and eye-catching, factory-style graphics give the Beta EVO Factory Edition models a unique look while retaining a traditional mixture of white, red and blue patterns that give it a racy appearance.

Beta says that it worked hard to improve the Factory Edition’s suspension in order to deliver better performance. The front fork tubes are shorter to better fit the new yokes. The internal cartridge and the CNC-machined adjuster caps have been lightened. The forks are finished with black CNC-machined triple clamps that shave 100 grams) and show off the Factory Beta logo.

The rear monoshock uses a new yellow spring that is lighter and is preloaded by a new ring assembly with a plastic containment spacer that ensures less friction. The Factory Edition’s suspension calibration is also different from Beta’s standard trials machines.

The EVO Factory Edition also has a slightly different front brake setup, which includes a new Braktec master cylinder that reduces weight and is said to improve feel. Beta’s Factory-Design brake discs complete the package. The clutch master cylinder is also updated to match the new, modern design of the brake master cylinder, and it matches the new frame color.

The Beta EVO Factory Edition’s aesthetics are complemented by a few anodized details such as the chain tensioners and handlebar caps, which are red.

The new Evo Factory editions will be available the first of April at Authorized Beta dealers. They are also available for order through American Beta’s exclusive BYOB (Build Your Own Beta) program. 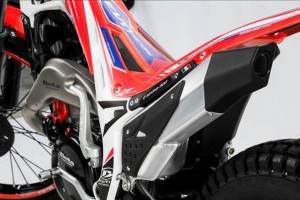