Thanks mostly to the European brands, especially KTM and Husqvarna, the two-stroke off-road dirt bike has not only survived to this point in the new millennium, it has thrived, making it feasible for us to even create a list of Ten Best Two-Stroke Dirt Bikes, let alone a list for off-road machines.

Seriously, in the face of ever-tightening emissions laws, two-stroke internal combustion engines aren’t exactly smiled on by pollution-policing agencies such as the EPA and the California Air Resources Board, the latter reportedly pushing to sunset the red sticker program that has made it possible for emissions exempt dirt bikes from being operated on the state’s public land

It remains to be seen whether KTM and Husqvarna’s bold move to introduce the 2018 KTM 250 XC-W TPI and 2018 Husqvarna TE250i with their revolutionary fuel-injected two-stroke engines will further revitalize the two-stroke market, but in the meantime, ringy-dingy fans who prefer tackling single track trails rather than motocross track ruts, jumps an whoops, have a plethora of options available through motorcycle dealerships, and they aren’t all just 250cc two-stroke enduro models. 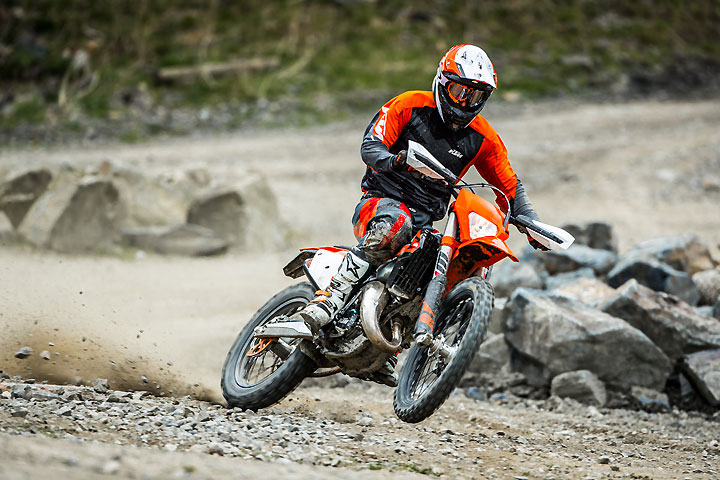 While we still lament the discontinuation of the Kawasaki KDX200, which we named as one of the best used dirtbike buys of all-time, and KTM ceased production of its 200cc XC-W of its XC-W off-road model, but the 150 XC-W (it actually displaces 143.9cc) is a solid choice if you’re in the hunt for a lightweight two-stroke off-road machine with modern conveniences such as electric start. The 150 XC-W benefits from KTM’s latest chassis upgrades, which include the WP Xplor 48mm fork, which make it a better choice than a used 200 XC-W in our opinion, and what it may give up in torque is offset by more horsepower than the old 200cc engine made in stock form.