Two weeks, nearly 6000 miles, weather extremes from hailstorms to temperatures over 110° F, altitudes from sea level up to 15,000 feet… and did we mention you have to find the way yourself? There is no doubt the Dakar Rally is the toughest race on the planet, and there is no greater challenge than to face it from the seat of a motorcycle. Here is a look at the top 10 motorcycle contenders in the upcoming 2017 Dakar Rally. Who are your picks for the overall podium? 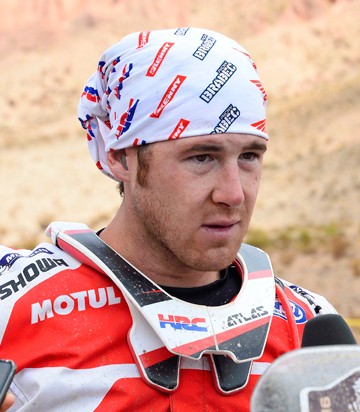 10. Ricky Brabec
Monster Energy Honda Team (#9)
Dakar Rally organizers ASO would love nothing more than to attract more American fans. Enter young American Ricky Brabec. Honda is currently sculpting the 25-year-old to become a rally specialist–a feat that presumably takes years–but in his first attempt in 2016, he was the top-finisher for the HRC Factory Honda team, notching a top-10 finish in ninth overall. He is taking to rally racing “like a duck to water” according to his HRC teammates.

Things look promising for the California desert racer, who already has two AMA National Hare & Hound Championships, a Best In The Desert Championship, and SCORE accolades that include Baja 1000, Baja 500 and San Felipe 250 wins to his credit. Brabec may still be cutting his teeth in rally racing, but we could very well see some fireworks from Monster Energy Honda’s bright star at the 2017 Dakar Rally.