Props to DirtBikes.com Editorial Director Sean “I just like to watch people suffer” Alexander for passing us this video entitled The Race From Hell on the Street Motorsport & Graphics Facebook Page. 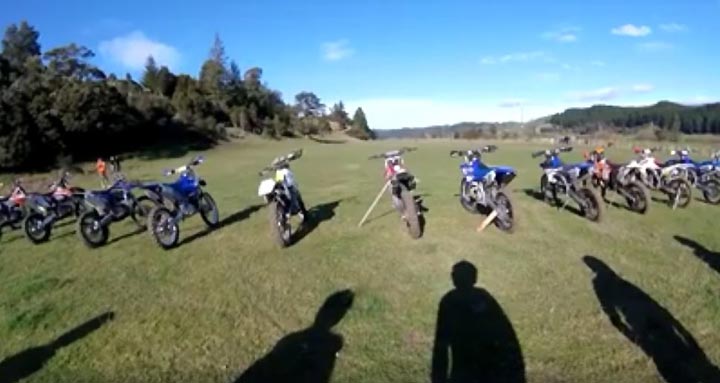 We’re not sure where this race video was actually shot, only that it comes courtesy of Sowman Films. But wherever it is, it appears to be pretty fun-looking scramble course, with wide open pasture seconds splitting up tight and technical woods sections.

But what’s more impressive about this video is that it portrays just how hard rider Josh Donald has to work in order to come from last place to finish second in the race. Donald starts off by, well, not starting, as he struggles to get his Honda CRF fired up after the dead-engine start gets underway. Donald passes riders like a madman, but stalls the bike a few times along the way. Crashes also begin to take their toll, and you can hear Donald’s voice as he begins to cramp and lose feeling in his hands.

The fatigue becomes even more obvious when Donald begins to wipe out the banners that mark the course sections. Even so, at one point Donald manages to find his way into the lead, pretty impressive, considering what he has gone through, and he ultimately finishes second in the race.

Naturally, the viewer comments on the Facebook page range from ridicule to respect. Some say that Donald can’t ride a lick, while others give him a lot of respect for his speed and tenacity. No matter. The video is extremely entertaining and worth a look. It’s a glimpse into the beauty and the challenge that off-road racers of all skill levels experience at events around the world every weekend.

Extreme is what you make it.