Yamaha’s YZ250X is one wicked two-stroke that can handle everything from the deep woods to the open desert.

Yamaha has been hard on the gas when it comes to producing intriguing off-road-specific motorcycle models during the past two years, and off-road fans been introduced to some truly great machines.

The tuning fork brand fired its first shot toward off-road domination in 2015 when it released a long-anticipated, all-new WR250F, boasting the company’s latest motocross engine technology in the form of its fuel-injected, rearward-inclined four-stroke Single. But Yamaha didn’t stop there, surprising cross-country racing fans with the amazing YZ250FX, a bike so good that it earned an honorable mention, behind none other than the YZ450F, in our sister site Motorcycle.com’s Best Dirtbike of 2015 honors. For 2016, Yamaha has been even more aggressive, releasing two more all-new off-road four-strokes based on the YZ450F, the WR450F and YZ450FX. 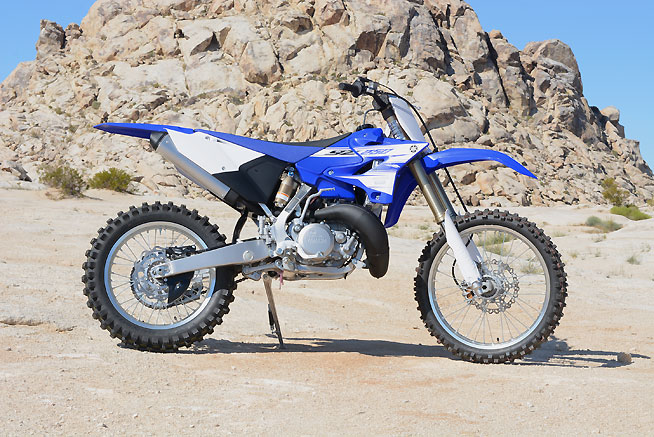 While those models were logical next steps in Yamaha’s retooling of its off-road arsenal, the 2016 Yamaha YZ250X really wasn’t. But, after swinging a leg over Yamaha’s newest two-stroke model, all we can say is hooray for the dreamers, because the 250X is a dream come true for Japanese off-road dirtbike fans who still prefer the sweet smell of premix.

The YZ250X builds on a Yamaha legacy of high-performance two-strokes that dates all the way back to 1961 when the company released its YDS2C two-stroke twin “with scrambler kit.” The YDS2C was the first Japanese-built off-road racer to be available in a dealer showroom, and it was followed by a string of successful two-stroke off-road models, including the legendary DT-1 250 enduro. It has been a while since Yamaha released its last—and previous best—two stroke off-road racer, the the YZWR (aka the WR250Z), which enjoyed a long production run from 1989 to 1998. The YZWR was discontinued just as the four-stroke boom took over the dirtbike world.

Of course, developing the YZ250X all these years later was a piece of cake for Yamaha, which remains as the only Japanese OEM to carry the two-stroke torch in motocross. With the state-of-the-art YZ250 already in the family, all Yamaha needed to do was make some tweaks to the platform to bring the YZ250X to light.

That included giving the X-version’s 249cc liquid-cooled, carbureted, reed-valve-induction, two-stroke a milder compression ratio by adding slightly more volume to its combustion chamber. Because the Yamaha Power Valve System (YPVS) alters compression ratio along with port timing, the YZ250’s compression ratio ranges from 8.9:1-10.6:1. The YZ250X’s compression ratio ranges from 7.9:1-9.4:1, which actually helps the X motor rev a little more easily. The X’s YPVS has also been re-tuned to open more broadly and gradually than the motocross version, which helps low-end power while also giving the YZ250X plenty of mid-range thrust and top-end screamability. Yamaha engineers also fitted the machine with an expansion chamber designed specifically for off-road racing, making it narrower both horizontally and vertically for added ground clearance. The YZ250X also receives a different CDI unit than the YZ250, with timing designed to soften the hit while also extending it over a broader rev range.

While Yamaha claims that the YZ250X is designed for GNCC-style closed-course competition through the woods, we couldn’t resist putting our test bike through its paces at our favorite local desert spot, which offers a mix of vision-blurring high-speed terrain, deep whoops and sand as well as technical rock sections and single-track terrain—everything necessary to put the X to the test. It should be noted, however, that the YZ250X does not come equipped with a U.S. Forestry-approved spark arrestor, so you’ll need to add one to avoid being hassled by “the G” while riding on public land.

The YZ250X’s engine starts easily, and once warmed up it impressed us immediately, with a smooth low-end bark that transitions seamlessly into a silky mid-range and a warp-drive top-end. Carburetion through its 38mm Keihin PWK carburetor is crisp and clean, thanks to a throttle position sensor that is designed to help tailor the air/fuel mix throughout the rev range—almost like fuel-injection, but not quite. It gives the X excellent throttle response regardless of what gear you’re in or where you are in the powerband. Everyone from our national Hare & Hound-caliber experts to rank novices raved about the Yamaha motor. It’s smooth as silk, yet it oozes power everywhere, and it revs to the moon. It’s easy to ride fast, and it can make you feel like an off-road hero, which only adds to the fun factor for riders of all skill levels.

The YZ250 and YZ250X both feature five-speed transmissions and 14/50 final drive ratios, but the YZ250X’s five-speed is a wide-ratio unit designed to be more effective in everything from tight woods sections to wide-open terrain. The first two gears are the same on both models, but from there the X’s transmission differs, with a slightly lower third gear ratio than the YZ but with much taller fourth and fifth gear ratios. Yamaha says that fourth gear is effectively the same as making the final drive a 14/48 while fifth gear is like dropping to a 14/43—or about the closest you can come to light speed in wide-open terrain. The X’s shifting action is smooth and precise, although we found many instances where the combination of the X’s broad power and the breadth of its gearing allowed us to just keep it in third gear or fourth gear. The engine had no trouble taking up the slack in a wide range of trail conditions. The transmission is a perfect fit for off-road use.

And although you’ll hardly need to touch it once underway, the YZ250X’s cable-operated clutch features a light pull and easy modulation, proving that a hydraulically actuated clutch isn’t a necessity in the off-road world. The only real advantage is that a hydraulic unit will automatically take up the slack at the lever as the clutch plates wear, but Yamaha has fitted the X with the same “works-style” lever barrel adjuster found on the YZ, which makes for easy, on-the-fly clutch play adjustment. The light pull comes courtesy of clutch springs that are 10 percent lighter than the YZ’s.

About the only place where the YZ250X’s motocross heritage shows is in its backbone-style aluminum chassis, which shares the same geometry as the YZ250. It also works well in the off-road environment, as it steers with precision and is generally very stable at most speeds. However, our expert testers noticed a slight tendency for the X to squirm when pinned at ultra-high speeds. It’s far from scary, and it’s something that an aftermarket steering stabilizer would remedy, but it is noticeable. Beyond that, the X’s chassis feels light and flickable, making it a blast to ride when snaking through rocky, technical terrain.

The YZ250X’s handling prowess is only enhanced by its fully adjustable KYB spring-type fork with speed-sensitive damping up front and fully adjustable KYB piggyback shock out back. The X gets the same front and rear spring rates as the YZ, but Yamaha revised the valving shim stacks to give the suspension a more progressive feel for off-road terrain. That helps it deliver a smooth 11.8 inches of front wheel travel and 12.4 inches of rear wheel travel with reduced deflection in small bumps or rocks. The suspension definitely feels softer than its YZ counterpart at higher speeds, although pounding endless strings of desert-style whoops failed to elicit a negative comment from our testers, who feel that it does an excellent job of maintaining control without bottoming while retaining a comfortable ride. That’s a real plus in long off-road races.

The YZ250X’s brake components are identical to the YZ250’s. Nissin calipers clamp wave-style rotors measuring 250mm up front and 245mm out back. While we mostly found the brakes to be powerful enough to slow the speedy YZ250X, one tester felt that the rear brake is a touch on the sensitive side, but that’s nothing that a pad change wouldn’t fix.

The YZ250X is also very comfortable to ride for the long haul, something we were happy to learn during our day in the desert. Its YZ-bred ergonomics are slim and its seat, pegs and bar position aid in its roomy overall feel whether seated or standing.

Are there some things we would like to see added or changed on the YZ250X? Yep. Yamaha delivered an excellent off-road racer but did so without including a factory skid plate and hand guards, a faux pas in our book. We would also like to see the YZ250X delivered with a spark arrestor for its factory muffler so that the bike can easily be converted for riding on public land. And while the X also features large-capacity radiators with ten-row cores and four louvers to optimize engine cooling, we think that Eastern riders would appreciate a fan system to further aid cooling in the slow and often muddy conditions in their neck of the woods.

On the other hand, Yamaha made the right moves by adding an 18-inch rear wheel and a 2.1-gallon fuel tank to the X. The Dunlop Geomax AT81-shod wheel is practically an off-road requirement as it allows the fitment of a tire with more sidewall, which flexes more for better traction in soft terrain and rocks while also doing a better job of guarding against flat tires. The front and rear AT81s are an excellent tire choice, delivering consistent traction over a wide range of surfaces from sheer rock faces to deep sand. The fuel cell obviously extends range, although our desert brigade naturally wanted to see an even larger-capacity tank. Nitpickers!

But even without all of that stuff, the YZ250X is truly a bargain-priced off-road stormer. At $7390 it is a lot less expensive than its main rival, the KTM 250 XC, which retails for $8699. If you’re a potential buyer who has the budget for either, then you can certainly afford to add a skid plate, hand guards and other accessories to tailor the YZ250X to your needs, and maybe even have some change left afterward. If not, the YZ250X’s performance will still get you in the game. So, build it as you go.

We would, because we dig the Yamaha YZ250X in a big, big way. Its engine flat rips while delivering that zingy two-stroke siren song, its suspension is dialed-in for off-road racing right out of the crate, and its handling and ergonomics all but guarantee that you can pick your way through technical sections or pile on the miles in comfort. Whether you ride in tight woods or across expansive desert terrain, the YZ250X is one awesome off-road motorcycle. 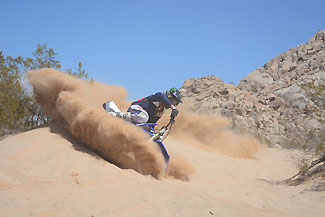 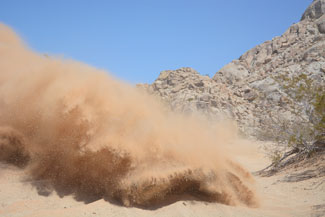