A few updates have turned the YZ450F into a much better 450cc motocrosser.

Yamaha’s all-new YZ250F shook its class to the core in 2014, dominating shootouts and ultimately rewarding the company with its first AMA 250cc National Motocross Championship since the class turned entirely to a four-stroke engine formula in 2009.

How this little factoid relates to the YZ450F is simple: Since 2010, the big YZ has featured all the same ingredients that made its little sister so awesome in 2014, most notably the revolutionary rearward-slanted-cylinder and reversed cylinder head engine architecture and the zealous attention to mass centralization of the chassis. And yet, the YZ450F has not dominated its more conventional classmates the way that the new 250 did this year.

Yamaha officials claim that the biggest hurtle the 450F had to undertake was just in getting folks to believe that its radical design was superior to the previous design, which had just come off winning the Monster Energy AMA Supercross Championship and was clearly a winner. That may be true, but it is also safe to say that introducing a new engine that delivered quantum leap in horsepower over the previous model also made chassis tuning more of a challenge. There was no question that the YZ450F was fast, but it took a few seasons for Yamaha engineers to sort out the chassis and suspension in order to harness the added power. On the AMA Pro Racing front, rider issues stunted Yamaha’s progress as well. 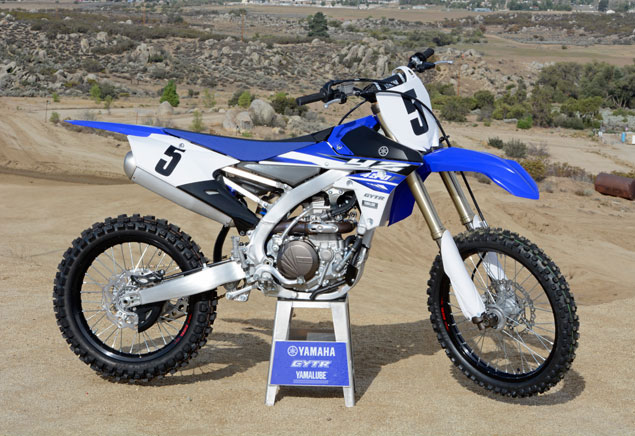 That could change in 2015, as the latest YZ450F may be the most sorted and harmonious version of the reverse-motor models since its introduction. After spending time with Yamaha to sample the bike at Cahuilla Creek Motocross Park near San Diego, we think that Yamaha may finally have made the right changes to out the YZ450F over the top. And with Yamaha reportedly signing Muscle Milk Honda rider Justin Barcia and RCH Suzuki rider Weston Peick to compete aboard the YZ450Fs in the Monster Energy AMA Supercross Series and the Lucas Oil Pro Motocross Championship, the Blu Cru could be well positioned to earn another championship.

And it apparently didn’t take much to improve upon the YZ450F, which underwent a complete overhaul in 2014. During our 2014 Yamaha YZ450F test, we noted that the 450’s redesigned, liquid-cooled, fuel-injected, 449.7cc, DOHC Single was strong from bottom to top, but that its low-end throttle response was not up to par until we tweaked its ECU to richen the fuel curve. We also noted a tendency for the chassis to be nervous at high speeds because the fork tended to dive over small and large impacts. Yamaha has addressed these issues, and more, with the 2015 model. At $8590, the YZ450F only costs $100 more than last year, but it feels like a completely different bike.

The 2015 YZ450F engine keeps the same 97.0 x 60.8mm bore and stroke as last year’s model, and it retains all of the changes made to improve its power delivery over the 2013 model. They include a larger airbox volume, 1mm larger (37mm) titanium intake valves and .5mm larger (30.5mm) exhaust valves, along with reshaped intake and exhaust ports and a slightly increased combustion chamber volume. However, Yamaha engineers have incorporated new ECU and ignition settings to improve the 450’s throttle response as well as give it more low-end torque and better top-end overrev than the 2014. Chassis and suspension changes are also minor for 2015. Yamaha changed the thickness, shape and material of the lower motor mounts to retune the flex characteristics of the 450’s Bilateral Beam aluminum chassis. The new mounts are made out of steel rather than aluminum, but they are also 2mm thinner and feature a U-shape rather than a triangulated shape. Corresponding changes were made to improve the 450’s 12.2-inch travel, 48mm KYB Speed Sensitive System (SSS) front fork. Its outer fork tubes are less rigid than before, and the fork spring stiffness has been increased to .50 kg/mm, up from .49 kg/mm. Out back, the 450F’s fully adjustable KYB monoshock also received minor setting changes to keep its 12.4 inches of rear wheel travel working in harmony with the fork.

Cahuilla Creek was a great place to test the changes made to the YZ450F. It’s a fast layout, with sandy terrain that features deep berms and big jumps—just the right kind of place to put the 2015 model through its pace and see if the changes Yamaha made were the right ones. Our ace test pilot, Ryan Abbatoye, was the same man who delivered our impressions of the 2014 model, so we knew that he would be able to discern whether or not Yamaha’s changes were actual improvements. Right off the bat, Abbatoye said that the changes to the fuel and ignition curves yielded a much cleaner power output.

The YZ450F’s trademark torque is still as sweet as ever. Right from the hit of the throttle, it generates tremendous lunge with a broad torque curve that allows the rider to keep the YZF in the same gear a lot longer than other bikes in its class. The power builds smoothly and with tremendous authority all the way to the rev limiter, and now it does so without any hesitation in throttle response through its Keihin 44mm throttle body.

Abbatoye clearly had a lot of fun blowing up Cahuilla Creek’s sandy berms and rocketing over its big jumps on the YZ450F.

“This bike is definitely a lot snappier than before, and it makes so much power that it is easy to ride in a higher gear now,” Abbatoye said. “Remember that last year I said I felt like I wanted to be in-between gears in the transmission a lot. Not this year. I really like it. It makes pro-level power, but the average rider can just ride it a gear high, and it still makes plenty of torque to launch off the corners and over jumps.”

Part of the motor’s superb feel is due to the fact that Yamaha also dropped the rear sprocket one tooth, going from 49 teeth back to 48 teeth, same as was used on the 2013 model. The YZ450F’s motor is so brawny that it easily takes up the slack of the slightly taller gearing, and the new final gearing matches the ratios in its five-speed transmission to the power output better. If you do need to bang a shift, the 2015 will feel smoother than last year’s because Yamaha changed the bearing on the gear stop lever from a ball bearing-style to a positive roller bearing. If you want to ride in a taller gear, there’s no need to worry about brutalizing the YZ450F’s clutch because it can take the abuse. Yamaha improved it in 2014 by adding 10% stiffer clutch springs and new clutch plate friction material. So, hammer away.

Speaking of hammering, Abbatoye also noticed a big difference in the way the 2015 YZ450F tracks through corners and handles bumps at high speed. Its basic chassis numbers are the same as 2014, with a 58.3-inch wheelbase, and the same rake and trail figures. Yamaha claims a wet weight of 245 lbs. for the YZ450F, but ours tipped the scales at 248.5 lbs., placing 119.4 lbs. on the front wheel and 129.1 lbs. on the rear wheel. Its numbers may be unchanged, but the tweaks made to its chassis and suspension have definitely yielded much better feedback than last year’s bike. Whereas the 2014 model exhibited slightly heavy steering and high-speed jitters even after we made changes to dial-in its suspension, the 2015 turns easier and responds much better to clicker adjustments.

“Once we set the sag, it felt pretty balanced, maybe just a little stiff overall for someone my weight (170 lbs. in full riding gear),” Abbatoye said. “We softened up the compression in the front and went out a little bit on the high-speed (compression adjuster) the rear, and that worked pretty well over any of the bumps I hit at Cahuilla. It turns really well, but coming out of a corner you have to be careful with how you feed it throttle because it wants to wheelie, so you want to make sure that you don’t get lazy. You need to stay over the front and control the bike.”

Bringing the bike down from speed are the same 250mm front and 245mm rear rotors as the 2014 model. Yamaha has yet to step up the diameter size on its front rotor, but the Nissin twin-piston front brake and single-piston rear brake do a fine job. They’re linear and strong without being snatchy. For 2015, Yamaha has fitted the YZ250F’s new, black-anodized Excel rims with Dunlop’s excellent new-gen MX52 tires. The MX52s are designed to excel in medium to hard terrain, yet they worked well in the Cahuilla sand, delivering excellent traction and very good feel. Call us spoiled, but we just happen to know that the MX32s work even better.

Yamaha has worked overtime to centralize the YZ450F’s mass, and its efforts have yielded an extremely slim and compact cockpit as well. Hiding the fuel filler neck for the mid-mounted 2.0-gallon fuel tank allow the rider to climb farther forward on the slim, narrow seat allows the rider to get farther forward on the Yamaha on than on other brands, making the bike easier to crank into turns.

Of course, the YZ450F’s styling is worth noting as well. Its slim bodywork is adorned with “bold new” graphics, but what is cool about the Yamaha is that the graphics are actually embedded in the radiator shrouds, which makes them much harder to peel, and thus more durable. Other detail changes include new Dzus-fasteners with pull tabs that allow the air box lid (or the top of the faux fuel tank) to be removed without requiring a tool. Once again, the YZ450F is available in two color schemes: Team Yamaha Blue/White or the White/Red that recalls Yamaha’s old international racing colors. Both machines also get a snazzy new D.I.D. chain with gold-anodized plates and a new corrosion-resistant coating.

When you boil it down, the 2015 Yamaha YZ450F isn’t all that different than the 2014, and yet the changes that Yamaha made really help the 450 live up to its true potential. It is worlds better than the 2014. All that remains to be seen is whether or not it can become the class champion. 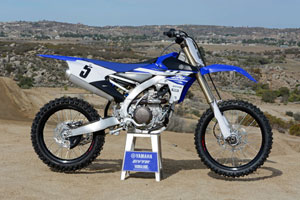