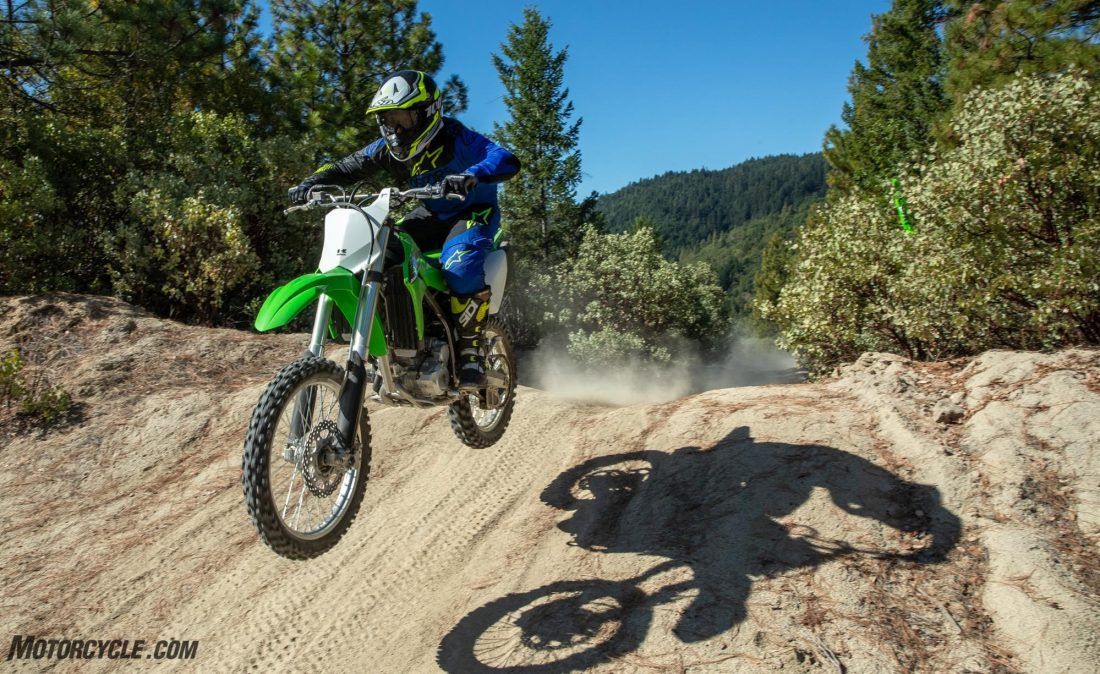 Remember back in the good ol’ days of 2019 when we were gathering en masse, kissin’ hands and shakin’ babies? I do. Well, way back in September of last year MO had the opportunity to test three new Kawasaki motorcycles: the street-legal KLX230, and the off-road only KLX230R and KLX300R. Shortly after, as is usually the case, my reviews went live on Motorcycle.com to tell you all about the KLX230 and KLX230R. Why wasn’t the KLX300R included? Because I was only able to spend a third of one day riding it and honestly, I believed it deserved a more thorough test because it really is a compelling motorcycle for what I think could be a large audience, and at the low price of $5,499, it becomes even moreso.

It’s been a while since Kawasaki had a 300cc trail bike. So long in fact, that some newer riders may not be aware of its long run and popularity in the 1990s through the early 2000s. As interest in trail bikes began to wane and the popularity of sportbikes increased, Kawasaki all but abandoned its off-road lineup, leaving only smaller displacement models like the KLX110 and 140 in production.

Now that trail bikes, dual-sports, and all sorts of off-road motorcycles are some of the only categories on two wheels seeing an uptick in sales, it makes sense that Kawi would jump back into the game and the 300 is back to lead the KLX-R model range.

If you remember the KLX300R from the early aughts, you likely note the similarities of the engine, frame, and overall specs. That’s not necessarily a bad thing. The KLX300R has had a long reputation of being a solid platform and now, it’s kind of in a category of one when considering the market. For those outgrowing bikes like the Honda CRF230, Yamaha TT-R230, or Kawasaki’s own KLX230R, the KLX300R makes total sense for a trail bike that offers better performance and more power without being the least bit intimidating. For street riders interested in riding off-road, again, a fantastic option that will be easy for dirt noobs to hop on and feel comfortable from the first push of that fantastic electric start button. Even experienced riders will come away with an appreciation of what the KLX300R is capable of.

Back to that magic button. The 2020 Kawasaki KLX300R boasts electric start and fuel injection – both things that make living with, riding, and maintaining the new 300 nearly effortless. The 292cc DOHC Single delivers predictable and progressive power across its mid-range and is able to tractor up obstacles fairly easily – within reason. The 34mm throttle body responsible for the bike’s fuel injection is very well metered and incredibly smooth at the throttle. Thumb the starter button and the bike fires up immediately without hesitation and instantly falls into a quiet steady idle.

Ergonomically, the bike feels pretty well-suited for 5-foot 8-inch me. The handlebar is four-position adjustable to help dial in the rider triangle for all sorts of rider preferences and sizes. The footpeg to seat ratio feels spot on and transitioning from sitting to standing feels totally natural. The front fairings shrouding the 2.1-gallon fuel tank and radiators aren’t too wide either, allowing the rider to scoot up easily on the bike when trying to get weight onto the front wheel. It’s only the rather tall tank that will inhibit forward movement. The grippy flat seat also allows for plenty of movement aft as well. The 36.4-inch seat height sounds more intimidating than it actually is, as the shock settles a fair amount once mounted. My 30-inch inseam had no issue getting both boots on level ground.

The six-speed transmission feels nice and precise and clutch pull at the lever is light and unlikely to cause fatigue for most riders. The one issue I found here wasn’t with the transmission or clutch itself, but rather with the distance between the shift lever and the rather small dated-looking footpegs (probably leftovers from the ’90s). The distance between the two constantly caused accidental upshifts or downshifts which, naturally, came at the most inopportune times. Not only was the distance an issue, but the entire lever is far enough away from the engine that even if you’re not pressing the end of the lever with your toe, you’re likely to hit the lever further back with the inside of your boot. With size 10 motocross boots, I feel I’m probably in the average range for most riders so this is likely to be an issue for a lot of people. A new gearshift lever would be the second aftermarket purchase I would make, after addressing the lack of OE-equipped handguards.

Newer riders, intermediate riders, and folks that are content with cruising will be happy with the KLX300R’s KYB 43mm USD fork (adjustable for compression) and gas-charged piggyback linkage-type shock (adjustable for preload, rebound, and compression), both delivering 11.2 inches of travel. Experienced riders who typically find themselves on slower technical trails will also likely be content with the stock suspenders, though will probably tweak the shock’s settings. Bottoming resistance is also commendable, so long as you’re not hucking it at the motocross track. It’s only once the pace really picks up that the stock suspension starts to feel overwhelmed, otherwise, it delivers a comfy, cushy ride.

The relatively short 56.5-inch wheelbase makes the bike easy to maneuver around on tight trails and the 21/18-inch wheel combo keeps the KLX300R compliant over obstacle-strewn terrain. The Dunlop MX52s also provide great traction, although I’ve noticed they don’t tend to last long in rocky desert environments. At a measured 288 pounds full of liquids, the new 300 isn’t too heavy, but if you’ve been riding lighter bikes (maybe a one with a couple less strokes) and you tip over on this one, you’ll be reminded it isn’t the lightest either. The two-piston caliper paired with a single 270mm disc up front does a great job of getting things slowed down while the rear single-piston caliper gives good modulation at the lever and is plenty powerful to stop its 240mm rotor. The front brake lever also offers some adjustment.

The bike’s plastics look entirely modern and shroud the other not-so-modern bits. I dig the choice to use the green/black/gold throwback graphics which are also found on the latest KX models. They give the bike a little extra character.

All in all, the 2020 Kawasaki KLX300R is a great bike. It never feels overly fast or intimidating, but it can handle technical trails, two-trackers, and single track all day. If all-out performance isn’t what you’re looking for, or if you’re new to riding off-road and/or want a bike that won’t break the bank, the resurgence of Kawi’s KLX300R is an indomitable choice. I mean, come on, for $5,499 everyone should have one in their garage.