I must preface this review with the disclaimer that this is the first Beta I’ve ever ridden. I’ve had the opportunity to spend time on various other two strokes in this genre, but the 2021 Beta 300 RR is the first from the Italian brand that I’ve had a chance to get out and ride. So don’t expect a thorough year-to-year comparison. I just can’t do it, captain!

What I can do though was drive 12 hours northeast from our base here in southern California to pop two cherries with one, uh, stone? My first ride on a Beta would also be my first four-day trail ride in Colorado. New bike, new terrain, 12-inch wide trails on the side of 13,000 ft mountains. Why not?

Even though I didn’t get the chance to ride it, the 2020 Beta 300 RR brought with it a host of upgrades that included an all-new chassis including the frame, swingarm, fuel tank, seat, and bodywork. The engine was also equipped with a counterbalance shaft to reduce vibrations. If we consider 2020 a revolutionary model year for the Beta 300, 2021 is more evolutionary with subtle suspension tweaks, sleeker bodywork, higher-quality electronics, and a beefier subframe. 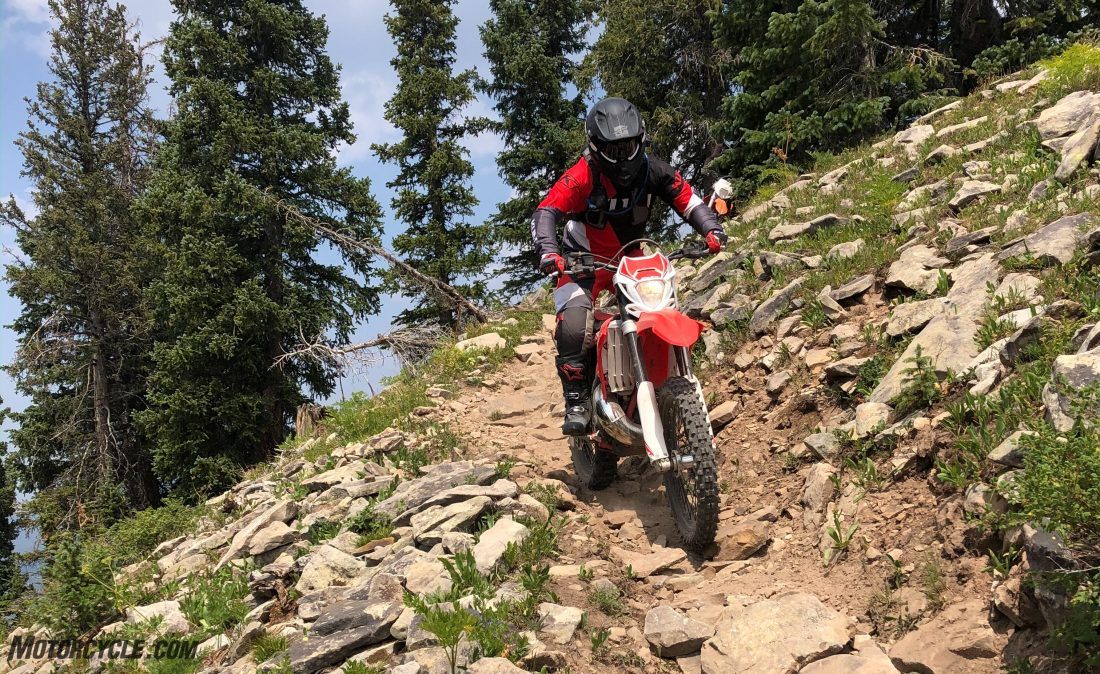 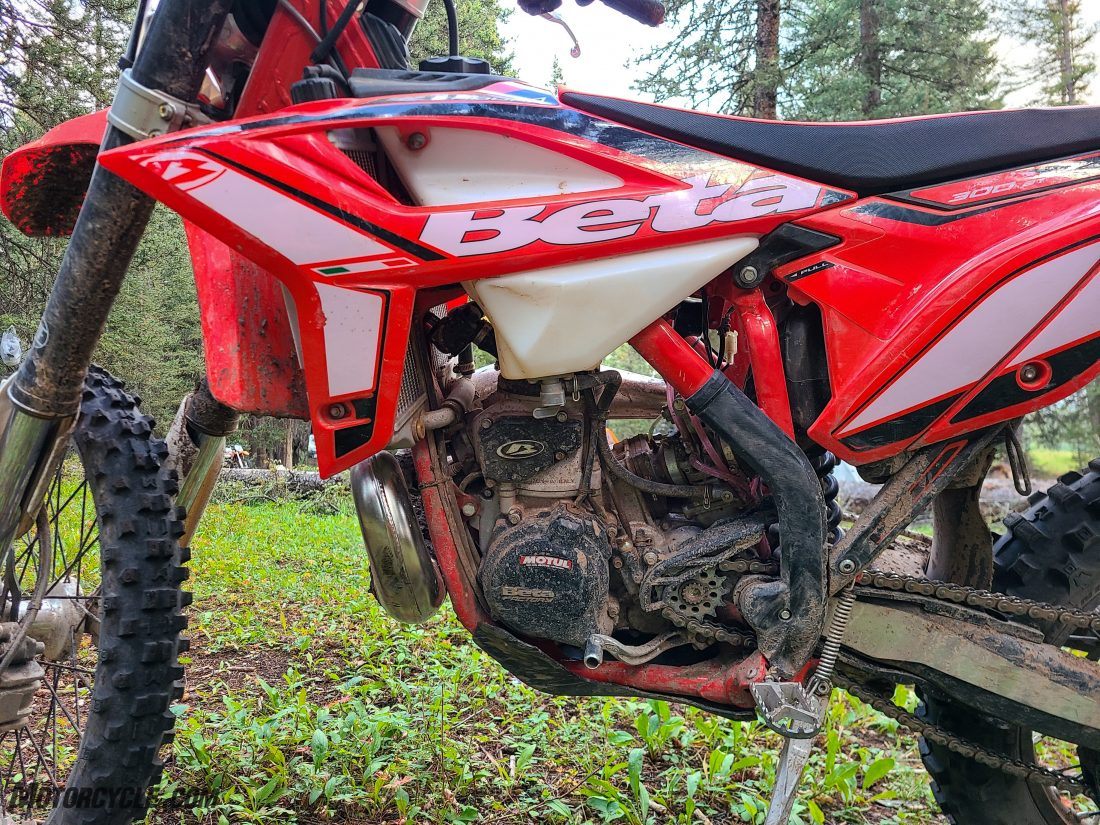 While the Beta-built 293.1cc liquid-cooled two-stroke engine is carbureted, it benefits from oil injection meaning no pre-mixing of gas and oil is necessary. This is achieved by a separate oil tank under the seat that uses engine rpm and a throttle position sensor to vary the metering of oil into the engine. This led to pretty good mileage at approximately 35 mpg with the 2.55-gallon tank providing 90 miles or so of range. There are also two warning indicators: one if your oil reservoir is running low, and another if the system encounters a failure.

The counterbalanced engine quells vibration from the motor significantly. Having the opportunity to ride a ’13 KTM 300 XC-W (not counterbalanced) back-to-back with the 2021 Beta 300 RR proved night and day in terms of the smoothness of the Beta’s engine. Another nice feature of the Beta for those who care about keeping riding areas open versus racing is that the bike is reasonably quiet.

We had to re-jet the 36mm Keihin PXK carburetor since the altitude at camp was over 10,000 feet and temps were a fair bit cooler than California. Thankfully, as with most two-strokes, there is plenty of room to get in there and twist the carb around to get these changes done fairly easily. After the jetting changes, we ended up tweaking the air screw a bit to make it richer off idle.

The Beta 300 RR also has what I’ll call a rain or shine mapping system with the button to change between the “sunny” or “rainy” setting mounted near the steering stem on top of the frame. Effectively, this button delays ignition timing in the “rain” setting so the power comes on later which can be better for slimy wet conditions. Only the last day did I find use for this setting during one of our trails which had the most mud, rocks, and roots. The rest of the time, I found “sunny” to be just fine for most riding and would likely never switch it back home in southern California.

Beta says this about its RR models:

“Our RR models are designed for a casual off road rider or racer that is looking for more than just a play bike. We take pride in our slogan “Rideability” as it truly points out the real strength of a Beta. Others are focused 90% on building a race bike that is sold to the average rider. Beta takes pride in designing a motorcycle that appeals to the ‘common’ rider. The layout of the engine, the lower seat height, and the smooth power delivery are all traits of the bikes that provide the average rider more confidence.”

While I never ended up tweaking the adjustable power valve (Beta sells an accessory knob so riders are able to easily adjust the power valve without tools), the low-end power delivery seemed a bit softer than expected, even causing the bike to flame out when I tried to tractor the motor down too low in the revs. This soft power delivery could be welcome in “east coast” riding conditions, but it didn’t deliver the same low-rpm punch that pulls hard into the mid-range that I’ve experienced on KTM 300 and 250 two-strokes. That’s not to say that the power isn’t there once you get closer to its mid-range, though. The engine still delivers plenty of umph once it starts spinning faster.

The six-speed wide ratio transmission is great for wide-open spaces and worked nearly as well in tight places. The Brembo hydraulic clutch gives smooth positive actuation without being remotely fatiguing. I would say, for the tight trail work I would be interested in doing with this bike, I would change the final drive ratios from the stock 14/48 to something around 13/52.

Although you could never get away with plating the Beta 300 RR here in California, the bike comes all wired up and ready for turn signals with the left switchgear, including buttons for brights, a horn, and indicators should you live in an area where you can license a two-stroke and are so inclined. It even comes with a nice display that shows speed, average speed, maximum speed, total miles, trip meter, hour meter, and battery voltage and is flanked by warning lights.

“Designed for a casual off road rider or racer” 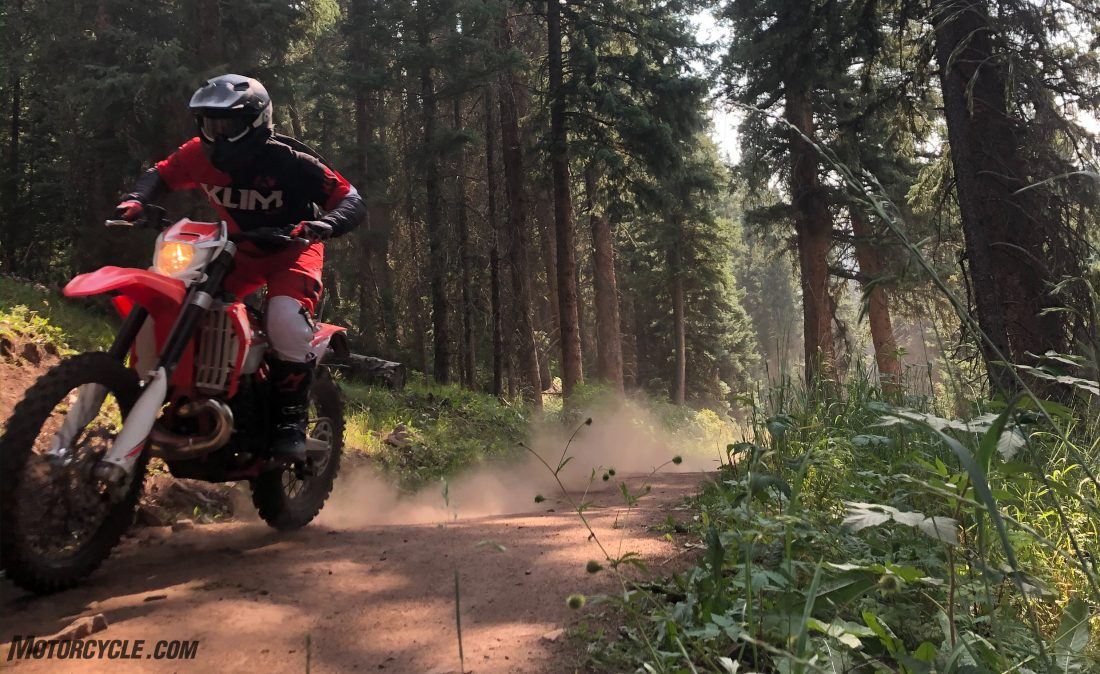 Hmm. Designed for both the casual rider and racer. How do you go about doing that? I suppose the smooth power delivery, relatively low 36.6-inch seat height (it doesn’t feel that high), ability to add DOT-required necessities, oil injection, and electric start do make the 300 RR an approachable machine for anyone. Also keeping with the ease of use theme, the airbox cover and seat can be removed without any tools or keys. The seat easily pops off via a button located on the left rear fender. At the same time, if I were to race this bike, there are some changes I would make. While I already mentioned the gearing change, wrap-around handguards are probably the only other things I would do if I wanted to enter a race with the Beta 300 RR. I guess they’re right, it is a pretty great bike for everyone.

The handlebars are six-way adjustable and the seat-to-footpeg distance is quite comfortable for 5-foot 8-inch me. What’s not comfortable is the seat. Oh man. If you plan on sitting for any amount of time, you’ll want to replace it immediately.

One thing a casual rider might consider changing, unless we’re talking about aggressive weekend warriors, is the suspension. I found the suspension fairly stiff at the stock settings for my 185 pounds (with gear), but it’s really quite well-damped front and rear. It never felt harsh. I added some preload to the fork which helped the front end feel more planted, but aside from that, I was quite happy with the 48mm Sachs fork and Sachs linkage-type shock. Both are fully adjustable with the fork’s adjustments all able to be made from the top of the fork tubes without tools. The fork and shock provide 11.6 and 11.4 inches of wheel travel, respectively.

Once the pace ramps up, the suspension works even better, and you forget how jarring it can feel while going slow over bumpy terrain. The rigidity of the chassis, the suspension, and the Michelin Enduro tires all provide an excellent stable platform that stays compliant at speed without deflecting. The 300 RR feels nimble through tight trees as well; it was only the lack of low-end punch that left me wanting in those scenarios.

The Nissin two-piston front caliper bites a 260mm rotor while a single-piston caliper squeezes the rear 240mm rotor. It took me a little while to get used to the front brake. The initial bite isn’t too bad, but the stopping power ramps up quite quickly afterward meaning that the line between stopping quickly and locking the front is a fine one. As for the rear brake, I really appreciated the size and position of the pedal which made it easy to modulate.

To top it all off, the Beta 300 RR is one of the lowest priced bikes, if not the lowest, in its category at $9,199. That’s a great deal, particularly for riders looking for a casual, yet highly capable enduro bike. The biggest let down for me was the lack of a strong low-end hit and pull into the mid-range. It’s one of the things I love about the KTM’s I’ve ridden. If you’re not bothered by the softer smoother power delivery at low rpm, this bike is just as good as anything else out there. 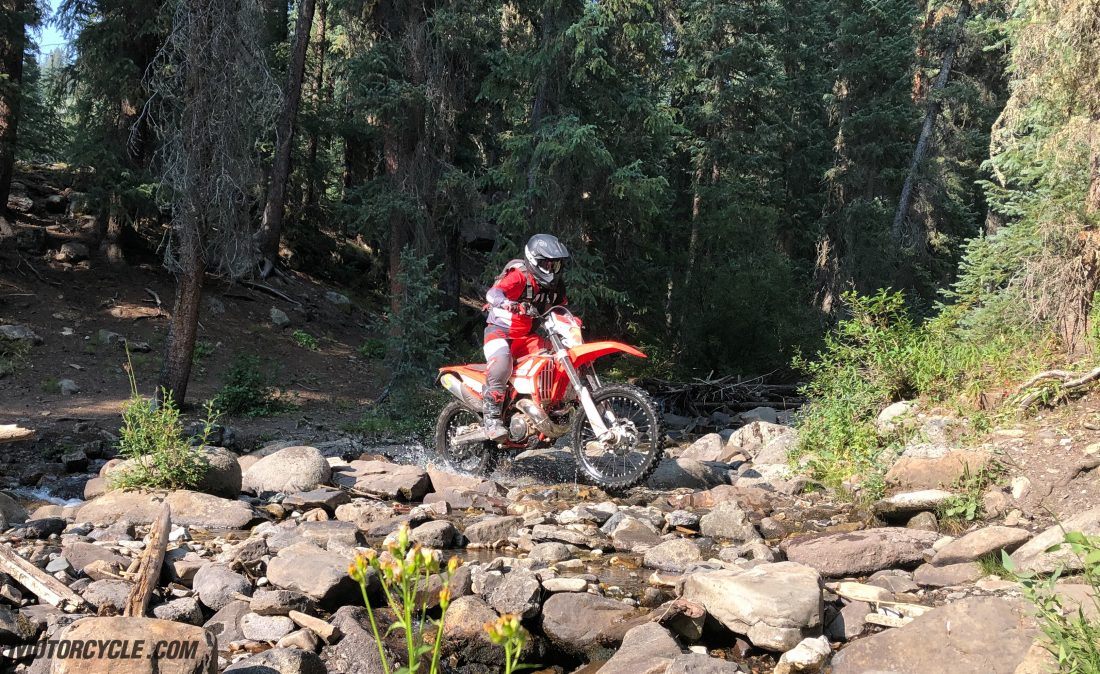