Beta is one of those companies that somehow manages to punch way, way, above its weight when it comes to battling its much larger rivals from Europe and Japan in the high-performance off-road motorcycle market, and its 350 RR off-road model may just be the best example of that.

Based in Rignano sull’Arno, about 12 miles southeast of Florence, the tiny Italian factory has a proven track record of producing championship-winning trials bikes and, more recently, off-road machines that are capable of winning at the national and World Championship levels. The company is perhaps better known in Europe, but thanks to the tireless passion of its U.S. distributor, Beta U.S.A., Beta has made its share of winning knobby tracks in American off-road racing. Need examples? Prior to switching to Beta’s orange rivals from Austria, American-born international off-road star Cody Webb walked away with the 2014 GEICO AMA EnduroCross Championship aboard a Beta. In the high-speed world of AMA National Hare & Hound and AMA West Hare Scrambles, the Purvines Racing Beta team is a perennial challenger for both race wins and the overall championship.

Of course, rider talent and good old-fashioned luck can play a part in any racing effort, but the bottom line is that a competitive motorcycle has to be rugged and dependable as well as fast to survive in the often brutal and unpredictable environment that off-road racing presents. Beta is clearly doing something right. 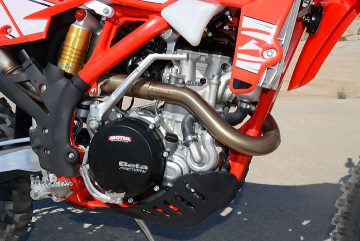 Beta has loads of experience manufacturing World Championship-level trials bikes, so it’s no surprise that the 350 RR’s fuel-injected, DOHC, four-valve Single has a persona that would remind one of a trials bike. But don’t take that to mean that it’s slow, because it isn’t. In fact, it may be the brawniest-feeling 349.1cc four-stroke off-road engine on the market. Its 88mm bore and 57.4mm stroke produce one rev-happy engine. Beta engineers have shown the engine a lot of love in the past two years, redesigning its die-cast cases to make them lighter and compact and centralize mass as well as shaving weight and reducing rotational mass. One of the key components is Beta’s F1-style bridged box piston, which offers less weight while remaining rigid and reliable. The piston pin is coated with a Diamond-Like-Carbon (DLC) treatment to minimize friction and wear.

On the trail the 350 RR delivers excellent torque with amazing, ground-grabbing tractability. The meat of the power is concentrated in the low-end and mid-range, with the power thinning out only slightly as you approach the engine’s 13,000 rpm rev limit, which is 500 rpm higher than the 2015 model’s rev limit. So if you like to scream the engine in a lower gear, you certainly can.

But the beauty of the 350 RR is that you don’t have to. There is plenty of grunt complemented by excellent throttle response from the Beta’s all-new fuel-injection system. Designed by Synerject, it incorporates a 42mm throttle body that utilizes an electric stepper motor designed to reduce engine braking, and Beta dealers can adjust it to one of three settings to tailor the engine braking to the rider’s preference. Thumb the 350 RR’s convenient electric-start system and the engine fires up without hassle. Not that we needed it, but we’re glad that Beta still believes in incorporating a kick-starter for backup, something that its Austrian competitors have eliminated. We question that wisdom, as we have killed the battery on at least one other brand’s electric-only model that proved to be difficult to start.

Head out into your favorite cabbage patch, and you’ll appreciate the Beta engine’s ability to loft the front end over obstacles with little more than a blip of the throttle where similar-sized engines might require a slap of the clutch to do the same. The 350 RR’s hydraulically activated clutch and six-speed transmission are smooth, and engagement is positive thanks to an updated shifting detent lever. The gear ratios Beta selected also match the 350’s power output quite well. However, with its broad power output, you don’t have to shift a lot to keep the Beta singing. It never balks at being lugged, allowing the rider to select a gear and focus on the terrain ahead—and the snarlier and more technical, the better. In fast terrain, the 350 RR motor is more than up to the task of running with 250cc two-strokes and other four-strokes in its class. We love this motor!

We have mixed feelings about the 350 RR’s chassis, which is clearly designed more for eastern-style wooded terrain than it is for wide-open desert. Sourced from Beta’s 2015 Factory model, the backbone-style chrome moly chassis and aluminum swingarm are worthy of an art collection. The 350 RR rides on a 58.7-inch wheelbase with a 26.5-degree rake. The Beta’s steering is light and responsive at all speeds, but warp-drive straight-line riding tends to make the 350 RR a tad nervous. For western riding, we would definitely recommend a steering stabilizer.

But again, when ridden in its element—tight and technical, rock- or root-infested terrain—the Beta is an alpha. Direction changes require little more than a nod of the rider’s head, and front end traction is plentiful. The 350 RR doesn’t feel like the lightest bike on the trail, but Beta’s mass centralization pays off in a responsive chassis that allows the rider to pick his or her way through some pretty daunting obstacles—dare we say it—almost like a trials bike. 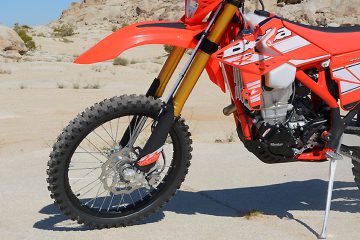 Despite its Italian roots, the Beta uses German-made Sachs suspension components. Our experience is that the 48mm USD fork and piggyback reservoir shock continue to improve thanks to much collaboration between Beta and Sachs. Up front, the Gen4 open-cartridge coil-spring fork uses a piston design with what Beta calls “three slot” geometry intended to improve the oil flow and make it more direct for give the fork a more progressive feel in large bumps. Beta has also worked to improve the fork’s initial smoothness as well. To that end, a spring-support release system is used to eliminate rotational friction, and the tolerances of the sleeves and bushings are as tight as possible to actually reduce friction.

Out back, the aluminum-bodied Sachs piggyback reservoir shock, which connects to a rising-rate linkage, features an internal piston with oil passages that are designed to improve flow and run cooler to help resist fading. The shock features high- and low-speed compression damping as well as rebound damping and preload adjustability. Suspension travel is 11.4 inches front and rear.

After spending some time with the 350 RR, we can say that Beta continues to develop the Sachs suspension in the right direction, although the fork and shock are clearly favor eastern-style enduro trudgery over western-style desert bombing. Initial plushness is definitely improved, which helped to reduce deflection whenever we caught a rock off-center, and the Beta feels smooth and controlled at both ends as long as the rider isn’t pushing the envelope at high speeds over rough terrain. It’s there where both the fork and shock could use some more development, as our test crew noticed a tendency for both ends to feel stiff in the middle of the stroke.

We never felt any any loss of control through such obstacles as big sand whoops, it just made the bike feel as if it has less suspension travel than it really does. For high-speed hare scramble or hare & hound work, we would recommend working with a suspension specialist to get the most out of the Sachs units, and you may need to look no farther than Beta U.S.A. for that. The distributor has an expert in-house suspension division and is happy to work hands-on with its customers to dial-in their scoots. Then again, for eastern-style technical riding, we’d just leave it alone.

Beta sources its brakes from Nissin, and its 260mm floating rotor/two-piston caliper up front and 240mm rotor/Nissin single-piston caliper out back deliver excellent performance. That said, we were surprised at just how aggressive they were; it takes little time to adjust to them.

The 350 RR’s ergos also continue to improve. For 2016, Beta switched to a softer seat foam, and it makes a substantial difference in rider comfort on long rides. The Beta’s cockpit is slim and roomy overall, and its bars offer excellent leverage, although some of our testers found its bend to be a little low when they were in a standing position on the pegs. Otherwise, the 350 RR delivers a comfy ergonomic triangle, and its seat and radiator shrouds enhance its slim feel. We’re also big fans of the Beta’s multi-functional meter, which offers lots of useful data including speed, odometer, dual trip meters, a clock, and max speed and average speed readouts.

But what else impresses us about the Beta is that you simply won’t mistake it for any other Japanese or European brand out there. Its red bodywork and distinctive Italian lines are enough to get the blood boiling, but Beta also hasn’t forgotten the practical details. One of our favorites is the 350 RR’s integrated rear grab handles, which actually do give the rider leverage to yank the rear-end clear of a hole or other impassable obstacle. Trust us, if you ride the Beta in the dank, hellish chasms where it was meant to tread, they are a godsend. 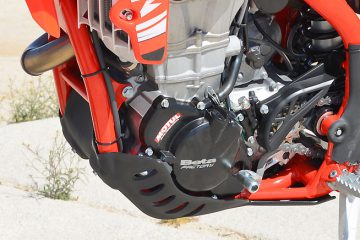 And there are other neat items worth noting, such as the tool storage under the left side number plate (it’s large enough to store a spare inner tube if you carry your tools in backpack or fanny pack) and the easy-access seat, which requires the simple push of a button to remove it and expose the air filter for easy servicing. We also like the Beta’s opaque 2.0-gallon fuel cell, which makes it easy to see just how much fuel is left in the tank. Unlike some of its competition, Beta also didn’t forget to protect the undercarriage of the 350 RR; it features a heavy-duty skid plate to diffuse impacts from rocks and other items. On the other hand—pardon the pun—we are disappointed that the 350 RR does not come fitted with handguards, something every off-road motorcycle should have.

Overall, however, we are beyond stoked with the 350 RR, mainly on the strength of its awesome engine performance. Sure, there are some things we would change or like to see improved, but this is the first off-road Beta we’ve tested in a long time, and it is night-and-day better than its ancestors. It’s also on par with its European and Japanese peers in terms of overall performance, fit and finish.

And then there’s that X factor that comes with owning a motorcycle that you just won’t see everywhere else. That may change as more people catch on to the value of the brand, but for now the 350 RR is a supremely capable Italian exotic that is tough enough to run with any bike in it is displacement class and quite a few above it. 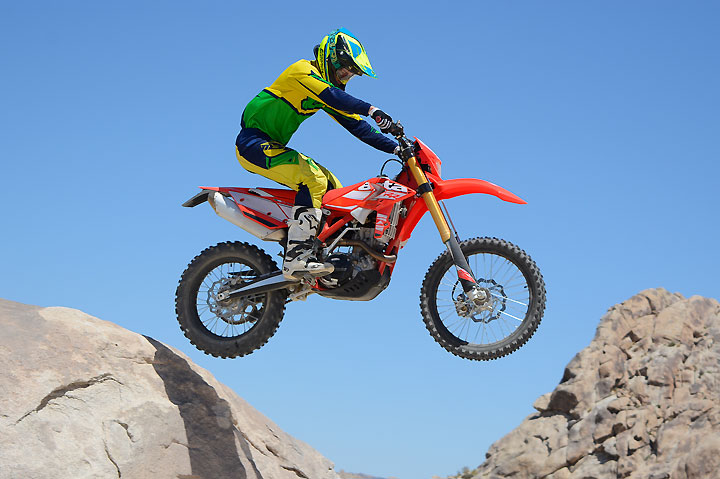