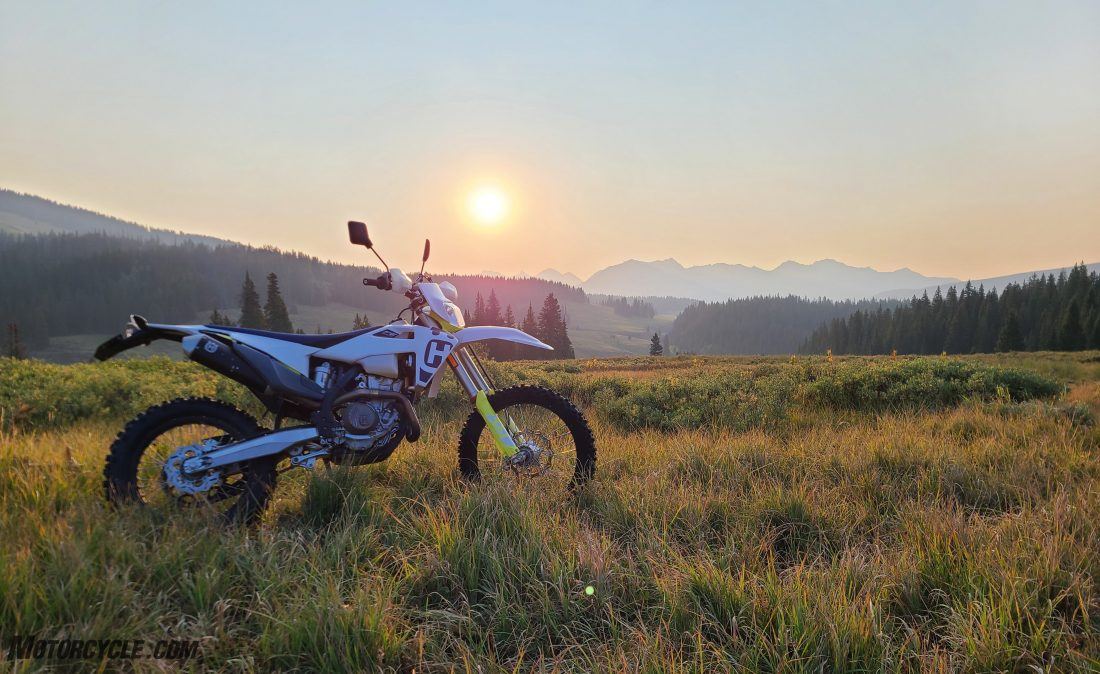 Tractoring up the single-track ascent, switchback after switchback with relative ease, a few thoughts ran through my head. One, this thing’s street-legal. Two, it’s kicking ass on this trail. Three, two-strokes aren’t the only machines that can be comfortable doing technical trail work. Admittedly, I’ve become somewhat smitten with my own two-stroke dirtbike, so much so that I had forgotten just how well a four-stroke can handle similar terrain, despite having begun my off-road riding career on a four-stroke 250.

The Husqvarna FE 350s manages to bridge the gap between 250 top-end and 450 grunt while maintaining the lightweight handling and maneuverability of the former. The lowercase s in the model’s name denotes it’s street-legal status. Like other FE models, the 350s gets top shelf componentry making it a great choice for those looking for a nimble dual-sport motorcycle. Similar to KTM’s EXC-F line, Husqvarna’s 350 is by no means a lower-spec lower displacement machine; rather the FE 350s combines some of the best characteristics of smaller and larger machines into what might just be the “goldilocks” package for size and power. 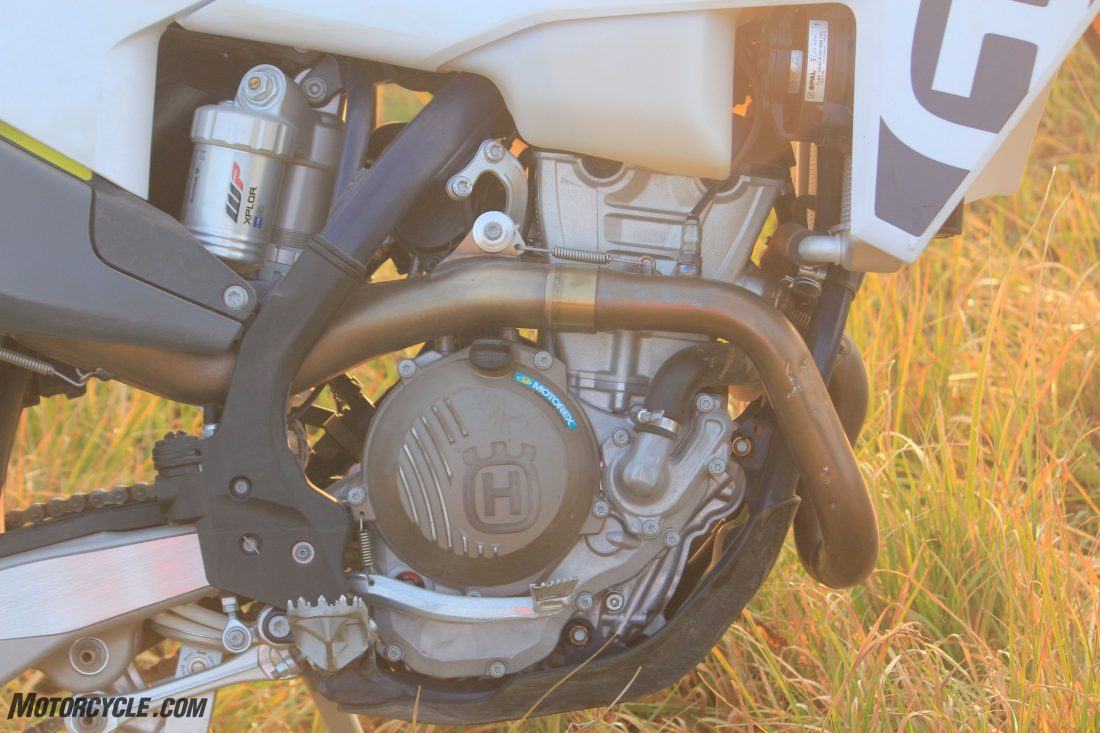 The 350cc DOHC four-stroke Single uses much of the architecture from the now-defunct FE 250 (Husqvarna will only offer 350 and 501 “enduro” models for 2021), allowing the engine to remain compact and light despite the mid-level displacement. The FE’s Single is comfortable cruising at 60 mph down the highway while still having a little umph left to give should you need it. On the trail though, it’s the low- to mid-range torque that keeps the FE 350s pulling through technical climbs when one might expect a higher-revving Single to flame out.

For 2020, the engine receives slight updates throughout. Camshaft timing has been revised, and a focus was placed on reducing friction with a DLC coating added to the finger followers pushing titanium valves. The cylinder head features new cooling architecture, and with a new head gasket, compression ratio increases from 12.3:1 to 13.5:1. The forged bridged-box-type aluminum piston also keeps oscillating mass low, which adds to the motor’s free-spinning nature. The lightweight die-cast casings house the new six-speed Pankl Racing Systems gearbox which operates positively and effortlessly with the Dampened Diaphragm Steel (DDS) clutch and Magura hydraulic system. A single diaphragm steel pressure plate versus traditional coil springs makes the clutch pull very light while also integrating a damping system for better traction and durability.

Husqvarna says the engine itself weighs 61.5 pounds, which makes up a little under a quarter of the bike’s total weight of 254 lbs (fully fueled and ready to rip). 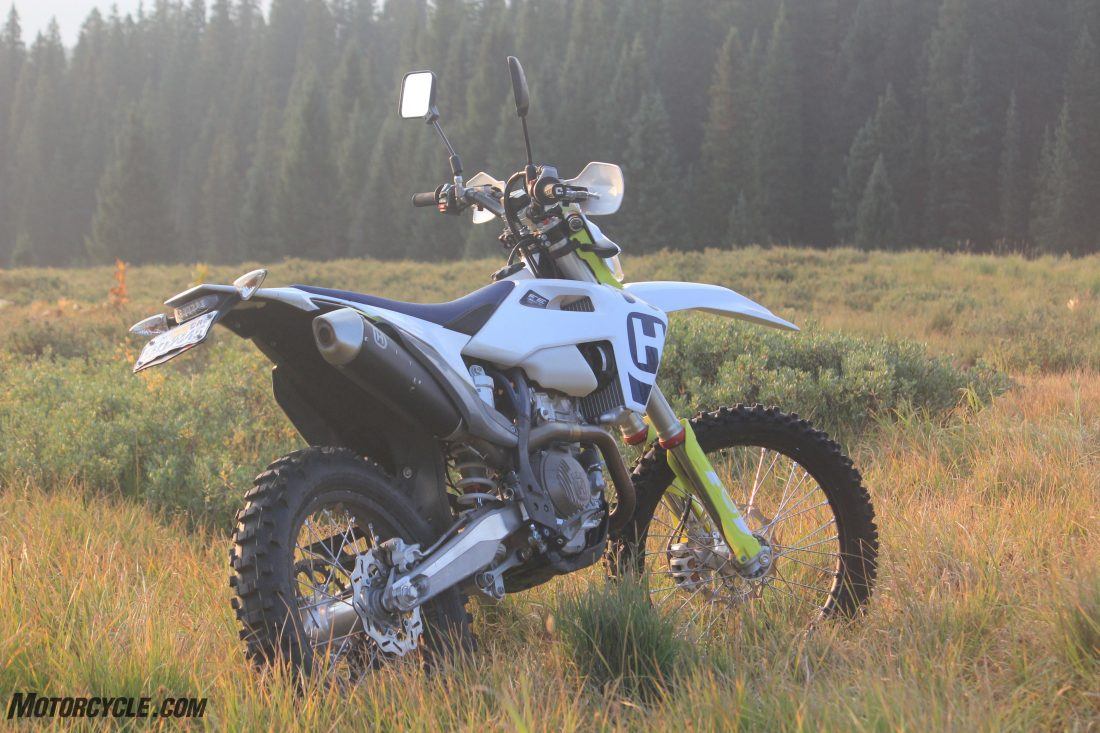 As one might expect, WP suspenders are used fore and aft. The XPLOR fork that we’ve lauded with praise on many different models provides nearly 12 inches of travel from its open cartridge layout. For those unfamiliar with the XPLOR setup, both fork tubes include springs, but separate damping functions with rebound on the right and compression on the left. Damping can be easily adjusted by hand via the clickers on top of the fork tubes, each of which offers 30 clicks of adjustment. The preload adjusters on each fork leg allow for easier adjustment without the use of tools, as well.

Out back, the WP XACT shock also delivers full adjustability and 11.8 inches of travel. Unlike many of its orange brethren, the FE 350s uses a linkage-type suspension which is the same system used in the Husqvarna motocross range. Both high and low speed compression damping can be adjusted as well as preload and rebound, all of which use a standard setup for adjustment. 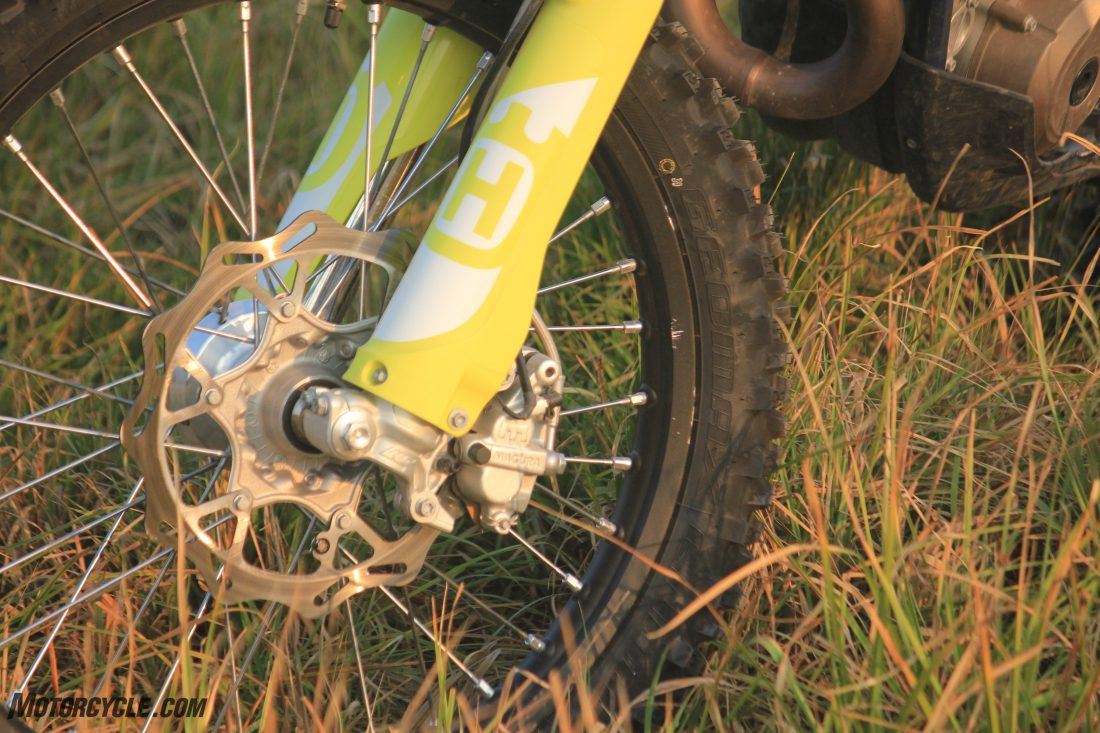 Magura components handle the stopping power on the 350, with a single 260 mm rotor and dual-piston setup up front and a single-piston caliper with a 220 mm rotor on the rear. Both the front and rear brake are easily modulated off-road. 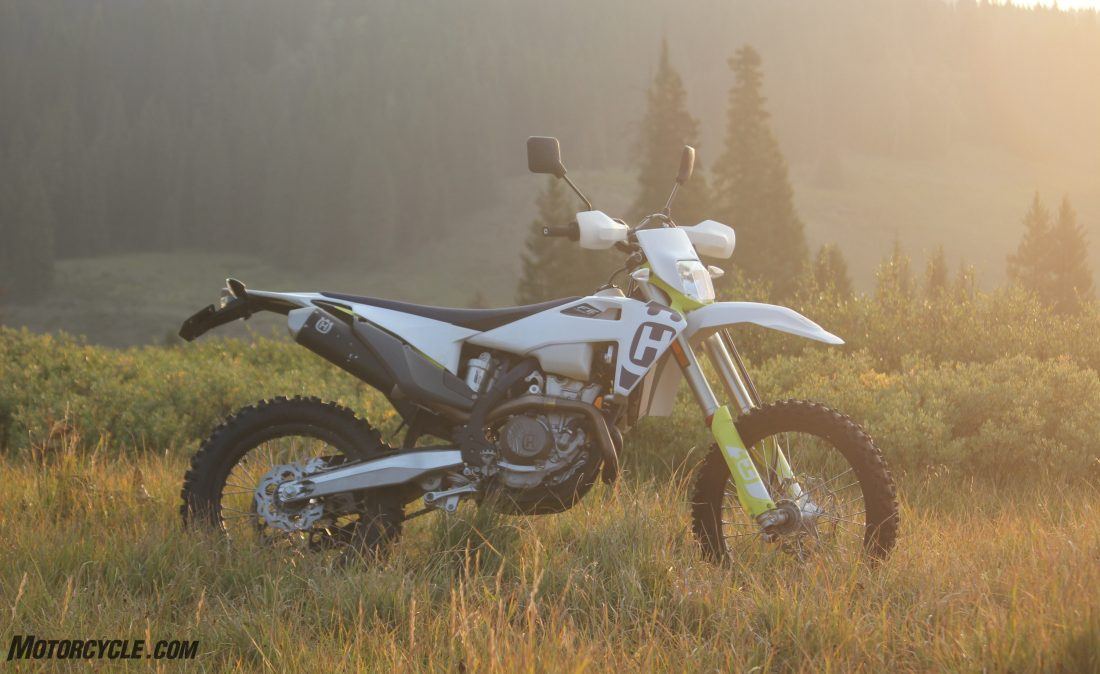 There are a lot of niceties on modern dirtbikes and dual-sports. Electric start, or “the magic button” as some of my older riding buddies call it, is one of them. The FE also comes with a lightweight lithium-ion battery. Fuel injection is another welcome tech upgrade. The FE 350s uses a 42mm Keihin throttle body that’s positioned to ensure the most efficient flow into the combustion chamber. The throttle cable is mounted directly without a throttle linkage to provide immediate throttle response and improved feel. The 2.25-gallon tank provides enough fuel for approximately 130 miles (as always… you know the drill).

Then, of course, you have all of the necessary bits to make the bike street-legal. Turn signals, license plate holder, mirrors, lights, etc. The small LCD dash relays all of the standard information you might want (odo, trips, speed, so on and so forth).

Where the rubber meets the dirt 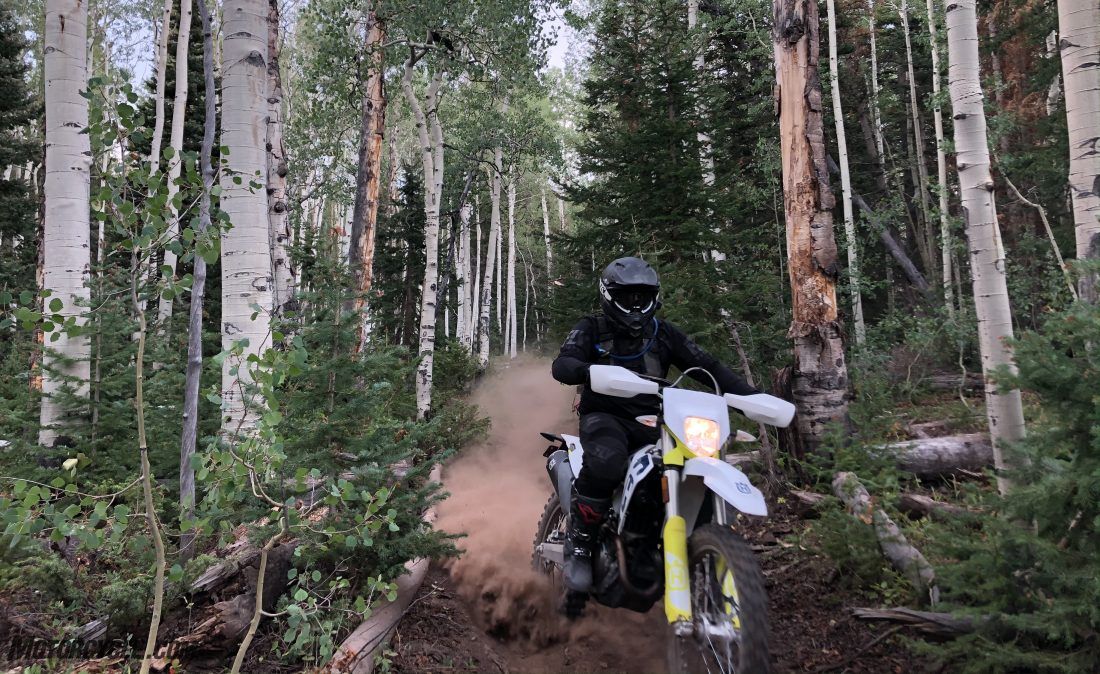 Back to my first thoughts. I didn’t get to spend multiple days back-to-back riding the FE 350s, but I did manage to log nearly 100 miles during my day riding, almost all of which was off-road and about 70% Colorado single-track.

When I first set off down the gravel road from camp, the front tire would push at even the slightest of turns. It was a slick gravel road, but after a few miles to the trailhead, I decided some work needed to be done before we started our ride. The fork tubes were all the way down in the triple clamps so I raised them up to the highest of the three markers which left just barely enough room to still be able to adjust damping and preload. This made a massive difference and adding a little preload helped as well. The bike was back to being its normal quick handling self. I also screwed the adjustable steering locks all the way in so I’d have maximum maneuverability while we were dicing through trees.

Off we went. Almost immediately, I was faced with switchback after switchback as we gained elevation rapidly. I was prepared to be using a lot of clutch for the tight uphill single-track but was pleasantly surprised that the motor would lug down pretty low without feeling like it was going to stall. Furthermore, around each uphill hairpin turn, the motor had plenty of grunt at low rpm to loft the front wheel for tight pivot turns.

During a particularly fun trail snaking through Aspens, it also became evident just how quick and nimble the FE 350s could handle a tight flowing trail. The bike soaked up bumps like a Cadillac and remained composed while effortlessly darting between trees. That was one of the faster trails of the day and the bike handled it really well.

Later in the day in the day we hit a trail that was new to all of us thanks to a new trail plan implemented a few months ago. The new trail proved to be steep and unrelenting all the way to the top. Again, the Husqvarna FE 350s left me wondering why it had been so long since I’d ridden a four-stroke on tight single-track. The suspension handled the slow going steep climbs very well keeping the tires planted and biting during the ascent. Boulders and rock ledges between and in the middle of switchbacks were no match for the Husqvarna. Even during all of the slow going, the bike never managed to boil its gas or spit coolant. While I had started the day worrying about frying the clutch due to the stock gearing, I ended up having zero issues.

“Man,” I thought to myself during the aforementioned new trail, “this bike has really surprised me.” As I mentioned in the beginning, the best part of all of this was that the FE 350s is street-legal and kicking ass on even the most technical trails we rode that day.

With all of that adoration heaped on the white bike, could it get better? The answer to that question is yes. I dialed in the suspension damping a bit at both ends to better suit the riding we were doing, and while I didn’t deviate far from the manufacturer specs, that was probably more of a result of the terrain suiting the suspension than vice versa. I imagine the 350s would have felt soft in the California desert’s wide open expanses at speed.

Getting a license plate on a bike like the 350 requires more than just slapping turn signals and lights on a bike and calling it good. Regulatory emissions standards have to be considered from the engine itself, to the exhaust, to how much noise the tires make on the ground and performance is almost always lost at this expense. If you don’t need a plate and you want more performance, the FE model (sans s) should do the trick.

For technical riding, if I were to purchase the FE 350s, there would be a small handful of mods that I would make before I ever hit the trail. One of the first things I would do would be changing the final drive gearing. Dropping one tooth on the countershaft sprocket and adding two or four to the rear. Also, a tire swap would be required. The TKC80s are fine if you’re doing mostly street or fire roads, but for anything more, the benefits of full knobbies can’t be overstated. I’d definitely swap out the stock mirrors for something a little less intrusive – and probably only use one. Wrap around handguards I’ve also found to be a necessity (more on that in an upcoming story). I would get out and ride it in some of my favorite areas before doing any suspension work, but for my purposes, which include as little street and fire road as possible, I’d probably bump up the suspension’s spring rates. 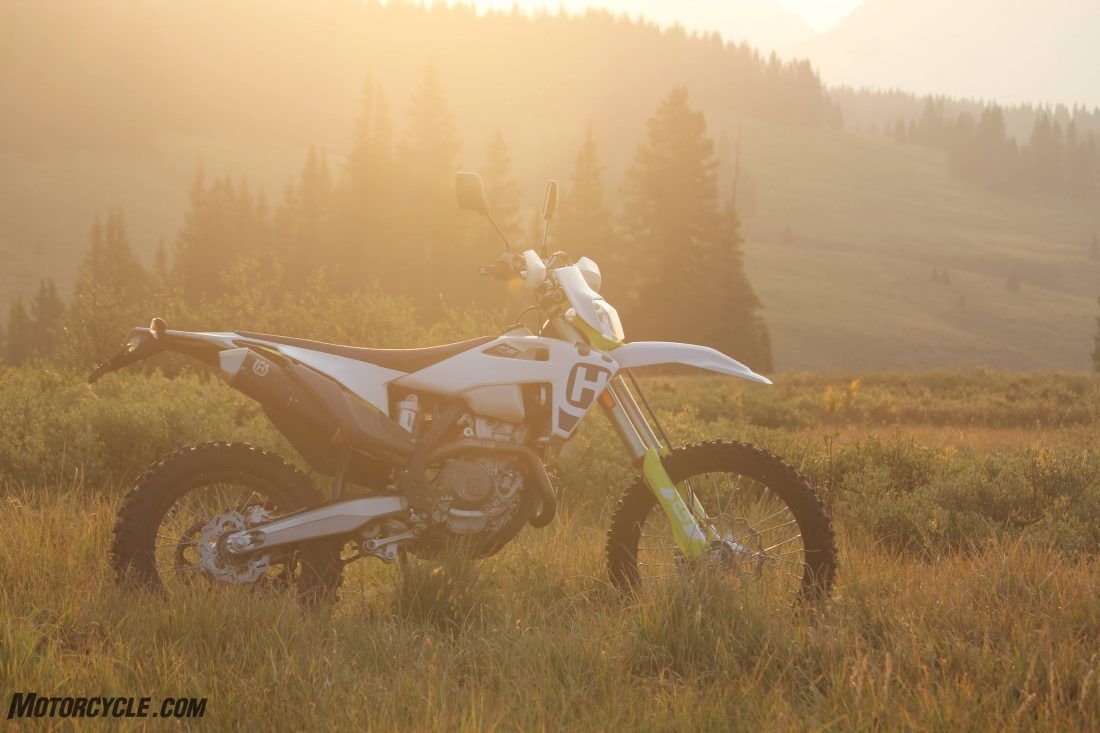 As we always say though, your mileage may vary. If you see yourself using the bike for commuting, going to school, some trails, etc., you’ll probably be fine leaving the bike bone stock. It all depends what you’re planning to do with it. Other than Husqvarna throwing some propper knobbies on it, I rode the bike in stock form and it impressed me so much that my riding buddies were probably tired of hearing about it at each snack stop. The FE 350s is a great platform that I thoroughly enjoyed off-road – and it’s street-legal! At $11,099, the price of admission isn’t cheap, but you’d be hard pressed to find a bike that handles nearly every situation as well as the FE 350s does.